SO MUCH OUTSIDE TIME

Well, I didn't work out today, but I did slide down a twenty foot muddy embankment wearing a sundress and sandals while holding a camera in one hand and a toddler under my arm, so that's probably enough. I should have learned a long time ago to expect semi-expert levels of backwoods adventure every time I leave the house, but since I spent Sunday afternoon kayaking in a maxidress and today rock climbing in a sundress the lesson has obviously not sunk in. 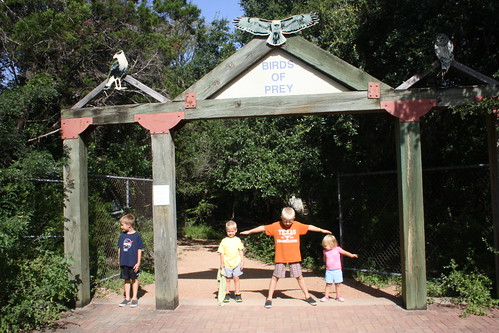 The kids found a gate to the nature preserve at the back of the Birds of Prey exhibit that none of us could resist, so we abandoned the stroller and struck off through the woods. The path was nice and wide and flat for a few hundred feet and then branched off into three paths; two were also nice and wide and flat and one of them snaked quickly downhill and out of sight. We took the road less traveled, literally, and that's how we ended up shimmying down the hillside into the river bottom. Those giant limestone boulders and cliffs were just too inviting for me to say "Hey, that's really cool, let's come back when I'm wearing some freaking JEANS OR SOMETHING." Fortunately, no one was there to see my undies. 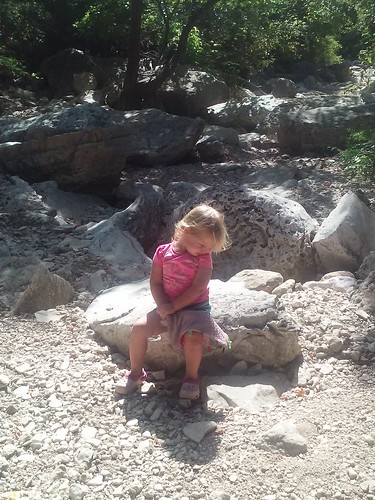 Some people might find it unsettling when their kids scatter into the woods and then scale a thirty foot rock cliff. Not me! 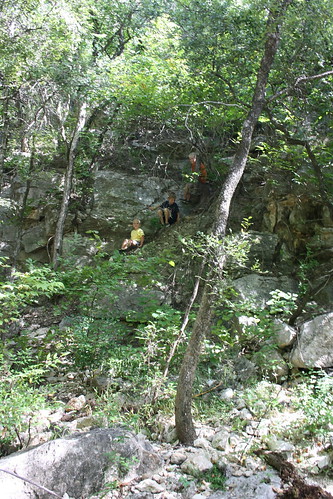 We tried to hike some more after that but two of the kids had lying down tantrums right there in the middle of the woods when the boys couldn't agree who would get to walk first and Mary insisted on being carried everywhere.

Mary rounded out the tantrum trifecta when we walked back to the nature center to explore the fossil room. 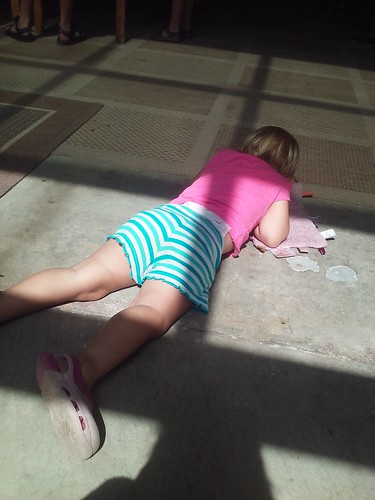 Obviously we headed to lunch after that. 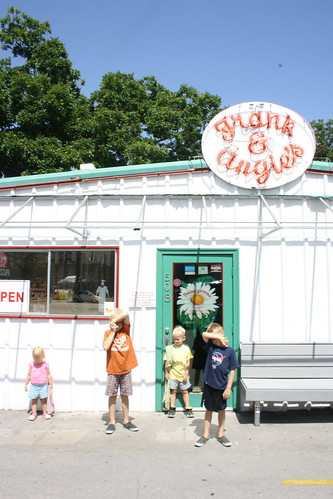 Wes was looking extra grown up. 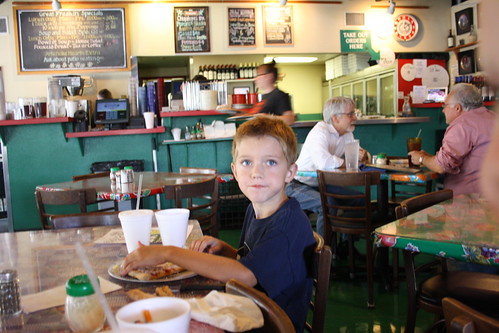 A burly construction walked in wearing a bandana on his head and James, startled, dropped his drink, and exclaimed loudly "MOMMY A PIRATE IS HERE!"

After he begged me for fifteen minutes I finally gave in and ordered Charley a side of anchovies to put on his cheese pizza. They brought them out in a horrifying little cup. Charley gamely put three on his pizza and ate very, very slowly until I told him not to worry about finishing them. He was relieved. He talked about it all afternoon, "I do NOT like anchovies, but at least I know that now!" James tried one too, chewed slowly for several seconds, took a deep breath and swallowed it, then downed the rest of his water. Unsurprisingly Wes was not interested.

After pizza we headed back to the park to visit the botanical gardens so we could see the compost exhibit and also so we could get home at that 1:30 nap sweet spot (which failed, by the way, since Mary fell asleep just outside the car-to-crib transfer window of twenty minutes, it was more like twenty-five minutes and she felt FRESH AS A DAISY when I tried to put her in her crib at home).

It was a beautiful place to walk (up the same hill twice for separate bathroom visits ten minutes apart). We saw vegetable gardens and herb gardens and rose gardens and ten different methods for making compost. There were magical fish ponds and big grassy areas to run in. The kids were especially enchanted by the half-dozen daddy long legs Wes found on the wall in the men's room. Do you know how long their legs move when you remove them from their bodies (if you are psychotic)? A long, long time.

We all loved the prehistoric garden. 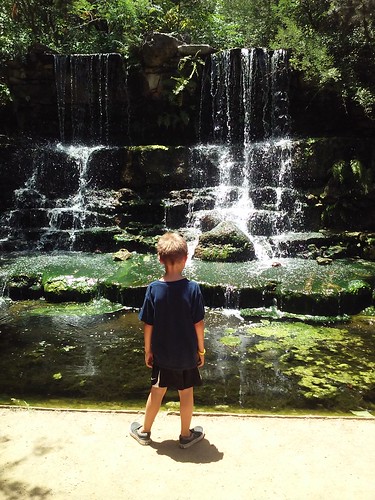 Mary rode in the carrier instead of the stroller (at this point in the day the more free range *walking* option was not practical), which was great until I slipped on some gravel and fell sitting on my foot and scratched the hell out of my shin and ankle (Mary was fine, love the Ergo). Several minutes later I looked down and noticed I was bleeding, which Charley thought was really amazing and kept saying to me "I can't believe you just TOOK that, like you didn't cry or anything. You're so TOUGH."

We explored the prehistoric garden and then we got lost and it seemed every trail we tried ended in a locked metal gate. There was a time in my life when it would have been magical to get lost in a beautiful garden, but today it was ninety five degrees and the clock was ticking on everyone's good attitudes and there was still a massive hill between me and the car. After the second locked gate the kids needed a rest. 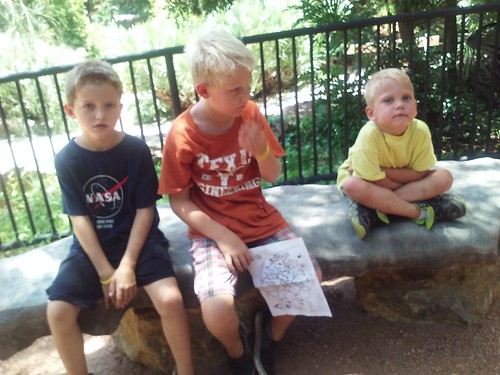 Finally we followed a camp group back through the prehistoric garden and found a familiar landmark, but it STILL took us forever to walk back up the giant hill.

I estimate that by the time we got back to the car we had about thirty seconds remaining before Mount Wes-more would have exploded and I would have been carrying TWO kids up the hill. We went home for the third screening of Ghostbusters this week and I took a very long shower. And then we played outside with friends until a critical mass of kids was screaming and then VOILA! Bedtime!!
Posted by Becca at 9:24 PM

Loved the update. The gardens sounded so lovely! But that walk up that hill...yea sounded exhausting.