On our first day in New York, while we were walking to our brewpub late lunch, I spotted the restaurant from Seinfeld across the street. After some Googling confirmed that it was THE ACTUAL PLACE, we decided to have breakfast there on the third day of our trip. It was only three blocks from the apartment but the kids were extra silly that day and also they hadn't eaten so it took us a while to get there, but it was all of our favorite meal of the trip. 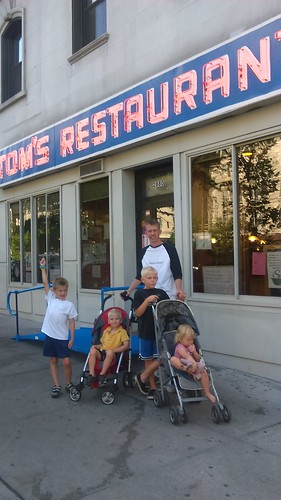 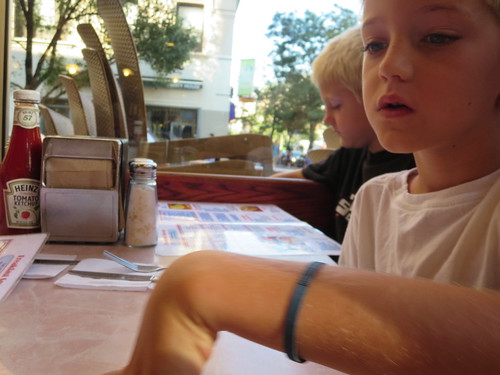 Two nights of limited sleep meant the restaurant manners were kind of a problem. Charley couldn't stop loud-talking about how much he was enjoying his French toast and James started his meal by picking up his whole short stack and eating it like a hamburger with syrup dripping off all the sides. Meanwhile Wes was using a knife to eat butter directly from the packet and Mary was lying on her back with her bare feet up against a window. Everyone complained loudly that there were no free refills on orange juice. Ryan and I kept our blinders on and drank as much coffee as possible then left a very generous tip.

Ryan was hoping we'd empty the whole thing of syrup, which is hilarious because at home he is the Syrup Police. When Wes, who had already put a healthy amount on his pancakes, complained that he couldn't "see his syrup anymore" Ryan piped up, "Well let's get you some more, Buddy!" It started out full, so we put a pretty good dent in it. 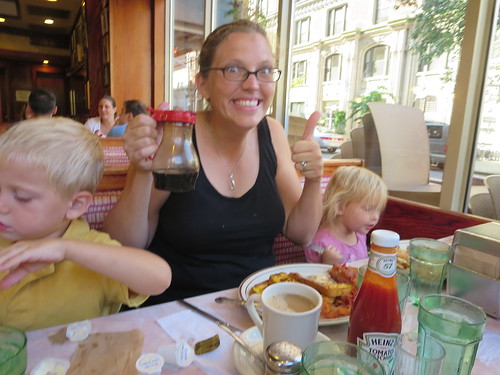 Beyond being the Seinfeld restaurant, Tom's was a GREAT place. It's been open for SEVENTY YEARS. The food was great and reasonably priced and our waitress, though intimidating at first with her authoritative bearing, was INCREDIBLY NICE AND PATIENT with the kids (although after I ordered the third kid an orange juice she stopped me and said sternly in a Greek accent "Is OK. Everybody get juice.").

Afterward we were crossing the street when I looked up the street and noticed this massive Gothic cathedral a few blocks away and decided to go see it. 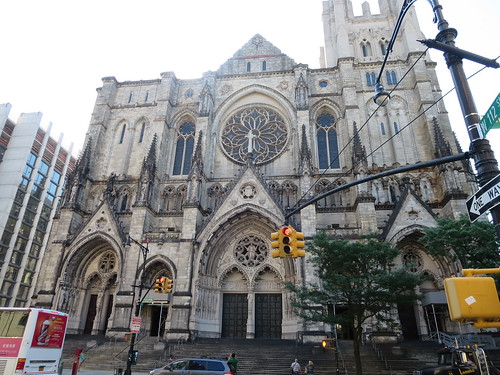 On the way from the awesome, cozy diner breakfast to the gorgeous Gothic cathedral we stopped into a bookstore to browse and I realized that NEW YORK IS MY DISNEYWORLD. Also, this is my book-browsing face. 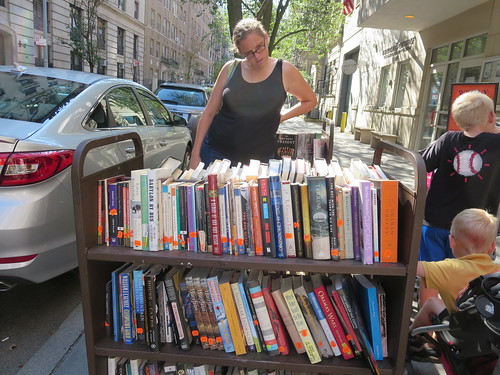 Ryan likes to take pictures of us walking down the street. 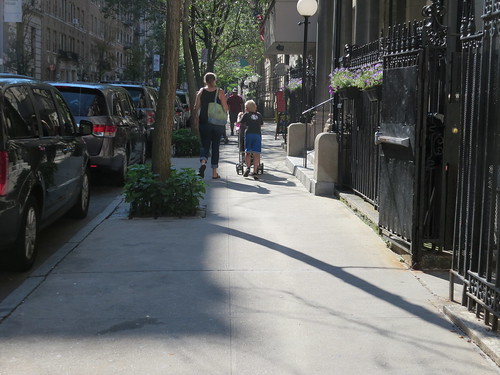 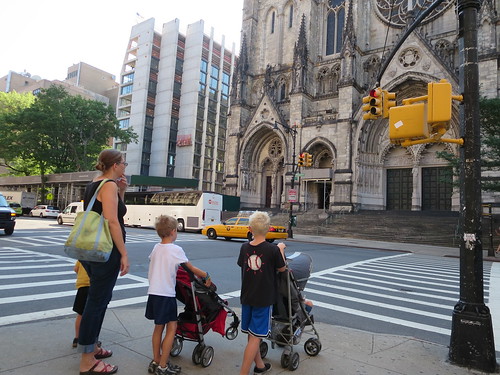 We all spent a lot of time just looking UP in the cathedral. It was incredible. 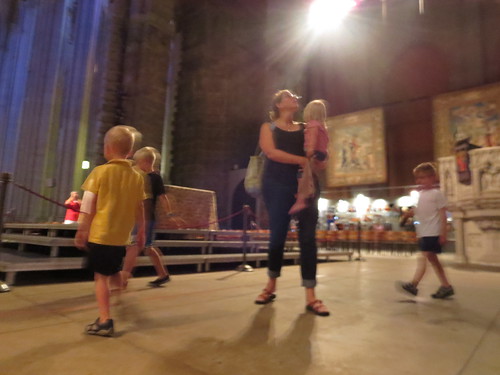 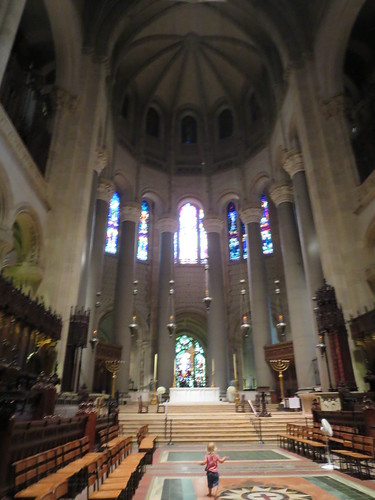 We looked at a great photography exhibit of the Dali Lama and a moving video art installation related to Occupy Wall Street and other global populist movements. Charley and I spent a long time reading and thinking about a quotation inscribed on the tomb of an old bishop of the church before Charley shifted back into eight-year-old mode and said "Wait. Is there a DEAD BODY in there?! Coooooooool" and the moment passed. This visit was one of my favorite parts of the trip. I could have stayed longer, but Mary had other plans. And you know what? When your kid has a freak out in the chancel area it is a long, LONG way to the back door. A long ECHOEY way. 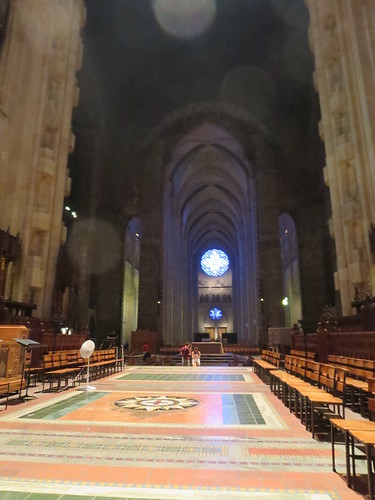 We got out the back door just in time for James to announce that he needed to potty. Ryan took him back in and the rest of us got to read on the steps for a while.

The plan for the rest of the day was to go see the Highline, the elevated park built on an old train platform that snakes its way down the west side of the city. We couldn't find a close subway stop, which meant lots of walking, but we did find a grocery store halfway there and spent about thirty minutes looking for picnic items and enjoying the air conditioning. After that we found the Highline, but Ryan wanted to find an entrance with an elevator and after walking five blocks to the closest elevator entrance we found it was out of order and we had to carry the strollers up the stairs anyway. I was not a happy camper. But the park itself is really neat. It snakes its way between buildings on either side and has beautiful wildflowers planted everywhere.

We were thirsty thirsty friends. 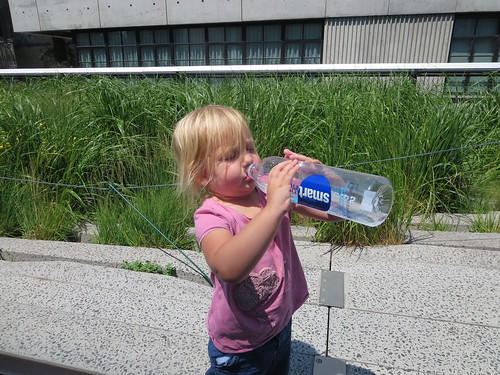 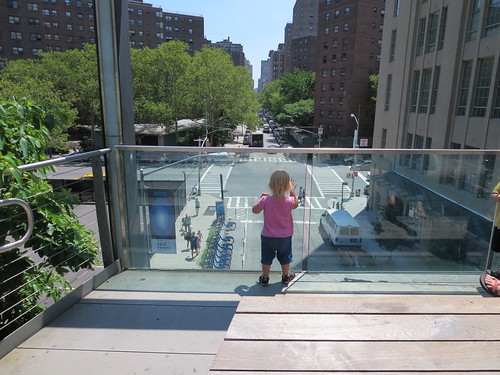 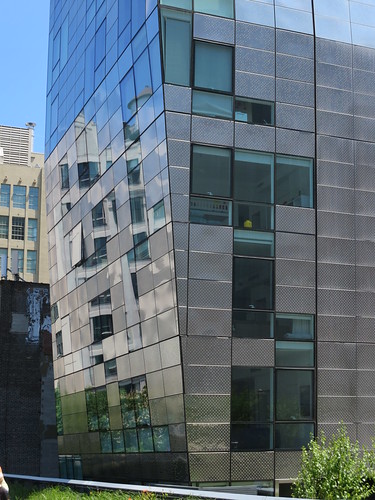 We had our picnic on a bench in the shade and were just about to go back down the elevator (we found one) when we happened upon a public Lego project. The kids added to the Lego city for nearly an hour. 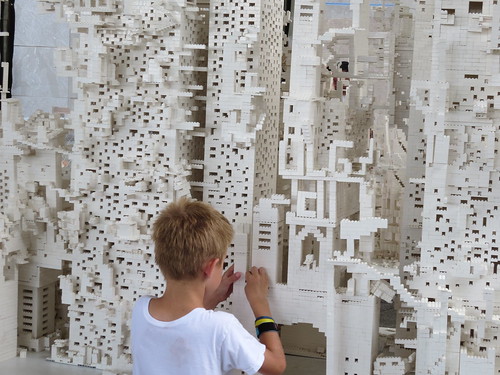 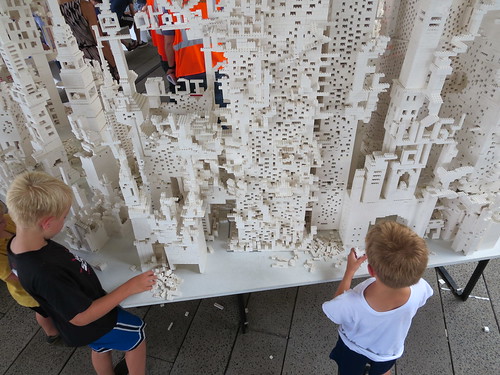 The Lego project really saved the day for me. The park is amazing and the scenery is really beautiful, but it was just SO FREAKING HOT. Luckily on the walk back to the subway we found these crazy air vents that were shooting freezing air-conditioned air out onto the sidewalk. They stayed like this for a very long time. Honestly it was really hard to tear ourselves away. 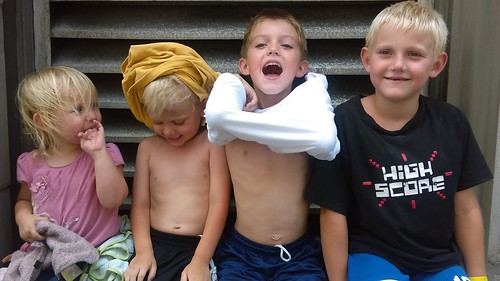 Next we headed to Brooklyn to a pizza restaurant a friend recommended and a public art exhibit/fountain/splashpad a different friend recommended. The kids were SQUIRRELY by this point, but somehow we managed to get everyone from the subway to the restaurant where a caricature of an old world Italian New York restaurant owner came outside, saw us, and exclaimed (in front of a line full of people waiting for a table) "I want to get zee kids out of zee heat. Yous come in and sit down." We bucked the entire line. The menu was really just a list of toppings and lots of declarations of "We only take cash!!!" and, sadly, "Liquor License Pending". We ordered a cheese for the kids and a basil and tomato for us and they brought us a pitcher of water and things were starting to get better but still, honestly, the kids were kind of TERRIBLE at this place. BUT AT LEAST THE FOOD WAS GOOD! 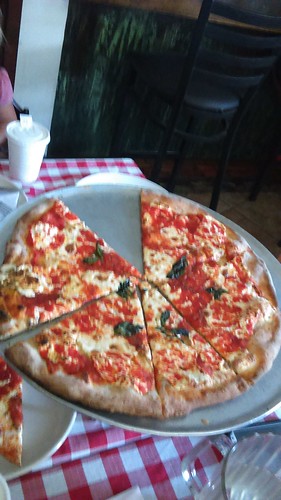 Ryan asked for the check and the waiter showed us a secret back door so we could GTF out of there and stop 1)trying to play with the ATM, 2)spill things, and 3)pick on Mary until she screams anymore, at least not in the restaurant. Two hot trudgy blocks later we were finally at Brooklyn Bridge Park where three of the kids enjoyed playing in the fountain and one kid had a huge freakout over something insignificant that he probably doesn't remember. The view from the park was awesome. 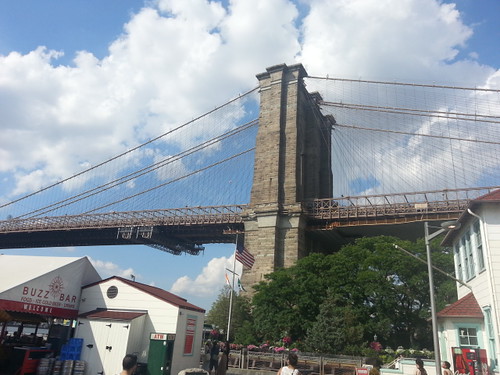 Fortunately, the park was right next to the landing for the water taxi, so we didn't have to walk back up Hot Death Hill to the subway stop. Wes called the water taxi the "Daredevil Boat" because it was FLYING. It literally had us across the Hudson in three minutes, barely long enough for us to scramble up to the top deck to see the view. It was taking the corners so fast James was almost thrown across the deck. Then it took us so long to get back down to the bottom that we had to fight through a throng of commuters to get back up the dock. (Wes's shirt was so wet and muddy after the splash pad he wouldn't put it back on.) 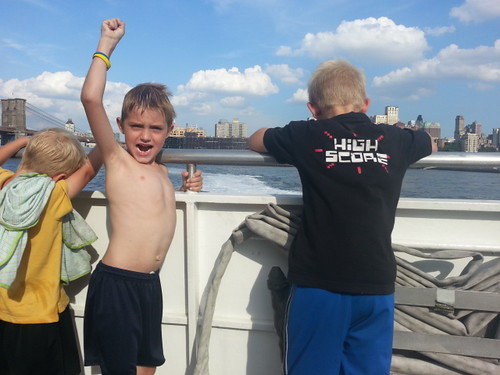 I thought we were going to go back to the apartment, but we decided at the last minute to go to the World Trade Center memorial because we figured we'd regret not going later, so that is how I found myself explaining September 11th to Charley and Wes in the back of a cab while Mary SCREAMED FOR HER LIFE. Me: Some bad men took an airplane and flew it into a building and the building fell down and many people died. Mary: AAAAAAAGHHH DOWN DOWN DOWN DOWN NO NO NO NO NO NO FDAFDFEWFS!!!!!!! Me (dodging toddler headbutt): It was very, very sad and they built this memorial to honor the people who died. James: Is anyone going to fly an airplane into our house and kill me? Me: No, Buddy, this kind of thing hardly ever happens, it's not something you have to worry about. Mary: NONO NO NO NO NO DOWN AAAAGGHHHHH NO NO NO NO NO DOWN!!!!!!. Ryan, who was in the front seat, on the other side of a soundproof partition, was quite surprised to see my frazzled expression when he turned around to look at us at a red light.

I was glad we went, though. It is quite a moving memorial. 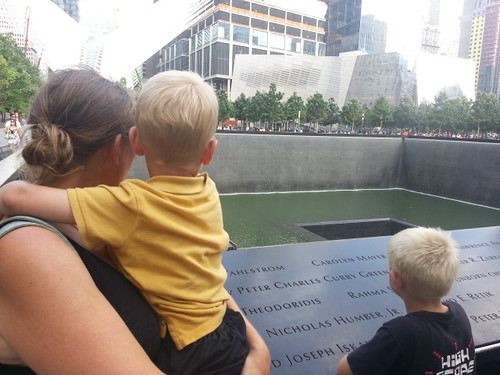 We subwayed back uptown (the closest subway stop had no emergency exit/stroller door so Ryan picked up the entire stroller, with Mary inside, and carried it over his head through the turnstyle, we were DONE WITH THE CITY for that day), put the kids to bed immediately, and watched Breaking Bad while eating canollis and drinking beer, which was a really delightful way to spend the evening.

Coming up next is Central Park and the Very, VERY LONG train ride.
Posted by Becca at 11:49 AM

I am LOVING your vacation and taking notes. I love those moments of agreed-upon doneness, where everyone works together to get through.

Did you go to the pizza place just under the Brooklyn Bridge? We went there a few times when we lived in NJ. When we went to the city over Memorial Day, we hit up Hells Kitchen for eating -- so many choices that picky eating didn't slow us down!

Next time you're in the city, check out the Intrepid/Enterprise museum! The kids *loved* the aircraft carrier and submarine. I loved the space shuttle and airplanes. Many of the docents are retired servicemen and they knew a ton about the airplanes.