I may have mentioned that we are doing a bit of work in the kitchen, yes? Well I have good news, you're not going to have to keep hearing about it because WE HAVE COUNTERS. Counters were the final step in the "If You Give a Mouse a Cookie: Home Improvement Edition" and they came on MONDAY. HAH. LEH. U. JAH.

Here's how the story goes, if you are not familiar with it.

If you want to put six people around your table, you have to eat in the dining room.
If you want to eat in the dining room, you have to rip up the carpet.
If you want to rip up the carpet, you will need stained concrete in your entire downstairs.
If you want stained concrete in the entire downstairs you will have to completely move out of the downstairs for an entire week while they install them.
After they install the floors you will still need somewhere to sit in the kitchen, so you will build a peninsula and breakfast bar from stock cabinetry at Lowes.
Finding a stain to match your new oak cabinets to your aging builder-grade maple cabinets will make you want to kill someone. Like the someone who buys a new can of stain every day until he finds exaaaactly the right one. This behavior is infuriating but ultimately you will be so happy with the result that you will stop threatening to move out.
Once you build the peninsula you will need a counter, so you will drag your feet and ultimately order one, wait a week for them to come measure, then wait four weeks for it to be manufactured, then wait another week for it to be installed.
In the meantime you will use a sheet of plywood as a counter, which is extremely practical except for the splinters and the fact that it's basically impossible to clean.

Monday was the long anticipated delivery day of The Counters and signified the practical end of Kitchenpocolypse 2015. Incidentally, the reason we undertook this project was simply to create enough space in our kitchen that we could FUNCTION as a family of six. The alternative was moving to a bigger house with a kitchen that didn't fill me with rage every minute of the day.

Before our little renovation, we had what I refer to as the camper counter, approximately four square feet of useable space between the stove and sink. There was no place to line up the plates to divvy up the food and no space to prep multiple things at once. I was constantly knocking over my wine glass while attempting to shred cheese and roll enchiladas and whatnot. I've been dealing with this for a long time and, well, enough is enough, the kids aren't getting any smaller. We augmented the camper counter with a counter height table from Ikea that we bought at an estate sale. This worked OK, except it was WICKED SUPER CROWDED between the Ikea table, the two stools that went under it, the kitchen table, the bench, and the four chairs. That is a lot of furniture in one kitchen. AND we couldn't extend the table with the leaf because there was no room so the kids were constantly all up in eachother's space while they were eating, which you can imagine led to some friction.

ALSO ALSO ALSO the downstairs bathroom is in the corner of the kitchen RIGHT NEXT TO THE TABLE, which is why you don't let high school interns design floor plans. The moment we decided to redo the kitchen happened during dinner one night when one kid got up from the table, TOOK A MASSIVE DUMP IN THE BATHROOM WITHOUT EVEN CLOSING THE DOOR OR INTERRUPTING THE CONVERSATION HE AND I WERE HAVING, then returned to the table. That's the moment Ryan and I looked at each other and said "I think we can scare up some extra cash so THAT never happens again."

Another interesting fact about the bathroom situation is that when I hosted girls' night, everyone always left way before normal and I think it's because THEY HAD TO PEE AND DIDN'T WANT TO DO IT RIGHT NEXT TO THE TABLE. I hosted two weeks ago at the new improved kitchen table in the dining room and the last friend left at 11:00. BOOM.

So Monday morning, after staying up until one o'clock in the morning prepping everything, this is what we were working with. The kids ate breakfast at the coffee table. 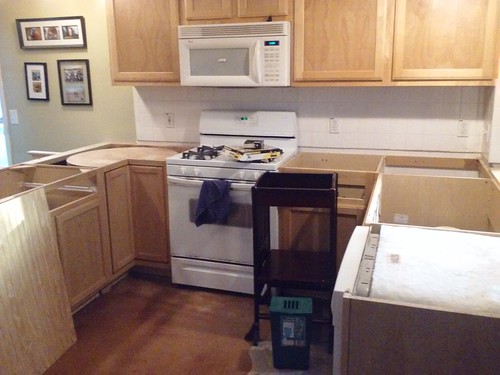 The workers came right on time and went to work, while I kept a hoard of curious onlookers out of the way. They were done in a couple of hours and TA DA!!! MILES AND MILES OF COUNTERS. 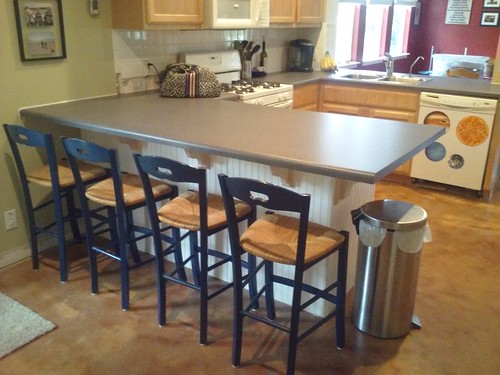 We still ate lunch out because watching someone else work on my house was exhausting and also we still didn't have a sink. 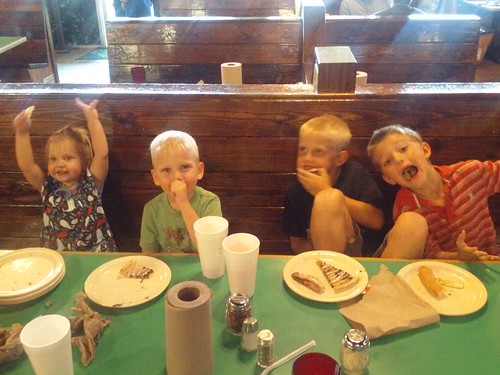 By dinnertime, the peninsula had already seen tons of use. Charley and his buddies came in for water and sat down there (although later there were so many kids in my kitchen I waved a box of popsicles at them and they all scattered into the back yard). Friends came over and sat there to talk while I made dinner. It's like it needed to be there all along! 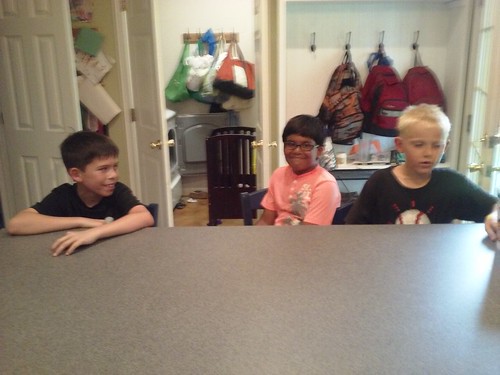 They were taking a break from hauling EIGHT BAGS of yard waste several hundred yards from my neighbor's house to use in the compost bin. 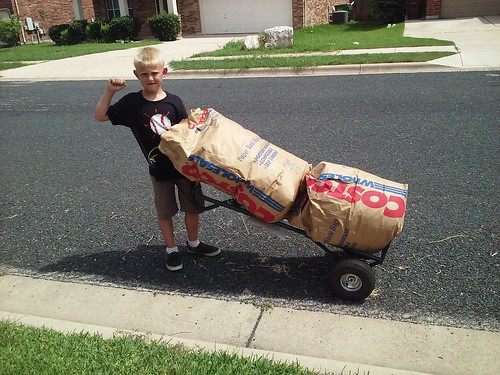 After bedtime Ryan reinstalled our old sink and this new tall faucet he surprised me with. I helped him by making many, MANY caulk jokes. SOOO many caulk jokes. 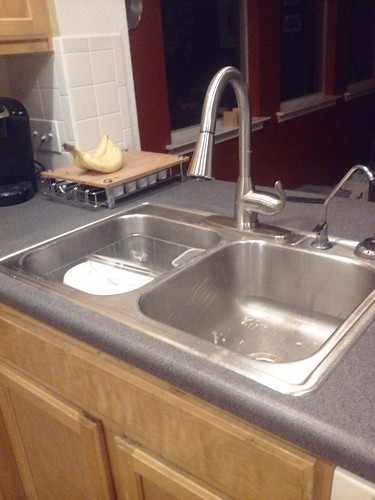 But OH YOU GUYS. It's been less than forty eight hours and I am completely in love with my kitchen. When you bring groceries home there is a place to put them down! I made cookies tonight and had a spot for the cooling racks! I made the cookies at the same time I made dinner and NOTHING FELL OVER OR CAUGHT ON FIRE! It takes ten seconds to sweep all of the kids' breakfast dishes into the sink! There is enough room for everyone in the family to walk around in the kitchen and get to the bathroom and the fridge and the back door and the garage door and the pantry without clobbering someone else. This needed to happen. As they say, "If Momma ain't happy, ain't nobody happy." And if Momma is constantly stubbing her toe on wayward chairs, tripping over children, and eating dinner to the sounds of a child farting four feet away from the table, MOMMA AIN'T HAPPY. Yay for home improvement. And for Ryan for trusting my vision and experience as primary kitchen user and doing much of the work including finding the right stain, installing the sink and faucet, building the frame for the peninsula, and hanging the beadboard. 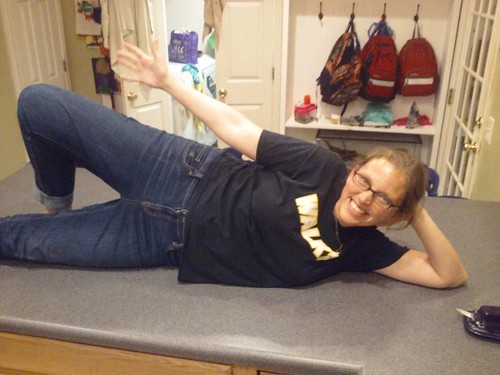 I have major kitchen envy! The mid-dinner dump is pretty convenient though. In my house that would have been my husband because we're Klassy

That looks so great! I love the four chairs all lined up. Between your new kitchen and your DIY-mudroom entry way cabinet, you're ready for a magazine shoot. Looks so great.

So happy for you and hating you just a little bit. Imagine, if you will, a counter made of cream 6" x 6" tile with white grout. AHHHHHH!

Your new counter top looks great, Becca! It's simple yet elegant to look at. It also looks very clean because it doesn't have so much details and designs on it. It totally made your whole kitchen look good as new. :-)