In which we can actually leave the house after 4:00

So Thursday afternoon the kids and Miss N and I had a birthday party to attend at a neighborhood pool (Thursday afternoon is my new favorite birthday party time, by the way). Ryan told me "Stay as long as you want, I'm going to get some work done and could use the extra time" so we hung out until about seven o'clock before languidly walking back to the car and heading home. I texted Ryan that we were on our way and asked "What are you up to?" and he responded "Just hanging out here" which wasn't actually the entire story because when we got home THIS WAS IN THE DRIVEWAY. 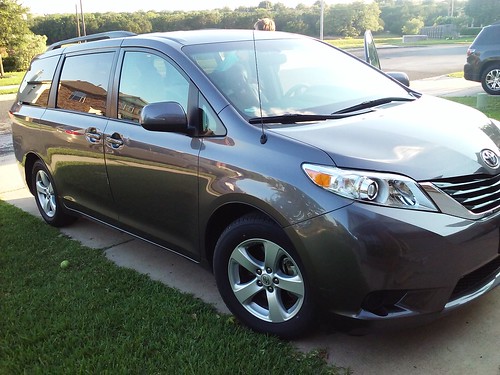 We had looked at it last week and decided to buy it, but (I thought) were in the midst of a loooooong drawn out series of negotiations with the seller about inspections and tires and whatnot. Ryan seeeeecretly bought it over his lunch hour and somehow managed to keep it a secret allll the way until we came home that night. He is CRAFTY.

The kids were over the moon about the automatic doors, because now the safety patrol won't just stare at the open door, dumbfounded, at school pickup, and I won't have to drive to the end of the parking lot with the door open, put the car in park, close the door myself, and then drive away. KEEPING UP WITH THE JONES FTW!

Ryan is going to drive the other van by the way. We are a two van family aka twice as cool. Also, now that they keep giving me a full-time teaching load this is going to make things SO MUCH EASIER.

The first thing we did in it the next day was go get donuts for National Donut Day. I gave the kids five bucks and sent them into the donut place and Wes came out with this monstrosity. I admire his commitment to culinary creativity. It truly is something to behold. This morning he had a bagel with cream cheese and peanut butter. Yummo! 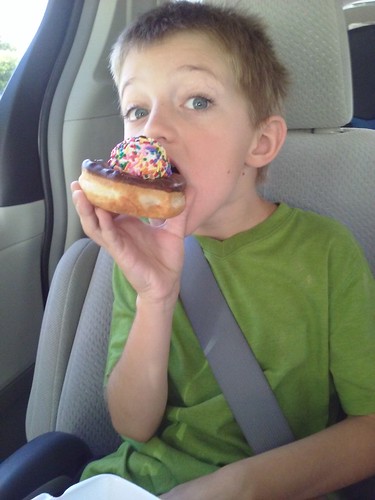 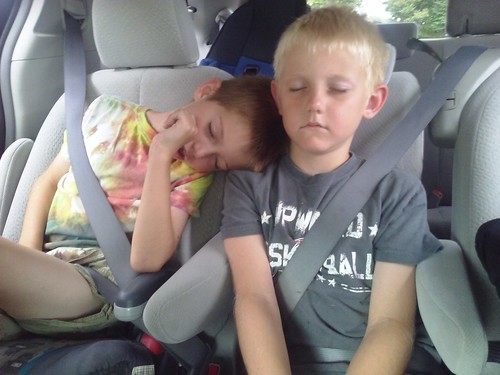 Saturday we had soccer for Wes. Mary has taken to carrying around a baby of some kind at all times. Also she was wearing the black Batman crocs all the kids including Charley have worn. She is positively EDIBLE you guys. I dare you to let her walk past you without scooping her up and kissing her tummy. It's impossible. #science Not into hair accessories, but stinking cute. 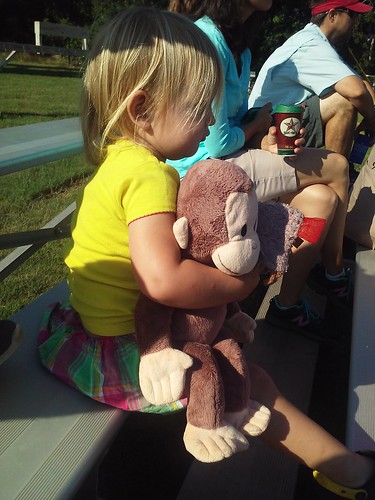 Saturday night Miss N was playing in a city orchestra concert at an outdoor amphitheater. It was Pops music and outside and I decided early in the day that we just HAD TO GO even though it started at eight o'clock and was downtown and I was fairly certain the kids would turn into horribly behaved pumpkins the moment we left the driveway. We let everyone nap in the afternoon, packed up a picnic (with adult beverages in shatterproof containers), and headed down there three hours early because I cannot STAND being stressed about time and parking. We drove right up to the edge of the venue and found a great parking spot, laid out our blanket, and ate while the kids ran around the woods and climbed on the rocks, perfectly content until the concert started. WHO ARE WE??

We sat with our friend Miss M, which made Mary deliriously happy. 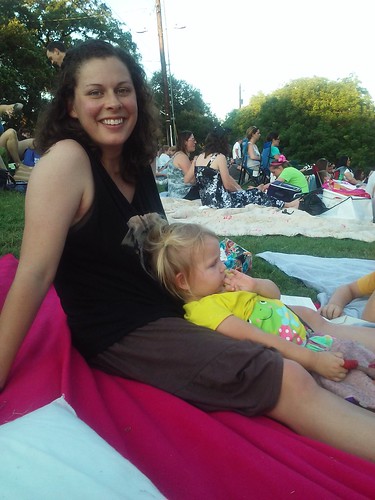 And the kids were totally enthralled with the concert, which was excellent. Charley was CONDUCTING by the end of the concert. James kept asking me when "the show was going to start" and I finally had to explain to him that the instruments were the "show". 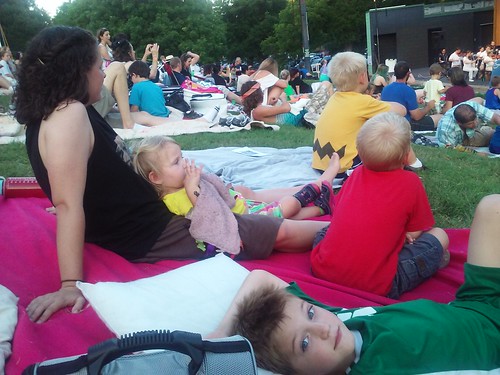 Afterward we drove home with minimal fighting and put everyone directly in bed covered in bug spray and sunscreen where they fell asleep immediately. SO WEIRD AND HAPPY AND EASY YOU GUYS.

The bottom didn't really fall out until we tried to invite the neighbor kids over for banana splits after dinner on Sunday and my kids were so exhausted and goofy they could barely function and I had to shut it down early. And then James sneaked out after bedtime and used half a new bottle of baby shampoo to make "soup" in the sink, so that wasn't awesome. We are having friends over this afternoon which will be really fun but also made me look around at the house today and it is going to need some work. Or maybe a flamethrower. I'm going to handle it by going to the Y for a couple of hours and pretending it's not a problem.
Posted by Becca at 6:36 AM

I so very much wish that TX and CA were closer together (I know, touching, but you know what I mean.) I think we'd have an awesome adult-beverage-in-shatterproof-container summer! Also, SO COOL on the new surprise van!

Yay surprise an-- so cool!