I spent last week at science camp a professional development centered around using ocean sediment cores to learn more about the history of the Earth's climate. I have been SO EXCITED about this ever since I found out I got in earlier this year. Climate proxies are one of the weakest parts of my earth science and climate classes but the students always have SO MANY QUESTIONS. Plus, the week promised lots of hands on experience, including a field trip. Also, there almost certainly promised to be box lunches, which is basically why I chose a career in academic science.

The first thing we did was take a walk through the forty-degree refrigerator where all the cores are stored and also where I wish I had been working during my pregnancies. I couldn't resist making someone take my picture with millions of years of earth's history because it was really awesome. And cold. 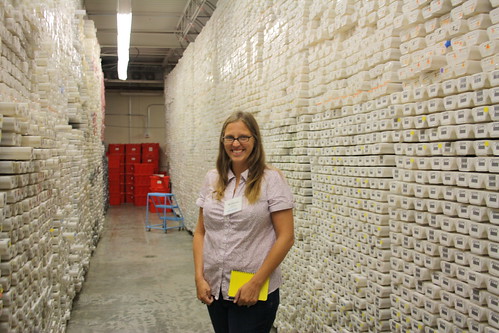 Some of these cores had sediment in them that goes back MILLIONS of years. MILLIONS. We saw a model of a core that showed what was happening on the floor of the Gulf of Mexico when the dinosaurs went extinct (This is called the K-T Boundary). We worked through data that suggested there was a pattern of droughts associated with the abandonment of Mayan cities on the Yucatan Peninsula. We looked at everything in between, alternating between looking at the sections of cores, looking at slides with a microscope to identify tiny organisms or grains of sand or pieces of volcanic ash, and putting all that together to figure out what might have been going on. We pored over time histories of oxygen isotope ratios to identify trends. Data, you guys. DATA. I have so missed data.

See those big rock chunks embedded in stripes of sand and gravel? Glaciers. Glaciers did that. In Antarctica. 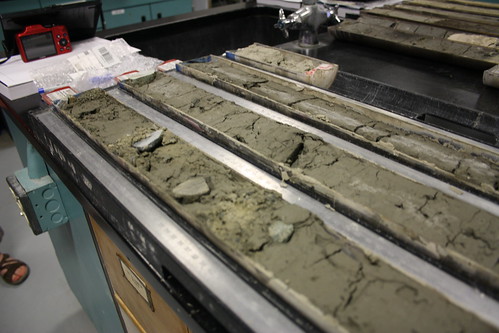 (While I was gone the big kids stayed with my parents, not because Ryan can't handle all the kids himself (he can!) but because their camp was closer to their house. James and Mary enjoyed five days of normal family size time with Ryan, which I think they found unsettling. Apparently when Charley and Wes came home for a mid-week visit there was much hugging and celebration)

Wednesday we went on a field trip to an outcrop, which is a place where layers of rock are exposed to view. You see a lot of them along highways and riverbeds and next to malls if they have to dig out the parking lot. This outcrop was situated below a large dam, which really added to the sense of excitement since we had just had a conversation about how earthen dams were prone to rupture and had just noted that the lake behind the dam was well over its banks. I cast a nervous eye over my shoulder at the dam every few minutes and generally maintained a state of mental readiness should I need to scramble up the outcrop to the safety of a parking lot if the dam started to give way (it didn't). 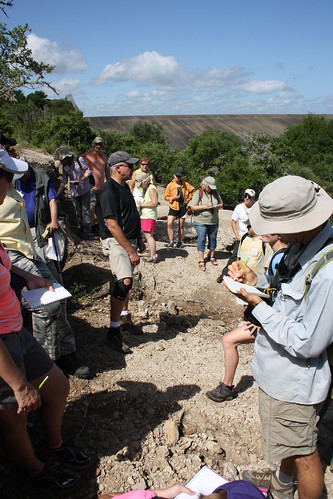 Group at top of outcrop. Death dam visible in background.

I don't know if I mentioned this but Texas is really pretty and green right now. Far cry from summer 2011 when Ryan worked in this particular town a handful of times and when we drove out there through mile after mile of tinder-dry countryside there were signs in every town asking people to pray for rain. Climate variability FTW! 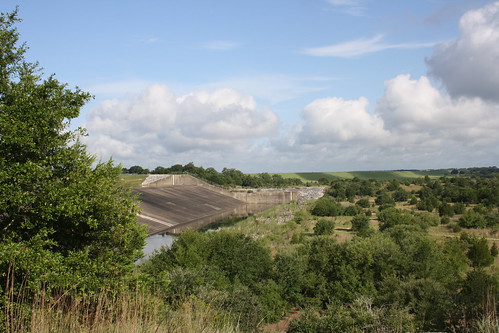 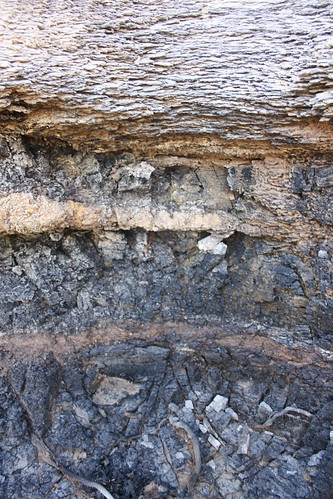 Ultimately, by looking at the outcrop, we could tell that this part of the state had been alternately adjacent to the ocean and underwater. There was also some volcanic ash. I learned so much. Also, in addition to clouds, I will now be craning my neck to see rock outcrops while careening down the highway at seventy miles per hour. Seems safe.

The black chunks at the bottom of this core were heated by MAGMA. 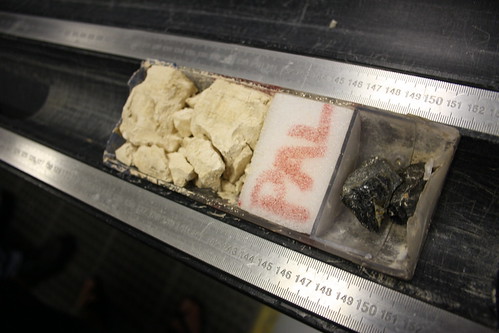 It's hard to believe how much we learned in one week--exhausting, but incredibly gratifying. It will be fun to teach proxies in my earth science class this fall.

It was really exciting, too, to go home and get swarmed by all the kids and Ryan. After the normal fussing at the kids to get dressed and get in the car so we could all go to the Y, Charley sighed from the back seat and said to me "It's good to have you back!" James and Wes climb into bed with me before we get up for the day. And Mary still follows me around asking me to pick her up (which I can't do until the 18th). Good to get away for a bit and great to come home, the perfect trip.

Now Ryan is demoing the kitchen counter in preparation for the new counter which is coming tomorrow morning and after that all that is left of Kitchenpocolypse 2015 is putting the sink back in and installing the new faucet. SO CLOSE YOU CAN TASTE IT. Also we are never doing a home improvement project ever again.
Posted by Becca at 8:57 PM

So fun to learn stuff!! I didn't understand most of it beyond MAGMA but it looks awesome!

I would love to take your class. Your enthusiasm is contagious!

Great article. Thank you for share this type of article.