I took the summer off and I'm exhausted

Good grief it's been too long, my friends! Summer is kicking my butt and with mostly non-napping children I don't have the leisurely keyboard time I once did. So to catch everyone up, let's take a stroll through the SD card on my phone, shall we?

Let's start with Memorial Day weekend, the traditional start of summer, or in the case of Central Texas this year, the continuation of a wacky rainy, cold May filled with tornado warnings, frequent torrential downpours, and deadly flash flooding. Who wants a hot dog? The weekend was actually pretty delightful, with a brief break from our usual weekend commitments of soccer and birthday parties. Saturday we all went to the Y for some working out and childcare, then we had a nice brunch at a new favorite place. The kids were delightful and the sangria was cold. Winning! After that we went on our first of three visits that day to Home Depot for house project supplies. After we got home the little kids went to bed and Ryan started adding pendant lights and one more recessed light to our kitchen. There was a lot of this. 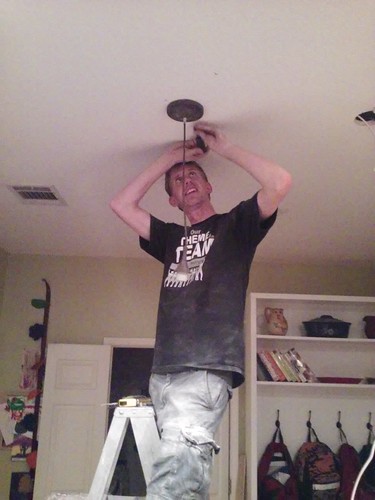 But ultimately, after two more trips to Home Depot for junction boxes and OOPS one more junction box, the finished product was so beautiful I sometimes just stand in the kitchen to admire it. 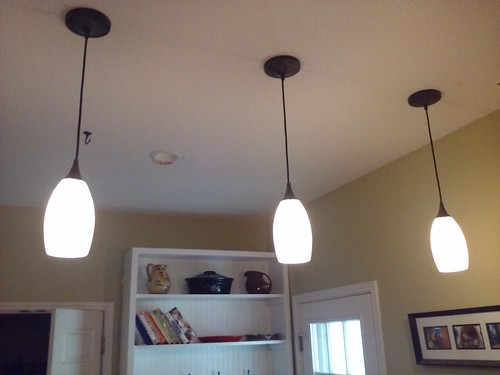 The kitchen is COMING TOGETHER. Even though I am using a large piece of plywood as a counter on one side, I can see how awesome it is going to be and I AM SO EXCITED. The counter guy came to measure today. Progress.

Sunday we went to the annual family reunion (Ryan's side) pool party a couple of hours away. We had a lovely time, but there are no pictures because: four kids in the pool. One thing I wish I'd taken a picture of was the slushy machine. Imagine fourteen kids lounging around a pool drinking slushies out of margarita glasses. Hilarious. Also Mary busied herself finding every single unattended slushy along the side of the pool and finishing it off. She had a lot of slushies. So did whoever hurled all over the upstairs bathroom the next morning. Turns out kids can get hangovers from sugar and Red No. 40. There was also a margarita machine, which was helpfully placed in a different part of the porch than the slushy machine, which prevented Wes from reprising last year's performance of "I didn't know the red juice was actually rum punch." It was great to see everyone and we had tons of fun.

Monday we were invited to a friend's house for a cookout. We were delighted that the 70% chance of rain managed to hold off long enough to grill some kabobs, but soon after dinner the sky got unimaginably dark and it started to POUR. Scary, can't see the other side of the street rain that lasted for hours. We brought all the kids inside and put on a movie while the grownups sat at the kitchen table playing cards. Everything was all soft and happy until the first tornado warning came in. I stared at the radar between turns, watching the storm get closer, closer, closer. It didn't look awesome on radar, but still a second tornado warning came across all of our phones. We all headed upstairs to peek out the window but all we could see was rain. Finally, when the third tornado warning was issued just seconds after the storm approaching us developed a weak hook echo (which indicates strong rotation) we all jumped up and ran to the living room to get the kids. "WHO WANTS TO GO IN THE FORT?!" we asked with feigned cheer. All the kids cheerfully got up and trooped into the stairs closet. 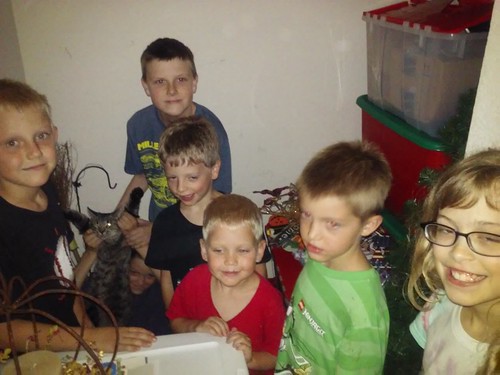 LOTS of friends were posting similar pictures of their Memorial Day party all sitting together in bathrooms and closets. Some with their swimsuits still on and drinks still in hand. It was surreal. Mary didn't even wake up. 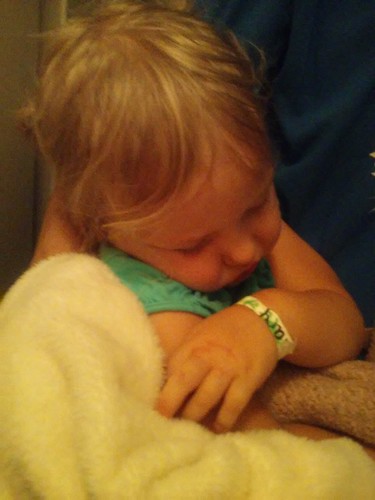 When the storm was past us we went back to playing cards for a couple of hours and then Ryan and I took the kiddies on a flood tour of our neighborhood. We drove down the main road that goes next to the river to watch what is normally a quiet little creek that kids wade in that had turned into a raging river that came within inches of overtopping the bridge that crosses over it. We drove parallel to it for a little bit before coming to a point where the water was rushing along directly beside the pavement and then we got the heck out of there. 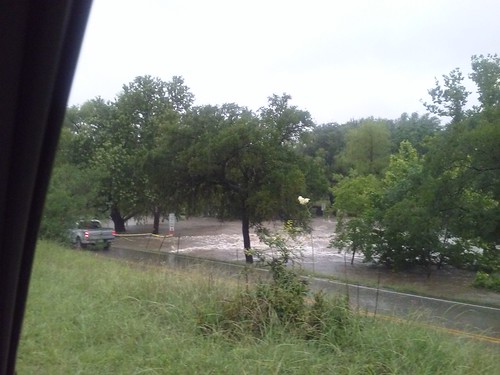 The firemen at the firehouse (they must have called everyone in because the parking lot was completely full) were standing at the ready next to the trucks, bay doors open and lights already on, and there was a barrier in the middle of the road (different road than the one in the picture) warning people not to drive through if it was flooded (it was not when we went through, but there was a thin layer of water running across the street). Shortly after we got back home they closed the road we'd just driven down. Before bed we all watched on the news as a team of rescuers drove a boat across what is normally a busy city street to rescue a man clinging to a telephone pole in the middle of the city. Scary stuff but it reminded me of my hurricane field research days. Minus all the junk food and sleeping in trucks (also it was much scarier Saturday night when another river in the area rose from seven to more than forty feet in a matter of hours and destroyed dozens of homes and killed several people. Awful.)

Tuesday some neighborhood friends came over for some ill-advised playing in the retention pond across the street. I sat nearby ready to charge into the nasty street-runoff water in case anyone fell in. It was about twelve inches deep in this picture, but during the height of the storm on Monday it had come out of its banks and reached the foundation of the house to the left. The greenbelt you can see behind the pond was almost continuous water all the way across. Truly unimaginable amounts of rain. 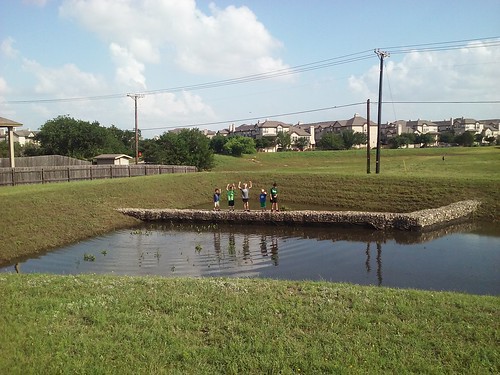 The rest of the week was spent putting in the garden Charley has been planning for over a month (he falls asleep reading "Square Foot Gardening" every night).

Bought some compost (to add to our compost, which Charley has been lovingly watering and turning. He even cuts open the k-cups and empties the coffee grounds into it, so YAY those things are incrementally less horrible for the environment!). 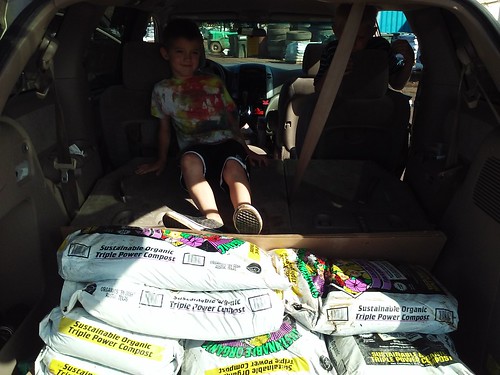 Then we bought some plants. I really was set on growing tomatoes, but since we are so late to the garden party (har) the nursery didn't have any tomato plants left. I remembered seeing some at the grocery store, so we went there next. They told us they didn't have any more tomato plants either, so we looked around a little bit and managed to find this giant bush of a tomato plant in the back. It even had three full-sized tomatoes already growing on it! This felt a little like cheating, but this is Texas and soon the weather will be kind of an asshole, so if we want tomatoes, we need all the head start we can get. 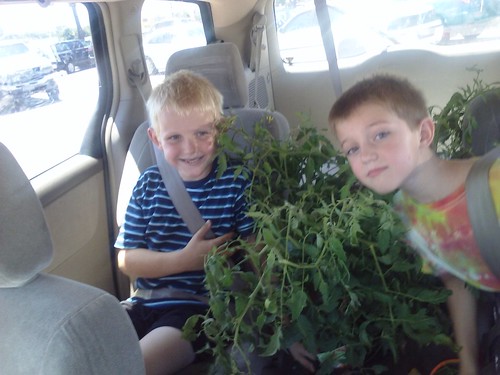 The kids call it Mega'mato. Now that they have anthropomorphized it I am terrified it will die. I have never transplanted such a huge plant before and I'm giving it a 50-50 shot. Still, to avoid disappointing the kids I water it and sing to it twice a day. So far so good.

We planted a bunch of seeds in this garden. Six squares of beans, four squares of sunflowers, two squares of carrots, and three squares of eggplant (I'm going to be making a TON of ratatoullie if this thing pans out). James and Mary also helpfully threw several handfuls of mixed seeds into the dirt, so we'll see how that goes! 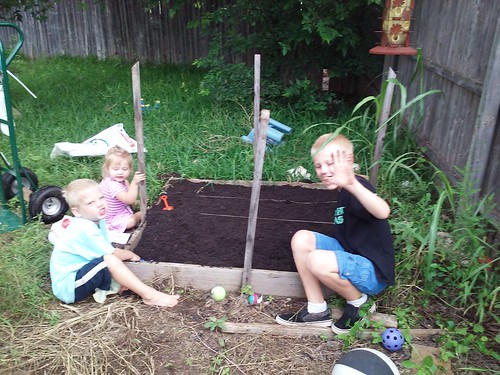 Other interesting tidbits from this week: We saw a possible tornado on our way to dinner Saturday night. There was no warning on it and no damage, but my meteorology friends had mixed opinions about it so I'm not ruling out a tornado. 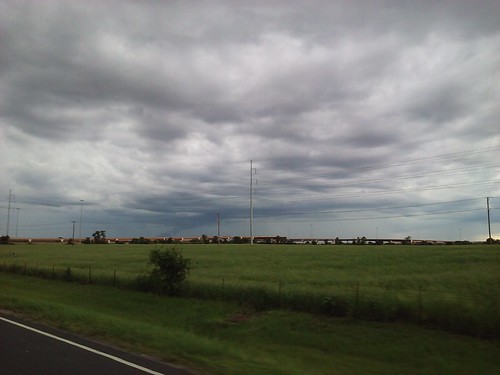 And Mary's teacher gave her a topknot after school the other day and I died from the cute. 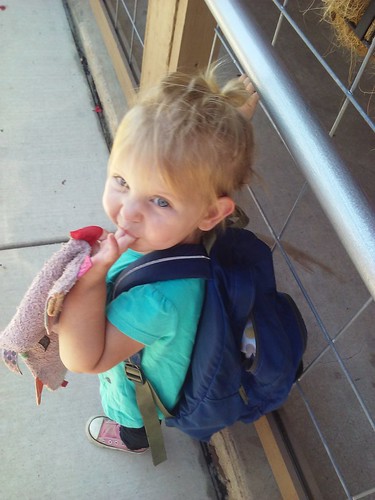 Next we'll talk about my birthday, which was relaxed and lovely. Ryan and I told the kids I was turning twenty-one and it was a really funny joke until this morning Charley said "You had BEER BEFORE YOU TURNED TWENTY-ONE" then looked at me scornfully awaiting my response. I was confused until I remembered we had told him I'd turned twenty-one the day before and then I reassured him that I was actually thirty-five and WELL above the legal drinking age. Sorry, kiddo, you're going to have to bust me for something else.

Also, I took the summer off because ENOUGH ALREADY and I thought the kids needed a real break from structure and routine and MAN I am exhausted at the end of every day. The good kind of exhausted. Also: drinking a lot of Sonic drinks. SUMMER IS THE BEST.
Posted by Becca at 7:24 PM