I hate to brag, you guys, because I'm sure your friends are perfectly lovely, but I have to say that my friends are the best friends in the world. I knew that before #gallbladder2015, but something about major life events, like delivering babies and gallbladders has a way of highlighting how wonderful your support system really is.

For instance, my friend Cindy and I talk three or four times a day, every day, via FB Messenger. Usually this is banal stuff like "School dropoff was especially hellish today. #daydrinking." But when I was in labor with Mary she literally talked me through what I later learned was EIGHT CENTIMETERS OF DILATION that wasn't even that unpleasant, thanks in part to the continuous stream of snark coming from my computer. I told her she should start a web service called "My Snarky Friend" that you could use to get yourself through tough times--early labor, tornado warnings, bail hearings. So on the morning of my surgery, very early in the morning, I sent her a message.

Me: Totally forgot to make a birthplan for the gallbladder.

She didn't miss a beat:

C: Nurses should use soft voices and discretely avert their eyes.

Me: I would like the room to be snuffed with sage prior to delivery and the gallbladder to be ground into a kale smoothie.

C: That I will drink with the other women in my family under the light of a full moon.

I was the only one shaking with silent hysterical laughter in the preop area. Ryan looked scared. It continued like this until I got called back for labwork only to look down at the orders they handed me to see they were for "Cassandra Gonzales". I sure hope they got my name right for the actual surgery. Or that Cassandra also needed her gallbladder out.

Me: "Why is there no Tumblr for post-surgery stomach pictures like there is for post-partum women? Don't I deserve to feel empowered?"

The other thing that has been going on is that between friends and my parents, I have not cooked a meal in over a WEEK. Beautiful food has been streaming into my house all week long. And last night, six friends and two kids came with the food and the ladies sat around my kitchen table while the kids ran around outside and there were tacos and margaritas and wine and cupcakes and cookies. When one friend admitted she had never had cookie butter we busted out the alphabet cookies and passed around the jar.

Lots of raucous laughter and oversharing too.

When it got late, my friend K put Mary to bed. She came downstairs and said apologetically "I rubbed her back and sang some songs but she is still awake" which was probably the most soothing bedtime Mary has ever had EVER. The daughter of another friend helped James change into jammies and read him books (both James and E thought this idea was so exhilarating I am thinking of asking her to move in. Seriously, James sprang out of his chair and was up the stairs before I knew what was happening and yelled down over his shoulder "I WANT TO READ BROWN BEAR BROWN BEAR!!").

I have no idea how many popsicles the kids consumed outside. It was a lot. Three of the boys stripped off their shirts and had a sword fight on top of the picnic table. A toad was proudly shown around the table. Around nine-thirty Wes started crying spontaneously because he was so freaking tired and my friend V carried him upstairs to his bed and gently tucked him in (he was asleep within minutes). 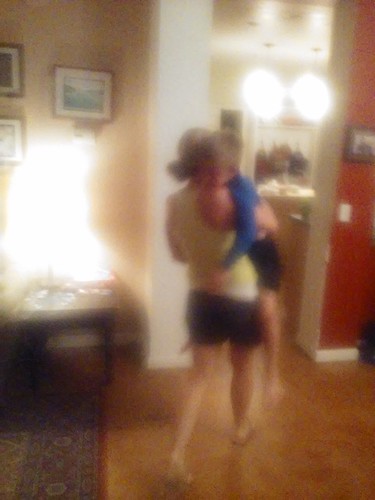 Another friend stayed until the kitchen was sparkling despite my repeated protests. She even scrubbed the burners on my stove while I put Charley to bed and put James back in bed. This was not hard because it was almost ten o'clock and everyone was exhausted. Charley even said "I don't think I can read tonight."

I woke up still smiling this morning but was pretty certain is was going to be horrible after everyone's late night so I lowered my expectations to "Everyone gets to school/camp sometime before lunch with their bathing suit areas covered. But they were surprisingly cooperative (perhaps everyone needed to blow off some steam last night as much as I did?) and was dressed with shoes on by the time my friend arrived to help me with Mary (Yes. One of the friends who was here last night has been coming to my house at seven every morning to help me get Mary ready so I don't blow out an incision hauling her three-year-old size frame out of her crib. You guys!). We got in the car right on time and everyone was at their places before eight thirty. I headed straight to Torchy's.

And all of this doesn't even get into all the OTHER helpers I've had--people coming over to put Mary to bed who also play with the kids out front and admire the garden with Charley! My parents who have helped me do preschool pickup! The friend who had a box of cookies delivered to my front door Monday morning! I am a lucky lucky lady.
Posted by Becca at 8:31 AM

TGFF! (thank God for friends!) Lucky you, and Ryan too!