Gallbladder surgery: because what is summer without guacamole?

So, I don't know if I mentioned it before but I had my gallbladder surgically removed last Thursday. I found out I had the stone a few weeks ago and since I wasn't having any symptoms was going to do the surgery in August when the kids went back to school, but then I went to happy hour with a friend and woke up with the mother of all hangovers the next day despite having had only one beer and part of one drink and learned that it wasn't actually a hangover, it was a gallbladder attack from my dinner, which included chili fries, guacamole, and nachos because I am secretly a twenty-year-old boy.

After spending the entire day and most of the night alternately wondering if and wishing I would die, I went to the doctor in the morning and scheduled the surgery for the first spot available. The surgery was truly the highlight of my summer--the hairnet, the non-skid socks, the big bottle of Norco they sent me home with. Narcotics aren't as psychologically satisfying as enjoying a glass of sangria on the porch with friends, but there's no denying they have enhanced the experience of watching Harry Potter movies in my bed for the last five days. Today I am feeling adventurous and might venture out to Panera to read some of the books I have to read this summer for work.

Obviously, Olympic Race Walking is on hold, which is disappointing because I was getting pretty good at it. Instead I am supposed to walk around the block twice a day. This is going reasonably well except for the small matter of the tropical storm that brought us intermittent rainshowers all day yesterday. Somehow, despite not exercising, I've lost two pounds since the surgery (maybe that's how much a gallbladder weighs?) which I can attribute to sleeping all the time and eating cookies out of a box I keep on my nightstand. This is LIVING you guys.

Charley and Wes are at camp this week and next and are having a great time. The first day Charley got in the car at the end of the day and said "Well. The only place we have to go to the bathroom is a port-a-potty, which was fine until someone puked in it and then I locked the door from the outside because NO ONE needs to go in there." Yesterday he told me they did "nothing" because of the "stupid weather" but it came out in further conversation that he had actually gone canoeing and practiced archery. NOTHING INDEED. Wes has gone swimming and played hot potato and that's all I've gotten out of him. Also, there are free lollypops in the camp store? So that's good.

James and Mary's school is in session until the end of next week. Yesterday James brought me a flower and told me his friend gave it to him to give to me because "The doctor cut your tummy." Apparently my "gallbwadder" is the talk of the Tigerlilly room ever since James regaled the class with the story during rest time on Monday.

Other than that dramz we've been summering it up big time around here. Lots of popsicles. Lots of outside play (when there's not a tropical storm and then it's lots of popcorn and movies). We had watergun fun in the front yard with the neighbors the other day. 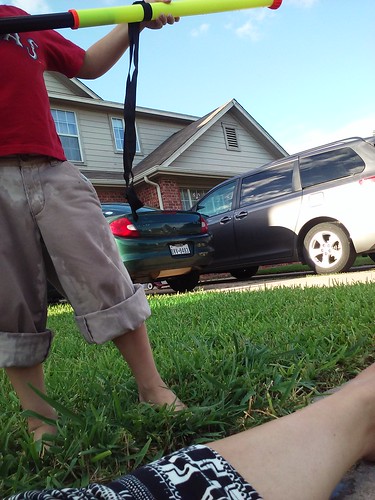 Ryan is out of town for work starting today and I have wonderful friends and my parents stopping by at various times bringing dinner and helping me take care of Mary (I'm not allowed to pick her up until mid-July, no matter how much she follows me around pleading "Mama" with her arms outstretched. Saddest thing ever. We spend a lot of time sitting on the floor cuddling together.). And for today I have three books to read and a new Megan Trainor album. Gonna be a good one.
Posted by Becca at 8:14 AM

James' friend sounds so sweet. Kids can be awful and they can be wonderful and sounds like he found a bunch of wonderful ones.

Gallbladder surgery! Glad you rocked that like a champ. Hope your single-parenting days pass quickly!