Somebody please explain to me why it is mid-May.

SO! Finals week happened. It was insane. I thought I'd have all this time to work on a couple of papers I need to look at but instead I found myself in a constant hair-on-fire scramble from the time my feet hit the floor until I finally collapsed in bed at night. By Thursday of finals week the kids all had tortillas instead of bread for breakfast AND LUNCH and I became expert at conjuring dinner out of the dregs of my pantry because ain't nobody got time for the store.

Friday was good. Friday I declared hookey day and accomplished exactly nothing except breakfast tacos with a friend and making a huge bowl of pasta salad for our dinner and dinner for a friend with a new baby. And then I invited two friends and their kids over after school and eleven of us ate four pizzas, a watermelon, and a bottle of wine. It was GLORIOUS.

Saturday was another work day on the kitchen, which should be done soon (soon in home improvement language, which means we might be eating at the breakfast bar sometime during Hillary's second term). The good news is that all the new cabinets are now fastened down to the floor and wall which means WE ARE DOING THIS NO TURNING BACK. 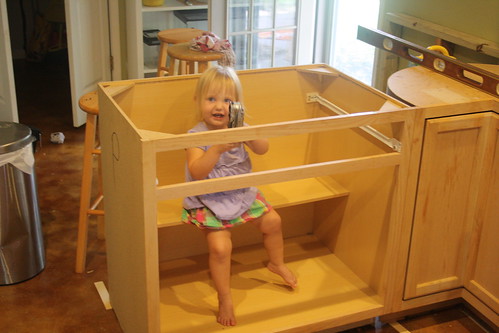 Mother's Day I was awakened by an eager kid bearing a cup of coffee including alllll the half and half in the container, flowers, and a stack of adorable cards. James painstakingly traced out "Happy Mother's Day" on his. Mary made a construction paper collage in the shape of a heart. Charley made me a pretty bag of bath salts and then told me "If you don't want to ruin all my hard work you can just smell it" so I think that's what I'll do. Wes made me several different cards to open during the day, my favorite of which said "I like when you cotle" which translates to "I like when you cuddle." COULD YOU JUST DIE?

We had breakfast at one of our favorite places, then went to church where we were gifted with three enormous bags of bagels from the moms ministry who had extra and figured (correctly) that our family could put away some bagels. It's been a great breakfast week. 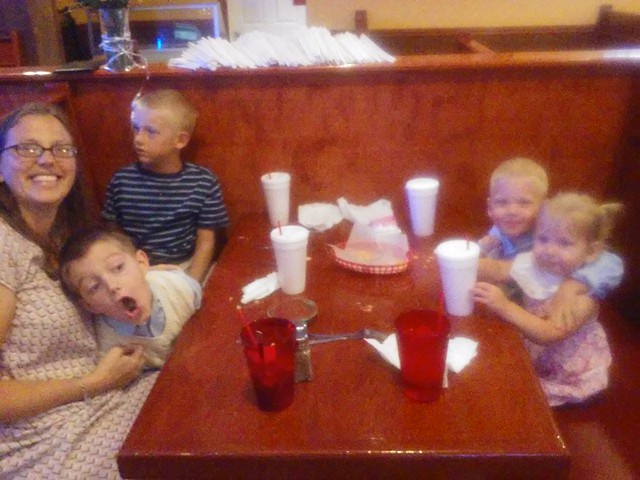 After church we had brunch with my sister and my parents. We got there early and while Ryan went inside to get us drinks Charley climbed up a tree and ripped off a huge scab he had from a scooter accident last week. Before I could get to him he had wiped the blood on his FOREHEAD because "Now I look like a MAN!" which was awesome. It's amazing what you can overlook when you're drinking peach sangria at a shady picnic table. 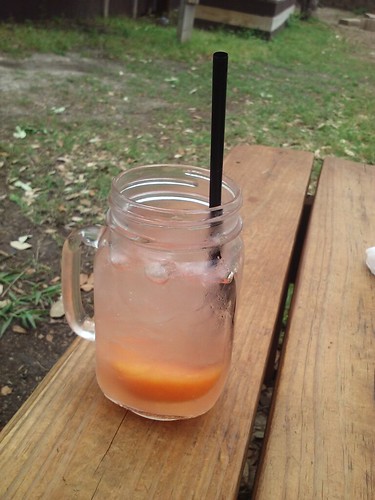 Peach sangria. My new favorite thing in the universe. 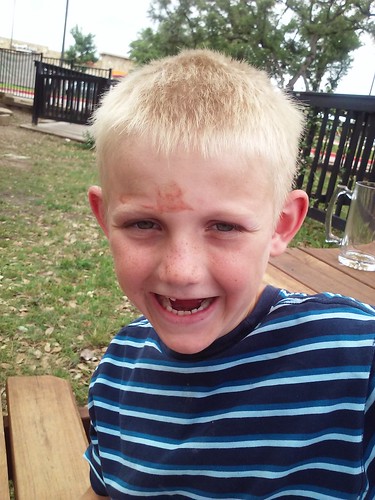 Another one of my favorite things in the universe. With blood on his face.

And then we went home to laze around in the backyard while Ryan grilled London Broil and bacon-wrapped asparagus for dinner followed by early bedtimes and more work on the kitchen, making lunches, and graaaaaading. Somehow between grading, professional development, and a rip in the fabric of time, the big kids only have a week and a half of school left and I will have a FIRST GRADER AND A THIRD GRADER. SOMEBODY PLEASE EXPLAIN THIS TO ME. (Little kids have school for another month so the big kids and I will be spending a lot of time eating popsicles at the pool and finishing up odds and ends home improvement projects since I decided to take the summer off. I'm kind of excited about it).

I will leave you with this video that I call "LEARN TO USE YOUR PHONE, MORON"

Another wonderful post, I feel as if I am a fly in your pocket! TS Ana gave us a fly by but it was just Hot and humid for a couple days, only a sprinkle precip wise. Hugs to all from D'n Me! xoxox