OMG you guys we were totally "those parents" this weekend. We actually *birthday party hopped* Saturday afternoon. And that was after an early morning soccer game (soccer game we screeched into fifteen minutes late because *someone* (me) went to the wrong field then stood around wondering where the heck our team was for ten minutes before realizing my mistake and rushing everyone across the muddy field, fording a small river on the way to the parking lot (May has been SO RAINY YOU GUYS), driving three blocks to the appropriate field, and unloading Wes directly from the car into the game, WHICH WAS ALREADY IN PROGRESS).

After the game we hung around with some school friends at the field then dropped all the kids off at the adjacent YMCA childwatch so Ryan and I could watch Revenge of the Sith in the cardio theater. This was about as relaxing as the weekend got. Forty-five minutes on the treadmill.

And then we went home where we ate lunch and put the little kids to bed. Ryan wanted to work on the kitchen so my plan was to take the big kids to the pool, but first I confessed to my neighbor who was having an all-girls birthday pool party for her daughter, our friend, that we were headed to the same pool just for fun and we would probably see them but were definitely not attempting to gate crash an eight year old's birthday party and she said "Oh stop being silly, just come with us!" so we did and that was Party Number 1. So fun.

Sadly we had to leave that party before it was over because we had to get to Wes's second party of the day, which was at a church gym on the other side of town. This party was less relaxing (there were like five thousand loud kids in a church gym for goodness sake, but Wes had a BLAST playing tag and dodgeball) but I got to spend time with some of my nicest friends (one of the same friends from soccer that morning COMMUNITY WE HAS IT!!) and have another piece of cake. And really cake is the reason I sign up for birthday party duty (Charley would say "haha you said dooty").

When I got home the pool party had relocated to my neighbor's driveway and now involved several bottles of wine (Also, while I was at the birthday party, James was having a big boy playdate with his friends across the street, and then JOINED THEM FOR DINNER. I love this so much. He did great, they say). I hastily ate a couple of hot dogs before shooing all the kids out to play (with the sizeable throng of kids playing in our culdesac-ish-street) and joining them. Ryan was putting Mary to bed and the kids were playing and everyone was having a lovely time before Charley and Wes got into a violent screaming match over whose turn it was to drive the Power Wheel and I had to do my best Jerry Springer parenting just to get the brawl back inside the front door (made more complicated by the fact that I'm still not really supposed to lift them so there was just a lot of tugging and threats). Ryan, who was having a cozy time reading books to Mary, was surprised when I carried a screaming James past her bedroom door then deposited him in his bed with a stern "WE DO NOT BEHAVE THAT WAY IN FRONT OF OUR FRIENDS. GOOD NIGHT." Together we got the other two in bed WITH NO BOOKS BECAUSE O.M.G.

Then we rejoined our friends in the driveway with the wine because OBVIOUSLY. I made it until NINE before I could no-longer contain the yawning and headed home for some Harry Potter and the Deathly Hallows.

Wes coughed his croupy cough all night last night so I took him to the after hours doctor this morning while Ryan took everyone else to Sunday School (He has croup, duh. Croup that really wasn't that big of a deal once we left the doctor, who prescribed a spoonful of honey as needed and to try letting him stick his head in the freezer). After stopping at the store for honey and dinner ingredients we made it home with about twenty minutes to spare before we would need to leave for Big Church (which was the plan if Wes didn't have strep, which he doesn't). I was standing frozen with overwhelm in my kitchen when I realized that after our crazy Saturday and given our tight Sunday afternoon schedule that staying home to put dinner in the crockpot and make cookies for Charley's piano recital rather than taking a hasty shower and throwing a half-assed mess of ingredients into the slowcooker before forgetting to turn it on in a mad dash out the door would probably be a lot better for the family.

So I spent an amazing couple of hours in the kitchen cleaning up, making cookies, and making dinner while Wes did Wes things and a gentle thunderstorm went on outside. You guys. It was like the anti-Saturday and I soaked every minute of it in. When Ryan and the other kids left Big Church we met for brunch. By popular demand, Ryan ordered a basket of truffle fries for the table and the kids fell upon it like they were returning from six months at sea. When all the fries were gone Mary pitifully signed "more" over and over while Wes pulled the tissue paper out of the bottom of the basket and licked it clean of all truffle oil residue.

I entertained James and Mary for several minutes by taking their pictures and then showing them themselves on the screen. 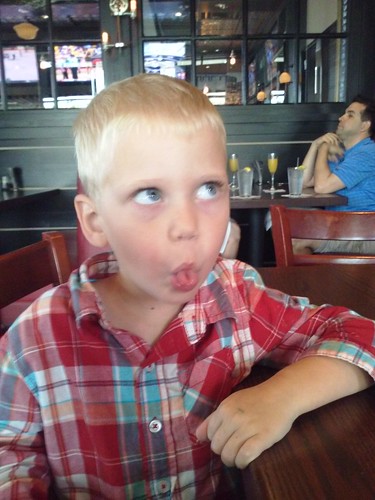 Later James outdid Wes's truffle fry licking behavior by leaping from his chair and running to the men's room, pulling down his pants while still in the dining room (not pictured). Charley loudly exclaimed after every bite that his fish and chips were "a delicious mess of food" and Mary dropped so many pieces of cutlery that there were no forks left on our table which had been set for ten (I also dropped my knife a good five times, either because the table was at awkward height or because I have a motor-neuron disease, but probably the table).

In short: it's been a LOOONG time since the kids have been to a restaurant without a playground. Or a speaker you have to yell into.

Once we got home we had to get ready for Part II of The Weekend of All the Things. Ryan had to go to his choir concert and Charley had a piano recital. Miss N was coming to watch James and Mary, who are not the type to sit quietly through an hour of piano music and my parents were meeting us too.

Charley did amazing, as did all the other kids. I loved everything about it. I am so proud. He has worked really hard this year, practicing every day, memorizing his music, playing for all his friends, even playing for his class during music one day. He truly loves it and I am so glad we found his amazing teacher. JUST LOOK AT THAT BIG KID!

After the recital the kids ate approximately six cookies each while we chatted in the backyard and then we jumped back in the van, changed out of our recital clothes, then drove to ANOTHER BIRTHDAY PARTY. This one was at one of those indoor jumpy house places, which was the perfect place to work out all the nervous energy from the recital and also the massive plates of cookies. They re-emerged after an hour, bangs plastered to their foreheads, for pizza and cake and then we FINALLY went home at nearly seven to eat second dinner, the potato and sausage stew I'd put in the crockpot that morning.

And now all I have to do is read the last hundred pages of Deathly Hallows before I go to bed. Should be NBD.
Posted by Becca at 8:10 PM

Your weekends sound so fun, if a little frenetic...driveway drink-in seems like the perfect balance technique...I saw these great garden wineglass holders in a catalog, like a huge hummingbird holder for grownup (stemmed) wineglasses! With progressive friends like you have, they probably already own some! Hugs all around!