Real Talk: Do these pants make me look like Big Bird?

A friend of mine swears by these pants called "Rock star jeans" sold by a popular but affordable retailer that rhymes with Fold Baby. I've been wanting a pair of gray skinny jeans for some time now and this particular store only carried gray in the Rock Star style, so despite my misgivings that I normally buy the more conservative "Sweet Heart" style, which is code for "These barely qualify as not Mom Jeans. Barely." I bought a pair online last week when I was annoyed about something completely unrelated to clothing that I now cannot even remember.

They arrived on Friday afternoon, along with two dresses for Mary and a bunch of long cardigans for me to wrap up in during the frigid Texas winters and the two uniform sweatshirts I originally went online to purchase for Charley and Wes and I excitedly stripped down and tried them on in my kitchen in the middle of the afternoon. They seemed quite tight, but in a really comfy way. I really liked the way they moved with me and didn't shift around. I was less certain about the way I could faintly make out the edges of a scar I have on my knee from where I got stitches when I was ten through the material. I wondered if I would start a fire if I attempted to put them on without first shaving and moisturizing my legs.

The next day I put them on again and called Ryan into the kitchen. "Will you come tell me if these pants are age inappropriate?" I asked. He appeared in the kitchen doorway seconds later. "No." he assured me, "Absolutely not."

So with that ringing endorsement, I wore them to work today, along with a sleeveless button up top I got for two dollars at LOFT and a hip-length black boyfriend cardigan and my brown moccasins. And I felt awesome. Class went really well, I felt great sliding around the classroom in my tiny pants as I answered four chapters worth of review questions in advance of their exam on Wednesday. Afterward, we had fun talking about the upcoming low pressure system that's going to bring us five inches of rain. It was a great class! These were my confidence pants.

And then I walked to the dining hall to pick up my lunch and caught a glimpse of my reflection in one of the glass doors, which was the first time I'd seen the whole view since we don't have a full-length mirror at our house. And things seemed slightly...out of proportion? Little legs big body?

Honestly this is the first thing that came to mind: 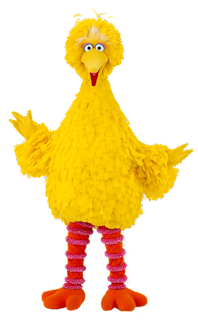 (This did not stop me from loading up with a ham and cheese on french bread, a pound of sweet potato fries, and two cookies.)

Ryan came by later that afternoon and I forced him to take a picture of me so that I could do a side by side comparison with that Big Bird picture, which I did from the safety of my flannel pajama bottoms and oversized tshirt.

And the verdict is: If a pair of pants can make me feel cool while teaching climate, or even SITTING IN A GOLD MINIVAN IN THE SCHOOL PICKUP LINE (!!), then I need at least two more pairs. Maybe they will help me finally tackle that Python issue that's been giving me so much trouble. After all, they are my confidence pants. And also, there are NOT THAT MANY MORE OPPORTUNITIES to feel cool you guys. The window is CLOSING. $27.50 is a freaking BARGAIN.
Posted by Becca at 7:13 PM

Let us know where you bought these magical pants!

I laugh-roared at you wondering if not shaving/moisturizing your legs would start a fire. Too, too funny!

You look great, by the way, not like Big Bird at all!

They look awesome on you! Seriously. Super cute. Now I'm going to see if they have burgundy...

Cute! These are my favorite jeggings to wear with a dress, but I never thought about wearing them as actual pants. I can tell you that the same pair I wore before I had Cooper fit all during pregnancy and again after-- miraculous.

I commented yesterday, but it disappeared! I even did it on my phone and I HATE typing on my phone.

Anyway, I have sworn by Rock star jeans for years- my very favorite pair was purchased from Fold Baby in 2010 and I still wear them, though they are finally disintegrating after their 1,000th wear. Two more pairs are on their way to me through the mail right now! Confidence pants are always awesome, but they're even awesomer when they cost less than $30 and last for four years.

Totally hip and cool! Where on earth did you get Big Bird from? You are ADORABLE!!! (And now I want a pair. Or three.)