Two weeks ago James fell off of Charlie's razor scooter and hurt his foot so bad that he has been limping ever since.  The day after it happened, we took him to after-hours clinic to get it checked out.  Mary pooped through her clothes while James was getting xrays and James refused to walk AT ALL the entire two hours we were at the clinic, so that was a special time for all three of us.  He got to wear an Ace bandage home, which the big kids found SO FREAKING COOL that they all signed it with a Sharpie and told their friends that their brother got to wear a CAST.  Even though he was limping and his foot was bruised and swollen and tender in the office, the xray didn't reveal any broken bones, so we took the bandage off the next day when everything looked normal again.

The other day I finally surfaced from the head-down non-stop slog of domesticity long enough to notice was still limping and refusing to run.  Sure he limped worse when we said something about it (ATTENTION!!), but even on days I make a point not to say anything about it, there he was, hopping along, clearly trying not to put weight on his left foot.  Hrmm.

My friend's husband is a podiatrist and he suggested we take him to a podiatrist for the follow up instead of the ped, so we took him in yesterday (me, Wes, Mary, and James).

The podiatrist was a very nice man who told us he had two kids of his own, 3 and 5.  Awesome!  He opened a potty training anecdote that was simultaneously incredibly gruesome and kinda awesome (confidential to James: you can poop on the couch all you want as long as I don't have to give you an enema, EVER).  And then he got to business on James's foot, pushing on the bruised part, making him bend it all around.  James did not react.  The doctor pushed harder.  James did not react.  So the doctor gently rolled James's pant legs up and had him limp up and down the hall.  Yup, he's definitely limping.  And his foot was definitely discolored on top.  Weird.

He still didn't see a fracture when he rechecked the xrays, but the limping and the bruising meant he should wear a boot over his shoe for the next two weeks.  They didn't have any teensy weensy little ortho boots at the doctor's office because most parents do not allow their two year olds to get into situations in which they might sprain their ankles/feet (we're so freaking crunchy and free range!  I never knew!).
On our way home they called to tell us they had tracked down a tiny boot for James to wear at a "pharmacy" nearby, so we drove there to pick it up.  The "pharmacy" turned out to be a prosthetic and orthotic clinic, complete with a really fascinating (to Wes) promotional video about prosthetic limbs for injured soldiers playing in the waiting room on a TV the size of a ping pong table.  While Wes watched the video with rapt attention, James ran around the room in tight circles.  RAN.  With no sign of a limp.

They finally called us back just before I had to explain to Wes what an IED is and while the nurse examined James's foot, Wes suddenly became a super-helpful fount of information about what exactly happened to James on his scooter (that none of the adults actually witnessed because we are so freaking awesome at this).

"James fell off of Char-wee's scooter in the culdesac!  He went down our neighbor's driveway REALLY FAST and there was a curb at the bottom and he fell off.  And he wasn't wearing any SHOES!" [or pants, if I am remembering correctly].

Well MYSTERY SOLVED!  We were wondering how in the world James got going fast enough to actually hurt himself!  As it turns out all it takes is our neighbor's forty-five degree inclined driveway and a couple of big brothers (to model, I don't think they pushed him because one of them definitely would have tattled).

They also did not have the tiny boot, as it turned out, so I did a little digging and ordered one from Amazon.  It should be here tomorrow so he can wear it if the miraculous healing he experienced in the ortho waiting room wears off.

Wes talked about prosthetic legs all the way home and would like to have one for Christmas.  And James will be sticking to his three-wheeled Radio Flyer scooter for the time being. 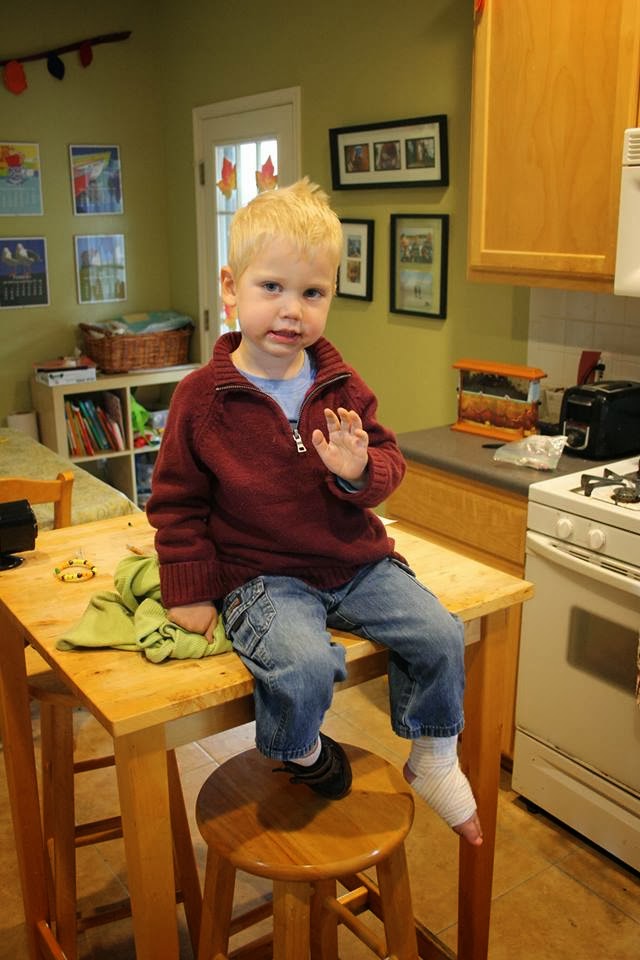 Never a dull moment with your crew.

I loled about James not wearing shoes or pants.