The pelvis icing will continue until further notice

So, a nurse called yesterday and said "JUST KIDDING!! Too many ladies have gone into labor on their own so your induction has been bumped into next week like Jet Blue."

That's right, friends, I am sitting in Terminal 5 of the JFK of obstetrics. Which is my living room.

I was, to put it mildly, upset yesterday after the phone call and stomped up the stairs, punctuating each angry step with a swear word. Of course I tripped and flopped over onto the stairs halfway up because I cannot walk normally, especially after the baby pool incident, and that made the yelling even more profane and R-rated. I (delicately) flopped on my bed and called Ryan who correctly surmised from my hysterical state that I would want him to come home for a few minutes to FIX ALL THE THINGS. And then I threw my phone against the wall.

When Ryan walked in about thirty minutes later I was still hyperventilating and told him "YOU FIND MY PHONE AND YOU CALL THEM. YOU TELL THEM ABOUT THE PAIN. I CAN'T WALK RIGHT. IT HURTS TO DRIVE. IT HURTS TO STAND. IT HURTS TO SIT. IT HURST TO SLEEP. TEEEEEELLLLLLL THHHHEEEEEEEEEMMMM."

He called and talked to the nurse, who gave me the party line, which was "rest, Tylenol, Tylenol PM, and ice and there's nothing we can do about the scheduling problem so sit tight." He nobly kept her on the phone for a good fifteen minutes, asking the same question over and over in different (but calm and polite! Which is the difference between he and I) ways. This is the same way he gets us free computer advice when one of us gets a virus or the power supply quits working five minutes before I have a Skype meeting. This is why he is in charge of these types of phone calls. But this time it didn't work.

When I finally calmed down enough to type I told Facebook what was going on. People are awesome, you know that? So much support and encouragement came back through the computer. I chatted with a friend "Can you come over? Tonight? After bedtime? And bring me my glass of wine for the week (OB approved!) and some of those chocolate truffles I like?" And she said "Whatever you need, I'll be there." So, so awesome, you guys.

I stayed in bed for about three hours, not least because I was embarrassed about yelling the F word at least twenty-five times right in front of my entire family and didn't want to go back downstairs. I downloaded a funny novel. I made snarky comments about how this was all Rick Perry's fault on Facebook. I chatted with sympathetic friends and invited a few to what I began calling my Pity Party.

I ate dinner with the family (which my mom made and cleaned up and my dad helped serve, all while taking care of the kids, they are one of the reasons I haven't yet chained myself to the door of L&D), "helped" with bedtime, which meant reading my new book while Charlie read his, all snuggled up together in the big bed.

And at eight o'clock, all of this showed up at my house along with three wonderful women full of righteous indignation on my behalf and lots of awesome pregnancy horror stories. My favorite chips, dip, and salsa, chocolate truffles, wine, and Ryan brought me a whole pitcher of water before he made himself scarce upstairs so I wouldn't have to get up off the couch, not that my friends would let me. 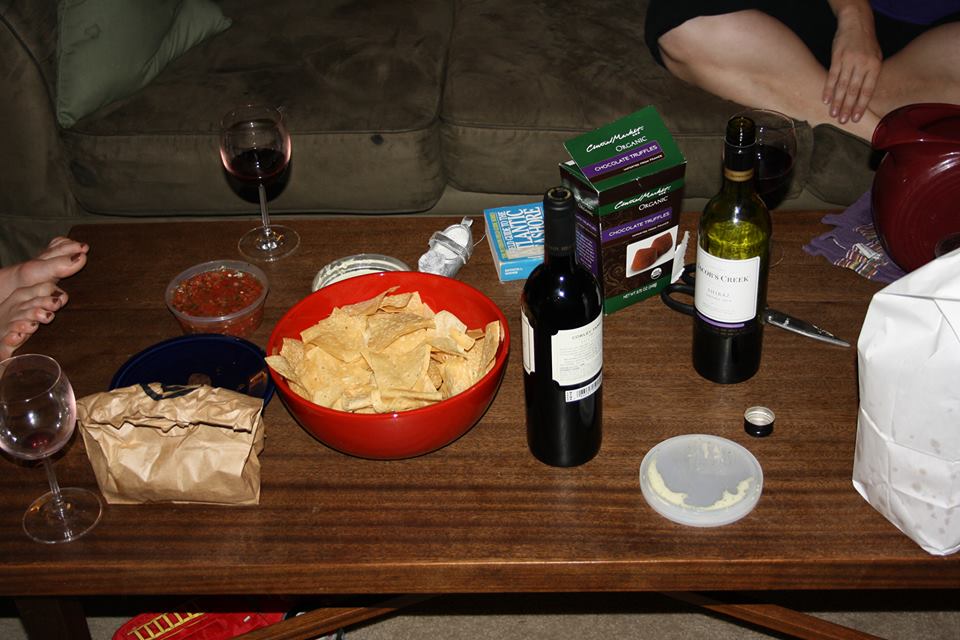 I was up until midnight and I woke up exhausted but smiling and somehow feeling much better. I had to go see the doctor this morning and she was sympathetic and profusely apologetic. She did a couple of things to hopefully speed things along naturally and then I hobbled home and parked it on the couch while my parents took the kids to have the time of their lives swimming and playing games and watching movies (when James saw me pick up my purse he yelled "BYE!" then ran into my mom's arms, they are clearly having a good time out there).

The new plan is going in Tuesday night for a Wednesday induction. That is a LOT of days from now, but everyone is taking such good care of me, it's going to be OK. Even if I had to ask the doctor to arrange my legs on the table for me, because once I'm lying down, I can't move.
Posted by Becca at 9:31 AM

I was similarly immobilized the last timeI was pregnant, and got enormous relief from a chiropractor. I came across some useful references while I was trying to persuade my insurance company to pay for it: http://www.mostgladly.net/cj/2008/11/dear-appeals-committee.html

Good luck! I still feel twinges when I go back to the park where I got hurt -- it was pretty awful.

Ugh...that sucks!! Sorry you have to deal with such a long delay. Fingers crosse baby just decides to come before then, but if not, hopefully the next few days aren't too horrible. Good luck!

I think you can safely upgrade your weekly wine-- you are going to be getting a giant supply of narcotics really soon-- what can a little wine hurt?

I can't believe I haven't commented, because I'm following your story with great interest, sympathy, and dare I say laughter (I can't help it, even when I know you're genuinely miserable and uncomfortable and furious, you're hysterical when you describe it- I feel such an odd mix of sympathetic fury and complete hilarity with every facebook and blog post). I've read your updates to a good portion of my coworkers (at least half of whom are pregnant) and we're all rooting for you, "my awesome friend from Austin."

Hang in there and I'm so glad you have great local friends to help see you through!

Awww, good friends are the BEST.