How to Win at Tuesday

Busy morning here.  Tuesdays are usually long and awful for some reason.  I don't teach, the kids don't have school, our day unfolds into a shapeless void of endless free time, we all get sick of each other and start bickering and then someone calls Ryan and tearfully demands Chinese food for dinner.  I should really keep James away from the phone.

So today I decided to get out ahead of it and pack our pre-nap morning with fun activities for the whole family!  Since our (my) favorite breakfast place serves kids for free on Tuesdays, that was our first stop.  I haven't taken two kids out to a restaurant with waiters by myself in quite some time.  This is mostly because James is, how should I put this--unpredictable?  Moody?  Insane?--when asked to sit at a table for any length of time.  Except at preschool.  I have glowing reports about his behavior and generally cheerful disposition from his teachers that I have yet to see demonstrated in my own home.  But that is neither here nor there.  Free chocolate chip pancakes and heaping piles of migas were calling our names.

Breakfast turned out to be quite pleasant, mostly because they gave us a huge six-person booth in the corner which allowed for much more climbing shenanigans than I usually allow.  Once the pancakes came we were in good shape and everyone had a nice time.  Especially Wes, who I realized, far later than I should have, was eating his syrup- and butter-soaked pancake with his hands then wiping them on his pants after every bite.  His pants were/are covered in sticky, greasy blotches.  It is BAD you guys.  I gently suggested maybe we should skip the next thing then go home for new pants and go to the Y, but Wes was adamant about storytime, so we went. 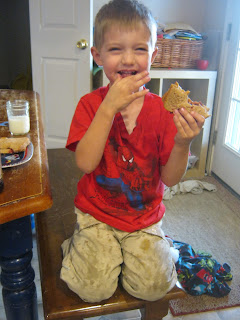 Wes was the KING of storytime.  He knew all the hand motions, all the songs, loved the parts where he was supposed to get up and WIGGLEWIGGLEWIGGLEWIGGLEWIGGLE!!!!  OMG SO MUCH FREAKING FUN!!!  It was kind of trippy, actually, because it was the same librarian who did storytime five years ago when I used to take Charlie the Only Child who got to leave the house once in a while.  James alternated between lying face down on the floor sobbing softly and sitting in my lap scowling at the other toddlers (this was toddler storytime.  Wes OWNED toddler storytime.  The actual toddler was mortified).  He'd had a massive flareup of his (non-contagious but horrible looking) Fifth's Disease rash, and between that and Wes's disgusting pants, we made quite the trio.  I tried to help James with the hand motions for "Where is Thumbkin" and he screamed "NO!" and glared at me scornfully.  So we probably won't do that again.  Unless Wes wants to go, which he probably will.  If you have the right attitude pissing James off can be kind of amusing.

The Morning-O-Endless-Fun continued with a trip to the Y for playroom (them) and lap-swimming (me, see: massive pile of migas, above).  We were still rashy and greasy by this point, but once you've done that in front of all the Super Moms at toddler storytime who really cares?  Plus: free childcare.  I had a great swim and the kids had a great time in their respective nursery rooms (from what I can tell) and they both fell asleep on the way home, right on schedule at 12:30.  They will probably stay asleep until it's time to go get Charlie, who will take over entertaining them when he gets home.  I WIN, TUESDAYS ARE AWESOME.
Posted by Becca at 11:23 AM

Why can't I ever remember the kids-eating-free-on-Tuesday thing? I guess I should just add it to my calendar.

I sincerely believe you could cover a boy head to toe in napkins and/or paper towels and he will still find a way to wipe his hands on his pants. And his mouth on his sleeve.

I love how once there are multiple kids, the oldest gets put in charge of entertaining the younger. Ethan and his friend Piper constantly get asked to "entertain" Piper's little. Someday they're going to catch on & demand to be paid babysitter rates.

Love it! Wes's pants! Ha! (I also love the PJS in the background because seriously, all I ask of my kids is that they put their friggin PJs in the laundry room, and it NEVER HAPPENS.