So I am a little behind on the documentation, you guys. I've been telling you all about lost and found lovies, poop diaper incidents, and blue toothpaste marks on bathroom counters and I haven't even mentioned Halloween OR Charlie's sixth birthday! He asked for a cake with an island on it, like the one he and Wes and Ryan rowed to in Maine. Also, 2+4=6, you guys. And we were lucky to find those in the junk drawer that now lives in the garage because the track broke and the whole thing fell down into the kid dishes cabinet. We are hanging on by a freaking thread. But look at that happy kid? Man he is cool.

So six kind of freaked me out. Mostly because I still remember wrapping him up in five layers of blankets and carrying him across the street to church in the old town when he was ten days old like it was yesterday and yet somehow a THIRD of his life at home has passed. A THIRD! Thirty-three percent! We (Wes) are still adjusting to having him out of the house from 7:30-3:00 every day. Saturday morning they were playing a made-up game in the back yard and Charlie wanted Wes to run away from him, but Wes wouldn't and said to Charlie as he followed him "But I LOVE YOU!"

In the mean time, these two are developing a sweet little friendship (a grudging necessity at first on Wes's part, but getting there now that James is turning into what we call "a real boy".). Charlie is doing so much better in school. His teacher says he is doing great (except for the day after Halloween, which, COME ON) and gives him extra homework (read and respond type assignments with lots of free writing and drawing (no more coloring!!)), which he LOVES. She is great, too, even sending us all her address and encouraging the kids to come Trick or Treating at her house. Candy inspection back at the Bat Cave.

As for me, I have one week of class before Thanksgiving and one after and then I am DONE until January (except for the teetering pile of grading on my desk that needs my attention). I taught one more class this semester than I ever have before and though there were times when it felt like way too much, there were were more times when it felt really perfect. This is the semester I realized how much I love teaching and would miss the students if I was only a researcher. I love that side too, though, so I'm trying to find ways to fit it in as much as I can.

Though it will probably lead to more scenes like this. 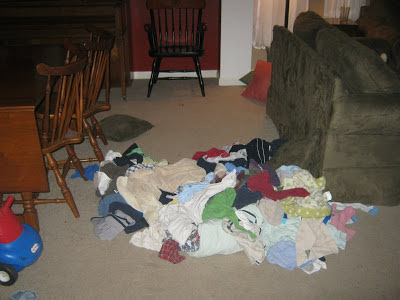 Keeping it real. I will get to it later.

This has proven to be a really awesome toy. But can also be really frustrating. Check out that tongue! That's how you know they're really thinking. Wes has started napping again, by the way. Rossby likes the company. The last time the coffee table was ever that clean.

And now I need to clear a path to my bed, set up a humidifier in Charlie's room, clean up the kitchen, and stay up way too late reading (I am reading Jodi Picoult again after picking up Sister's Keeper on my trip and another one at a used bookstore here. It's been a long time since I've read fiction and it has not been good for my sleep schedule.).
Posted by Becca at 7:23 PM

Where did you get the marble run in the second to last picture? I think Santa is going to get Landon one of those for Christmas and his elves aren't sure where to look (I mean built from scratch...)

Your boys make me smile :)

You make me smile Bec! Hugs all around. Everybody looks pretty happy in all these pics, I think you've turned a corner, maybe.

Rossby is gray!!!!! My little old man. I wish he could visit Attention Camp again, only this time we would all just take naps and eat tater tots :)
-gm

So glad that school is going well for Charlie now! Happy belated birthday to him!

Nice candles-- that made me laugh-- very creative. 6 is old, right? I got a little bummed when you said 1/3 of his home life b/c I am pretty sure Harry plans to live in our basement all the way through law school-- we're never going to be empty nesters.

Such cute pics. I especially love Batman's enthusiasm and Superman's timidity in that first photo.