The kids told me their plans to be Woody and Buzz for Halloween sometime in March, so naturally I am just now getting around to doing their costumes two days before dorm trick or treating and three days before the school Halloween parade.

I started on Woody's vest first. Wes is Woody. I will probably not get to Buzz until tomorrow night after my Girls' Game Night, which is actually quite appropriate.

First I gathered my supplies. I needed cow-print fabric, scissors, thread, and a sewing machine. 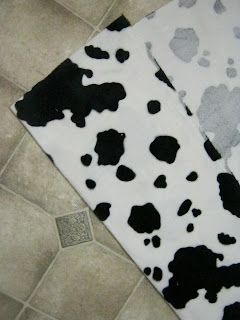 And if you are an emotional eater and tend to get frustrated while crafting, you will also need some homemade sugar cookies. 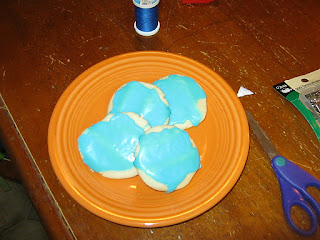 The first thing you do, and this goes against everything I've ever believed about last-minute high-pressure crafting, is to make a pattern of one half of the vest front from a piece of paper.  I know what you are saying, "But it takes ten extra seconds to make a pattern!  I could use that time staring out the window, or Tweeting!"  Believe me.  It will save you time later. 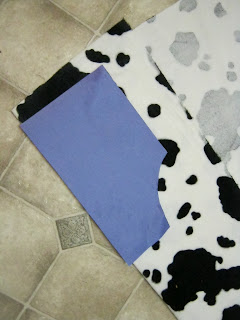 You will need two front halves for the vest and one back piece.  I used the same pattern for all three pieces but made the back piece slightly narrower than the front pieces.  Also, I had a ton of fabric so I doubled the front pieces so if he opens up the vest there will be cow print on the inside too, know what I mean?  Fancy.

Be sure to leave extra fabric to account for seams.  Or, you know, forget and then spend the rest of the project wondering if you're going to have to make your baby be Woody instead of your three year old because it's looking way too small.

Quell your panic by going upstairs to measure the pattern against your sleeping child after you've already cut out the fabric.

Next you will turn the vest halves inside out and sew around the outside.  If you are me you wil come *thisclose* to forgetting to leave an opening so that you can turn it back out the right way after you sew the seam.  Don't do this.  You will never find your seam ripper at this time of night.  Here's what a vest front half looks like after it has been sewed.  The bottom was left open on purpose. 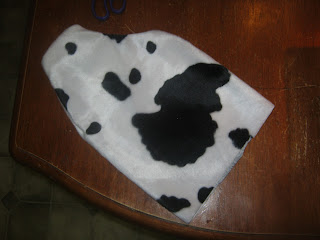 Then you turn it right-side-out and top-stitch it.  I'm a fool for top-stitching!  It always looks so neat and finished and it used to not be possible because (and I did not know this) my sewing machine was broken and made really ugly seams.  Two days at the repair shop and it is now good as new and I no-longer need a Xanax to approach a sewing project.  I sewed a 1/4" top-stitch all the way around.  This is also when you can close up that bottom edge.  Fold it inside with your fingers and then sew it.  You could pin it if you had that kind of time and energy. 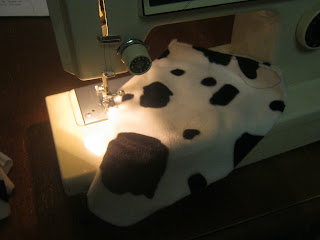 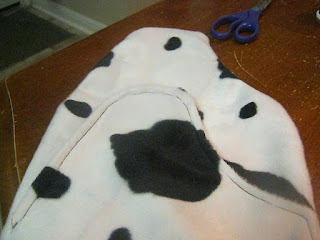 For the back, fold each edge in about a half an inch and sew it so it stays flat.  From the outside it will appear to be TOP-STITCHED!  But you will know about your secret short-cutting ways!  This is how I save time so I can do important things like stare out the window and wish it would rain. 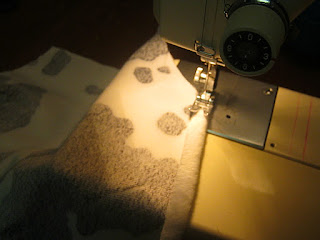 Once you have all three pieces prepared you can sew them together by flipping everything inside out and sewing along the sides.  Be sure to leave armholes.  Unless you are making a straight-jacket vest.  Stay tuned for a future post about our new discipline technique!

After it was all done I sneaked into Wes's room and tried it on him while he was asleep.  You may find this creepy, but I for one will sleep better tonight knowing that his vest fits him perfectly. 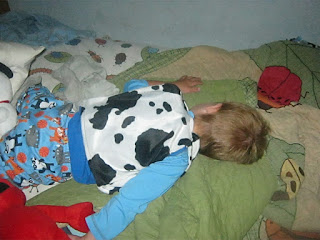 For my next trick, I will turn an ordinary diaper box into BUZZ LIGHTYEAR, SPACE RANGER!  TO INFINITY AND BEYOND!

You are so crafty. I am simultaneously impressed and jealous...

Awesome! Love the sleeping try-on! He is going to be a super cute Woody.

So cool. I do not even have a sewing machine. You are a rockstar.

Oh how crafty, that's great! My mom used to make my Halloween costumes, and I feel a bit badly that I use my credit card to make (erm, buy) my kids' costumes. But seriously, I don't think I'd know what to do with a sewing machine even if it threaded the needed itself. Home ec FAIL!

You MAKE costumes? You overachiever. ;)

This is basically magic to me.

Hmmm, I wonder if my sewing machine is broken too since it does terribly ugly things. Or maybe I am broken and do not know how to sew well!

Great vest and I can't wait to see Buzz!

Adorable! I love that they're coordinating costumes. I tried so hard to get mine to match, but comprimised when E agreed to make his costume instead of buy it at the party store. So I've got a Bat Ninja and a Tiger.
I can't wait to see the Buzz! I'm super-impressed by your craftiness.

1. You are hilarious.
2. The vest is cute.
3. I can't believe your kid slept through that.

And you HANDMAKE COSTUMES, TOO??!!! Awesome! But more awesome than that? Stealthy night moves to try aforementioned costume on sleeping child. LOVE IT!!

I would like to see a tutorial as to how to have a child that sleeps through application of clothing. And the mere opening of a bedroom door, while we're at it!

I have been up past midnight on October 30th more times than I can count. Did the Woody costume when the first Toy Story was out and had a heck of a time with the faux leather boots. The kids have revolted and only want store bought costumes this year.

I'm very impressed! Now I want to follow you on Twitter. How do I find you over there?

I'm really impressed! And also kind of embarrassed about the post I just wrote, in which the extent of my "crafting" involves printing things off the internet and hanging them up!

its official; I can no longer read your blog posts in public--too many looks from strangers as I fall out of my chair at Starbucks from the laughing.

I am thinking of getting a sewing machine for the first time EVAR and I'm scared. But its good to know that sugar cookies help.