After staying up way too late cooking and straightening and drinking wine with my friend I woke up in a frenzy and, once everyone was wearing pants and shoes, insisted we leave immediately for breakfast tacos so that the restless big boys didn't eat the cake and destroy the pristine living room where we would be celebrating James's baptism with a brunch later on. We were almost there when I remembered that I hadn't brought James a bottle. And that is how I found myself huddled in the third seat of my car with my dress up around my armpits, feeding James in the parking lot of the barbecue place.

Ten minutes later we were screaming into the church parking lot where all of our family was already waiting for us, peeking out the window of the lobby. And ten seconds after that I had hastily assembled everyone in front of the sanctuary for a very confusing family picture.

It was time to go up front before I knew it. We had just begun the liturgy when Charlie looked up at me sweetly and informed me that he had to go potty. I told him he was going to have to find a way to hold it then spent a few minutes wondering what I would do if he wet his pants in front of the entire congregation. Luckily that never happened because the only thing I came up with was "ignore, take pictures from the waist up." James was a sweetheart despite not feeling very well and very content, even when the minister carried him around the sanctuary to meet his new family. He's been practicing for this moment, when lots of people are touching him all at the same time, his whole life. 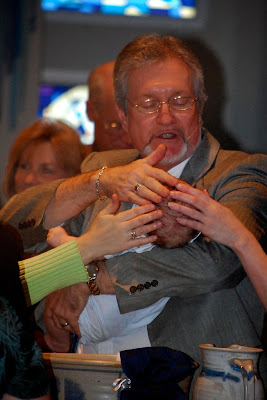 Afterward the minister tried to hand him back to me, but I was holding Charlie and Ryan was holding Wes and he had to give James to my dad because dude, we are outnumbered by THE CHILDREN.

Look, the whole family was there! I promise we were all there. Just not all in the same picture. Nothing a few minutes with Microsoft Paint couldn't fix. Look! Ready for the Christmas card! Charlie and Wes spent the entire service facing their "big cousins" behind us doing who knows what. At least they were quiet, right?

Ryan left early to go get the casseroles in the oven (I made this and this). When I came home with the whole big family the table was set beautifully and the house smelled like wonderful food. So now we officially take up all five lines on the sign-in pad at church, including all three spaces for children's names. That's a LOT of kids.
Posted by Becca at 7:38 PM

What a super family this is.I am proud to be a part of it. GGMann

YOU PHOTOSHOPPED WES! I love it so much!

Looks like a wonderful family moment - congratulations to James! And your dress is cute!

Nice job with Microsoft Paint! I had to double look to see who'd been added in. It looks like a fabulous day, and I am super impressed by how together you are, especially for being outnumbered by tiny ones.

Above all else, you are a true lady, maintaining modesty with your skirt in church while mayhem is busting out all around you. In my book you get a pass for hiking your dress up in the van of my dreams (since you are building a human being and all.)

Did Ryan make the cake? Wasn't he the fondant king for a past birthday?