OK, so those of you who teased me yesterday about nesting because Ryan and I did six loads of laundry and I baked pumpkin bread and sugar cookies shaped like candy canes and made a big pot of chicken soup for dinner? And I scoffed that all of those things NEEDED to be done! The laundry was backed up because of the leaking washing machine! It's BAKING SEASON! That is practically liturgical, certainly not hormonal.

Well judging by the undeniable urge I had this afternoon to attack my kitchen with a dishtowel and a sinkful of Pinesol, you may have been onto something.

This morning I folded the last of the six loads of laundry and put some of it away and was ready to call it a day. But then Charlie decided to take a nap (miracle!) and Wes decided he'd rather watch Thomas the terrifying Tank Engine all afternoon, which I was juuuuust fine with me since it meant I could still carry out my naptime plan of doing absolutely nothing. But then I ran out of blogs to read and ate as many cookies as possible without Ryan coming home and thinking "what the heck happened to all the cookies?" and I thought "I'm just going to straighten up the lunch dishes and run the dishwasher."

An hour later I had scrubbed the baseboards and walls AND mopped the floor and 409ed the counters and cleaned the sink and started the dishwasher. My kitchen is GLEAMING my friends. Also, we are disgusting pigs for letting it get so bad.

And then I started to worry that I hadn't heard from Wes in a while. I went to check on him and found this: 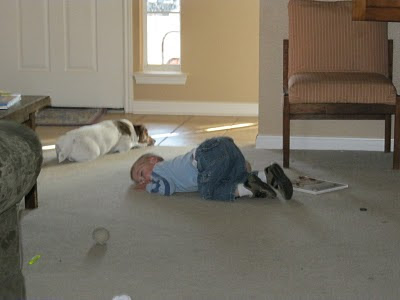 No nap INDEED. I think I'll make these next!
Posted by Becca at 1:07 PM

No, it IS liturgical!! I think its a holiday season thing because I also cleaned some baseboards and baked sugar cookies yesterday, and bought the ingredients to make chicken soup later this week. And I have pumpkin bread in the fridge!!! The similarities here are really weird, actually. You aren't putting up your tree tonight, are you?
-gm

Interesting...maybe the nesting is a sign? :) I'll be thinking happy, water-breaking thoughts for you! -abby

Though I don't want to ahve to clean every day, I love the time that I can spend getting my house back in order. And I'm not even pregnant.

Cleaning baseboards is a sure-fire water breaking technique! Love that picture of Wes.

Love how kids sleep like that. Cracks me up!

I think the only time I EVER cleaned my baseboards was right before my water broke with the V-meister. So, I fully expect to hear about some hatching very soon!