Another tranquil birthday morning at my house

After a lovely night of cool weather and gentle thunderstorms, Charlie's birthday was heralded in much the same way every morning is greeted in this house: a slamming toilet seat, a flush, and Charlie's door snapping shut as he went back to bed "until it's daytime." Little did we know after glancing at our alarm clock, which read "5:50" that it already WAS morning, the birthday boy having changed the clock's time zone unbeknownst to us sometime yesterday. Twenty minutes or so later I padded down the stairs groggily to frost the sugar cookies we would be taking to Charlie's class, so proud of myself for allowing enough time to get everything done. That is, I was proud until I reached the bottom of the stairs and both the clock on the microwave and the clock on the wall read 7:15. OH SHIT.

"RYAN GET THE KIDS DRESSED IT'S SEVEN-FIFTEEN NOT SIX-FIFTEEN! I'LL MAKE THE LUNCHES! HURRY HURRY HURRY WE HAVE TO EAT SOME CUPCAKES QUICK!"

People started trickling down the stairs around 7:30, demanding licks of icing off my spoon and complaining about being hungry. We were finally all assembled at 7:40, ready to sing Happy Birthday to Charlie and eat some cupcakes and bananas.

We managed a fifteen minute period of calm congeniality while everyone ate his cupcake--even Wes wished Charlie "Happy Day, Chah-weee!"-- but then we were off to the races again. Ryan was only twenty minutes late to work and I managed to slap together a respectable enough outfit in about forty-five seconds then get us all to preschool on time with no trouble, though I did miss out on the usual parking lot chit chat that forms the basis of my social life.

After I dropped the boys off I went to the sanctuary to wait for chapel to start because birthday kids get to go up on the STAGE and get a ribbon. He looked so proud and grown up up there. 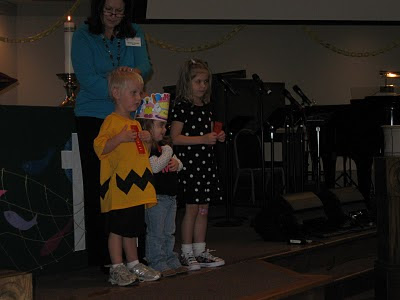 He wore his new Charlie Brown shirt, his morning birthday present. He may never take it off.

I stopped at the store on the way home for my forgotten breakfast and caffeine then picked up one of everything in the kiddie sporting goods department at Target, including the bat and ball Ryan requested "covered in foamy stuff so they can't kill each other with it." Wes scored a new mini basketball because I was feeling guilt and sensed that we will need something to distract him when Charlie starts unwrapping the big boy choking hazard Legos.

I just hope he remembers HE asked for a grocery store cookie cake tonight after dinner because after three birthday parties last month, Halloween, and the cookies for his class (which I made at 10:00 last night after meeting with another professor for a crash course in geology for the course I'm teaching in the spring), the bakery is CLOSED.

And also, wasn't this picture taken like, last week? Seriously. We have to stop giving him so much milk! Charlie, fresh from the hospital, when I still knew everything there was to know about raising babies.
Posted by Becca at 8:53 AM

You have to love kids pushing alarm clock buttons- AJU5 had me confused a few times in the past too.

I can't believe Charlie is 4. They are just growing up too fast!

Happy birthday, cute little man!! Did these four years fly by for you, Becca? He's so adorable.

Happy birthday, Charlie! Somehow we usually end up everywhere on time on mornings like that...but my stress level ends up through the roof! LOL.

Awww, BubTar had that bouncy seat, too!

Wow, you made amazing time! I hope Charlie had a wonderful day.

oh my goodness, that teeny baby!!! Hes so grown up and wearing a Charlie Brown tee-shirt!