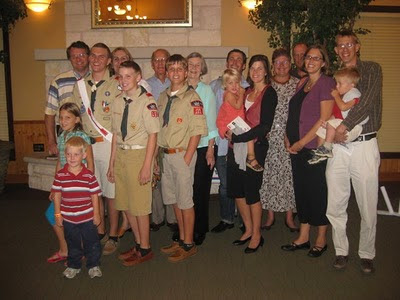 Last night we went to the Eagle Scout Court of Honor for my cousin, Matt. Each of his brothers played a role in the ceremony, which was led mostly by the boys in the troop. I listened to most of the ceremony from the hall with Wes, who had spied a plate of cookies and wouldn't take no for an answer, but Ryan and I were both impressed by the maturity of the boys in the troop, their pride in the two Eagles, and the way the older boys lead the younger ones during troop activities. At the reception afterward Wes ate cookies and cake for dinner and Charlie hit up the chocolate fountain with a SPOON until we had to rip it out of his hand and remove him to another part of the room. The boys watched, fascinated as the older boys jostled and roughhoused and goofed around. Their big cousins ran them ragged. It was pretty much the best day of Charlie's life.

After the boys went to bed, Ryan did some Googling and was disappointed to learn that we have to wait THREE MORE YEARS to buy Charlie his first neckerchief (which means five more years for Wes). I don't know who wants to be a Boy Scout more, Ryan or the kids.

After spending the evening soaking up the influence of all those nice boys Charlie woke up this morning in an awesome mood and continued to amaze me with his great behavior all day. After we played basketball this morning Charlie said "Thank you for taking me to the Community Center, Mama. I had a great time. I hope we can come again soon!" Then he went and got Wes's basketball for him (Wes was very displeased that we were leaving), carried it to the rack, and walked nicely out to the car, holding doors for me all the way. It was WILD y'all.

The amazing behavior carried over to the grocery store. They haven't BEEN to the grocery store in weeks because the behavior was such an issue I'd rather go at ten-thirty at night than take them with me. Today it was unavoidable, but amazingly they sat placidly in the cart feeding each other grapes as I got everything on my list. When Wes started to fuss because the tower he built out of cans of beans tipped over Charlie stroked the back of his hair and said "It's OK, Wes, you can build it again."

I actually started to feel a little bad, like maybe I've been too hard on him. But no, you really can't be too hard on a kid who is eating directly from a chocolate fountain with a spoon and starts up again every time you turn your back. He just had a good night's sleep and is growing up a little more every day.

And he watched his Big Cousins, whom he ADORES, lead all those younger boys in the Eagle Ceremony last night. It had a big effect on him. I've answered countless Boy Scout questions today. What do Boy Scouts do? Do they play sports? Do they play with toys? What is it like to go camping in the woods (One detail of that conversation seemed to stand out; this afternoon he ran out into the back yard, went potty in the grass, and exclaimed "I'm a BOY SCOUT!" Ryan was so proud.)?

Would it be so wrong to sneak him into a few meetings now?
Posted by Becca at 6:29 PM

So does this mean Taco is a boy?

I love watching AJU5 with older children. I can't wait to show her even more parts of the "world" as she grows.

Surely there must be a similar program for younger children? Scouts Canada have programs that start at age 5!

And Becca? How beautiful are you? And tall. And beautiful.

Love reading about your experience attending the Eagle Scout ceremony! I can't say enough good things about the Boy Scout program. I clearly remember buying my oldest son's first neckerchief, and now he is working on his Eagle Scout project as I type!

I LOVE this post. (I would also love to eat a chocolate fountain with a spoon-- it sucks to be a grown up sometimes).