When I opened the back door to let Rossby out this morning I was shocked to be met with a blast of not-already-stifling-hot air. Indeed, the thermometer said it was a brisk seventy-two degrees, which is a little disappointing, but certainly a nice change from starting the day at eighty-five. When it is still dark. Which is when we are starting our day these days. Today it was because Charlie woke up at six to go potty and turned on all of the upstairs lights like some kind of crazed drill sergeant. Usually it's because Wes wakes up at 6:15 and tries to crawl into bed with Charlie.

It was so cold I thought I better put on a scarf with my tank top and capris when we went out for breakfast tacos. 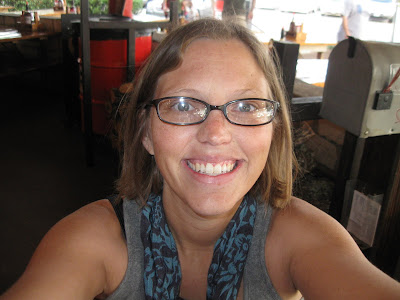 There were goosebumps on my arms. GOOSEBUMPS.

The second half of this week has been GOOD, you guys. Preschool orientation for the kids on Thursday (they loved it and I really like their teachers. Wes wore his backpack the ENTIRE time), then we went out for lunch with friends (which was crazy, as always, but at least I wasn't dealing with the crazy all by myself), then I went up to school to teach while the boys stayed in the campus apartment of a former student who has turned out to be an AWESOME babysitter. When I arrived to pick them up they had the undivided attention of THREE college women who had helped them make origami cranes and fed them homemade cookies.

I have more responsibility this semester (prepping a class and a lab for the spring, A.K.A. Taco's first five months, so I better do a freaking amazing job of preparing) and both kids will be in school three days a week until one. We are all happy to be getting back into a routine and this morning's taste of nice weather to come was icing on the cake. YAY September.
Posted by Becca at 12:20 PM

Routine and weather that is not reminiscent of the climate of hell are both WONDERFUL things. Hooray for September!

the cooler weather makes me so happy, too. Yay for a great babysitter (who makes origami cranes?! Hello!) and happy preschoolers!

It was in the high 60s here, and I made vegetable beef soup and banana bread to celebrate! Love your scarf-- very cute!

Preschool starts next week-- so, so, so ready here :)

Congratulations to us! We made it through the summer!