Charlie started asking me to make "Steaming, Hot, Fresh, Chocolate Chip Bread" a few days ago. Luckily I found a recipe for just the thing in my bread machine owner's manual. We went to the store together and bought all the ingredients, brought them home, put Wes down for a nap, got everything lined up on the counter and then BAM! A missing ingredient! An obscure one that I don't keep on hand (powdered milk?! What, is this the Cold War?!). So we made cookies. It wasn't hard to pacify him. But then he started drawing me pictures of the Steaming, Hot, Fresh, Chocolate Chip Bread. This morning Wes woke up at 4:30 (After partying until nearly midnight last night)(Parenting moment of the century: Waking Ryan up and saying "Would you please hold him for a few minutes because if I have to do this for one more second I'm going to end up in jail)(I'm going to feel like a real jerk when I find out he has an ear infection) and since I had the opportunity to go to the store for bananas and milk as soon as it opened (i.e. before they've made the coffee and breakfast tacos. FAIL), I got the powdered milk and we proceeded with the Steaming, Hot, Fresh, Chocolate Chip Bread after breakfast. And there was much happiness in the Academomia household. 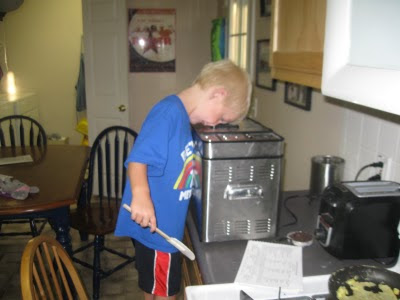 The timer says it takes three-and-a-half hours. I wasn't able to translate that into Charlie. 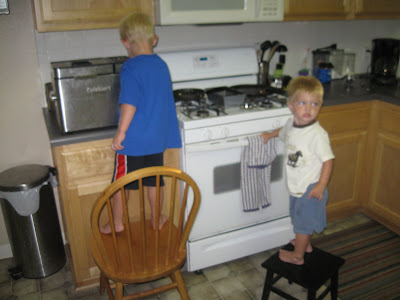 Yes, that is Wes standing on our potty stool, hanging onto the oven for balance. As long as we're being totally honest here, he also snuck a sip of my coffee while I was in the bathroom. Charlie did that once and he never asked again. Wes just came up and asked for another sip. I said no. He was not pleased. I totally get it, Buddy. Maybe next time don't GET UP AT 4:30!!! 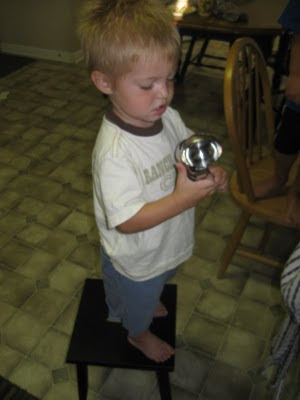 My parents will let me do anything if I leave them alone after waking up at 4:30! 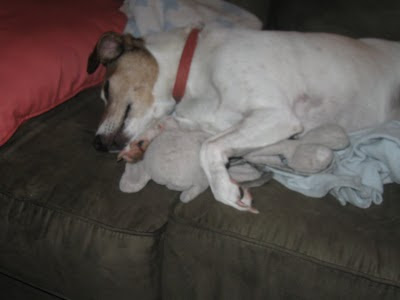 And here's a picture of Rossby cuddled up with both kids' loveys. He may be a grumpy old man, but I think he misses the kids when they're sleeping.
Posted by Becca at 5:51 AM

I love the picture of Rossby, that bread sounds SO YUMMY, and I have the same rug that is under your kitchen sink!!

Rossby, for the win! He's got the sweetest part of that deal, huh?!

Sorry, but the picture of Charlie cramming his face over the top of the bread machine is HILARIOUS. I love his enthusiasm for steam, hot, fresh, chocolate chip bread. Also? His enthusiasm for modifiers.

Where did Charlie get the idea for the bread?

What a night...those are terrible!!