Since we visited the Air and Space Museum earlier this summer, space has been on Charlie's mind. When we reached the limits of my ability to explain things, we trooped over to the library to look for a few books on the subject. After a brief search through the children's section, we managed to find only one book. 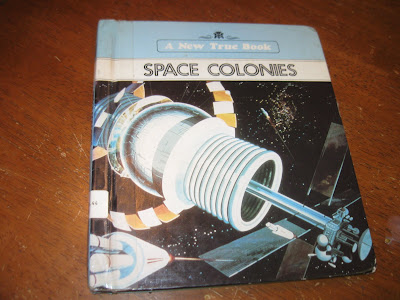 Despite my misgivings about it's scientific value, Charlie would not let it go, so we checked it out (along with some others we found in the "juniors" section, including a particularly interesting one about black holes, because nothing says "sweet dreams" like distortions in the fabric of space and time) and then I hid it in the laundry room as soon as we got home and he wasn't paying attention.

Lucky for you, I was able to renew it! TWICE! Can you believe no one had placed it on hold? I mean, what ARE kids reading these days, anyway?

I came across it the other day and gave it a second look. This is the first page. When I read it I thought that maybe I was being a little bit of a snob in mocking the book so harshly. I mean, nothing on this page is particularly offensive. A tranquil fall landscape, some Pilgrims sitting by a fire. A factual anecdote to illustrate the meaning of the word "colony." 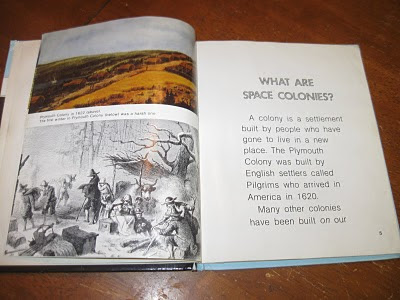 But the next chapter is where they drop the bomb. Why Build Colonies in Space asks the chapter title? Because our planet is headed for IMMINENT RUIN. We will soon have so many people that there won't be enough room for everyone. Naturally, the most practical solution is to encourage some people to LIVE IN SPACE. The book does not detail what kind of incentives would be offered to those willing to leave. Lower taxes, maybe? It also does not mention that even if a space colony big enough to house the entire population of Rhode Island (1,053,209) could be constructed, it would only remove 0.01% of the population from the earth. How many people live in the International Space Station? Like eight?

The second part of the chapter is more contemporary and discusses our limited natural energy resources. I can get behind that, but instead of arguing for the development of renewable energy the book suggests we MINE THINGS ON OTHER PLANETS. It then correctly points out that there is endless solar energy available in space. Because constructing a solar power plant and housing it's hundreds of employees IN SPACE is clearly a better first step than attempting the same on our planet. 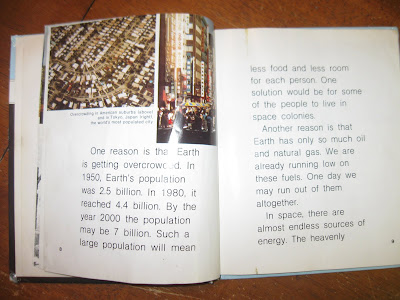 The moon: a good source of aluminum and titanium, conveniently out of reach of the pesky EPA and MMS, and only really visible to most people on earth about half the days of every month. WIN! 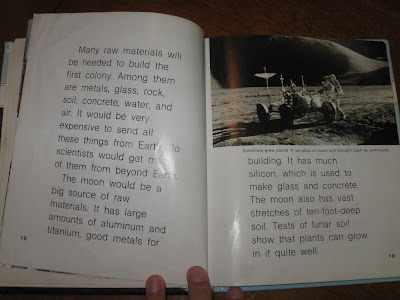 The next few chapters discuss the construction of the space colony and what life might be like were you lucky enough to live in one (and by lucky I mean, no more arguments about whose family you will be spending Christmas with. I mean, SORRY! I LIVE IN SPACE NOW!). Apparently life would be quite ordinary. There would be houses, churches, places to work, schools, and parks. How Utopian! I would like to have seen a chapter called "What Your Atmosphere Does for You," but I don't think Texas sized asteroids and dangerous UV radiation have much place in a children's book.

And now that you are all ready to sign up for the adventure of a lifetime, you might be wondering when the first group of residents will be lifting off. Well have I got some good news for you! According to this page, it will be happening THIS YEAR. 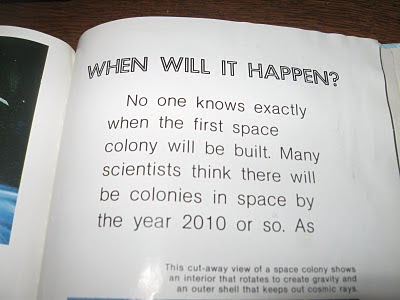 And then it closes with something I like to call "The Most Ironically Named Chapter of All Time." 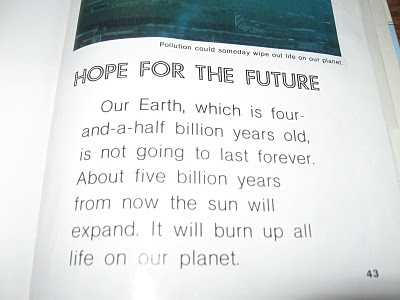 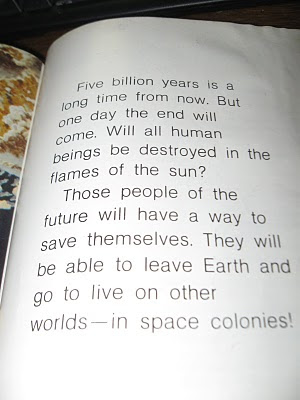 I am 38 years old and I'M going to have nightmares tonight!

although I have to say the space colony excuse for getting out of family holidays IS compelling...

Maybe it is time for the library to put that on the fiction shelf...
(in the comedy section)

Hahaha! 2010! We're all zooming back and forth to Earth, visiting our friends and family in the space colonies.

Wonder if you can find a kids' book about Y2K next? LOL.

Oh my god. I'm at my grandparents' lake cabin Wisconsin with no internet, reading this on my blackberry in the dark while everyone is asleep and am shaking with laughter (and a bit of horror too). I can't believe that book was ever published, much left kept in the kid section for 25 years! Hilarious and awful and fantastic all at the same time.

That is absolutely awesome.

And then...the world exploded. The End.

I'd be curious to see what else has been written by the same author. My guess is not much about science or space.

lol. That is so horrifying! I developed a huge fear of black holes in fourth grade when a classmate working on a project on black holes informed me that black holes are created when stars burn out become vacuums and the sun was a star and therefore would burn out and suck up the earth and we would have no oxygen and die. (Interestingly enough, I later dated that same classmate when we were both in college. It ended badly.) Anyway, good luck fostering interest in space without the terror of the earth burning up and/or getting sucked into a black hole.

May I recommend other books you might be able to blog about:
1. The trouble with dragons

and on a less related note
2. Groundhog weather school

Hilarious! And you know what's even weirder? On my 2010 calendar, I have written "Live In Space Colony"!!!!

Aaahhh hahahahaha!!! Oh, oh I am laughing so hard!! This book is a gem!! Surely if the Sun dies, we'll all be safe on the moon. You know, the moon that is still pretty much the exact same proximity to the Sun.
Actually I was really into space when I was Charlie's age too (eerily close to the year this book was published). I really did believe that by 2010 we would be living in space. I feel a little robbed.
-gm

Sarah stole the words right out of my mouth. That and "Wow"...not the good "Wow," of course!

Oh my gosh-- this is the best book ever. I miss the Cold War so much.

This is exactly why I had nightmares every night until I was 26. Because THIS is what was on the shelves at our library, too.

seriously, I came back to see if you had a new post, but you didn't so I re-read this one and laughed just as hard this time. LOL

I read it outloud to Husband and we almost woke the kid from laughing so hard. Best post ever.

Er what do you think the ISS is but a permanent settlement in space. Baby steps...