After yesterday's disastrous afternoon (summary: Wes took a nap. A LONG nap. We had no food. We couldn't leave to go get any. We were very bored. The children revolted. Ryan came home. I left to get myself some Chinese food then returned to eat it while watching "Sideways" on Netflix BY MY DAMN SELF) I knew something needed to change or this was going to be a LONG summer.

So this morning, when we still didn't have any food (milk, most importantly, Wes was very annoyed by our ignoring his increasingly shrill requests for MIK! MIK!!!! MIIIIKKKKK!), I decided we would start our day at Panera. How can you not be happy while eating something called a "muffie?"

While we were there, I brainstormed some ways to add structure to our day. Structure usually provided by Ms. Sunshine, that magician who taught Charlie's preschool class, which ENDED YESTERDAY. 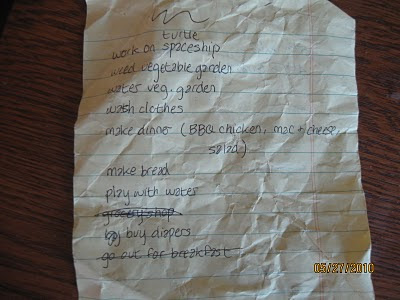 I'm feeling pretty good about it. Of course it's only 10:40, which leaves us with seven hours and twenty minutes to fill before dinner. And Charlie has interrupted his "work on Turtle Spaceship" job fourteen times to interrupt me while I was writing this. But we have tons of snack food and the pool will be open in the afternoon. I'm sure those three short months between now and September seventh are going to fly right by.
Posted by Becca at 8:22 AM

Summer camp? Every Vacation Bible School that South has to offer?

You'll make it! And you might even love it!

I hear ya, sister. My kids' school ends tomorrow. Doesn't that seem a bit early? I think I just might have to copy your list.

I am getting a pool membership ASAP.

I find it so odd that schools let out before Memorial Day! We go until June 11th and then summer camp starts a week after that (and by "summer camp", I mean regular school, just 3 days a week instead of 5)

To-do lists are a good idea!! So are deep breaths! You'll get through it!

I had that same day yesterday! No food in the house, KayTar was home sick, I was booooored and cranky. As much as I get burnt out by the end of semester, a little free time is all it takes to make me miss it! Evidently I'm the one who needs structure around here!

Between VBS for the kids, scouting events and basketball for BubTar, arts camp for KayTar, cheap movies at the theater, trig and precal for me, and swimming at my mom's...we should make it through summer okay.

You make me laugh and realize that real life is damn funny. When one doesn't sugar coat it....

I guess this is on benefit of not doing preschool - you have to plan events for sanity year long so when summer rolls around, you are old hat. And there tend to be more things in the summer, so we are good. Lots of trips to the sprayground are in our future!

A long nap. Yes. Those were the days. Having a kid who slept consistently and for long periods of time was what saved me, back in the day. What REALLY messed with my day was a kid who would nap irregularly. Three days in fitful starts and then one day--out of the blue--for four solid hours. I never knew whether to count on it or not.