I need a weekend to recover from the weekend!

Saturday morning we woke up to a river flowing through our back yard. It was coming from our neighbor's yard, under our back fence, under the swings, pooling against the porch (up to my ankles there), and then split off to flow around both sides of the house, through the front yard, and into the street. 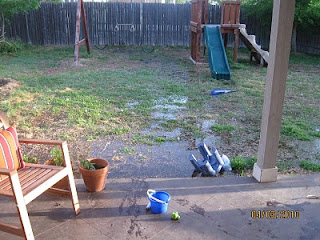 My first reaction was the terribly mature "We're not going to be able to have my dad's birthday party out there!" Then I sloshed out there, climbed up into the fort, and tried to see the source of the water. Then I stalked back inside and asked Ryan to go tell the neighbors to fix it while I got the coffeemaker going. Ryan glared at me and said "Poor neighbor! Something is wrong with their pipes!" then left to knock on our new neighbor's door at 7:30 on Saturday morning. I saw their heads moving around on the other side of the fence for a few minutes and then Ryan came home to tell me that the water was coming straight up out of the ground.

SUPER! I thought. All this yard work and now our house is going to disappear into a limestone cave.

The neighbor came over to ask Ryan for help in stopping the water, so Ryan gathered some tools and left again. A few minutes later I noticed the river was slowing down. Ryan came home to a hero's welcome. 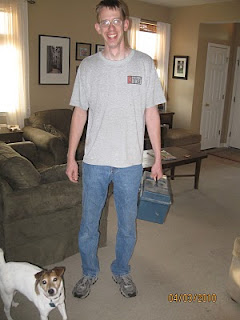 Later Charlie told Ryan's parents "Papa is a HERO. He fixed the water! When I get bigger and become a Papa I will be a hero too!" When we got home from Charlie's gym class the water was all gone. The yard had dried up enough to walk on by mid-afternoon and the whole family happily spent the whole day out on the porch.

Except for me, because I was doing a little cooking.

I made a birthday cake, 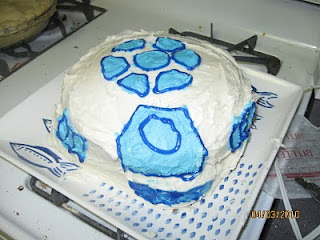 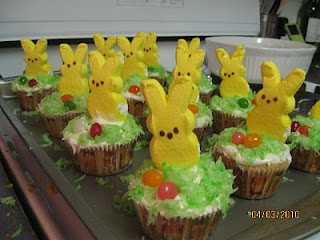 a cheesecake that outgrew its pan in the oven, 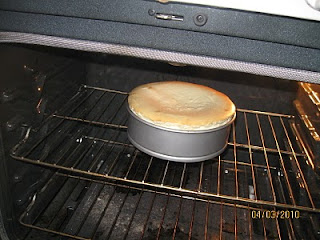 an apple pie, five pounds of cilantro-lime sweet potatoes, six pounds of roasted chicken breasts with rosemary and kosher salt, a breakfast strata, and a cucumber, tomato, and onion salad. Spending all day cooking from scratch with the windows open and music on, happy little barefoot kids running in from the back yard to grab a popsicle or a glass of water before zipping back out again? It was heaven.

Saturday night we had a birthday party for my dad on our porch (freshly cleaned by Ryan and his dad of the fourteen empty compost bags, plastic pots in varying sizes, Radio Flyer wagon full of extra dirt, toy-stravaganza, and baby pool full of rotting weeds that smelled like a swamp). No one left hungry or wanting for sugary icing. By the time the last guest left we had lit a candle for the outside table, added a camping lantern when that wasn't enough light, Wes's eyes were getting heavier and heavier and the sounds of my teenage cousins (and Charlie) cheering for the basketball game were wafting out the windows of the house.

And that was only Saturday! More about Sunday later, like after I find a way to condense the three-minute video we took of Wes falling asleep in his macaroni and cheese at my aunt and uncle's house.
Posted by Becca at 6:10 PM

I am so impressed -- both by your baking and Ryan's heroics; although really, and no offensive to Ryan, but your baking wins. I love the cupcakes - so cute! And Happy Birthday to your dad :)

crazy water pipe fiasco aside (and, btw, yay, Ryan! It's got to feel awesome to be called a hero by your little one!), Saturday sounds LOVELY! Those cupcakes are adorable (what did you use for the grass?), and please post your sweet potato recipe!

I've said it before & I'll say it again, I wish we were neighbors!

I want the sweet potato recipe too!

And man, we could have used Ryan's skills last summer when we flooded! The stupid water kept going long after we woke up and closed the window.

Are those peep bunnies on the cupcakes? So cute!!

Hmm...all that food sounds fantastic! Glad you had a great weekend!

Oh, I love a cake that outgrows its pan. YUM!

The water thing happened to us when our water main broke-- only it came out of the cement, which was creepy but less messy!

I wish I loved cooking...you make it sound enjoyable! LOL. Sounds like a great Saturday...once Ryan saved the day with the pipes!

Cilantro-lime sweet potatoes sound intruiging and yummy - I echo the request for the recipe!

Glad the weekend was wonderful and not interrupted at all by water woes. Go, Ryan!

Sounds like a busy weekend! I am impressed with the amount of cooking you did.