Future hero of the people?

I have to believe that someday this will be a good thing. The stubbornness. The tantrums. The screaming and the head banging and the whines for "MAAAMAAAA" every time I'm out of sight (i.e. in the bathroom).

Wes asked me for something to drink this morning and I absentmindedly gave him a cup of water, which he started pouring on the floor after I handed it to him. I told him "No." He ran into the living room and smacked his forehead so hard on the corner of the couch that an angry purple two-inch-long bruise instantly sprang out of his skin.

Give me water when I want milk? I'll give myself a concussion. So THERE!

I handed him to Ryan this morning so I could take a shower. He screamed for me the whole time I was in there. It was endearing the first day he did this. Three weeks ago. Now it is incredibly tiresome. I would like to take a shower, run to the store, read a book, eat chocolate chips in the pantry guilt free, and Ryan would like to not be treated like he is kidnapping his own child from the Walmart parking lot.

So, when he is slamming his fist on the lectern one day, standing strong for the Public Option or campaign finance reform, or he's on the phone with the Mayo Clinic refusing to hang up before they find a spot for his patient, or he's insisting to a parole officer that he can personally vouch that his student is going to turn his life around, or if he's a corporate officer, blowing the whistle on his company because they committed fraud, I will remember what an incredibly stubborn toddler he was. And hopefully I will laugh. Unlike today, when I am counting the minutes until his morning nap. 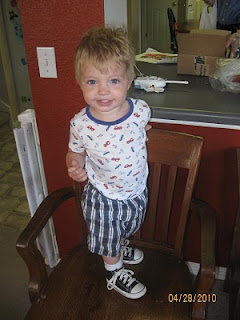 Will not take no for an answer. Or change out of his pajama top.
Posted by Becca at 6:14 AM

Being adorable will come in handy, too. (HE IS ADORABLE!!!)

I agree with Rima. He's adorable. We had no terrible toddlerhood with Harry, but we are paying for it now in the late 3's. Jack is a mess at 2-- maybe they'll be easier later?

Dying laughing at the Walmart comment. Jack is currently undergoing a Mommy Panic phase and I am really enjoying it. Like I enjoy a colonoscopy.

"Ryan would like to not be treated like he is kidnapping his own child from the Walmart parking lot." <--- Made me laugh SO MUCH!

When KayTar was little and still used scripting for speech, she used to SCREAM, "HELP! DON'T TAKE ME! IT'S AN EMERGENCY!" any time she got upset in public. Luckily I never got arrested for kidnapping, but we sure stopped going out much!

I hate the cling-to-one-parent-and-only-that-one-parent stage. it is so much easier when you can share the kids :) Hopefully he will grow out of it quickly. I found punishing AJU5 helped get her to go to daddy a little more :)

omg, but look at that face!! What a good way to put the willfulness of a toddler into perspective.

This is awesome. And I feel the need to note that August has the same shoes that Wes is wearing in this picture.