The farming situation may be getting out of hand

It was another afternoon of pure klass at the Academomia household. 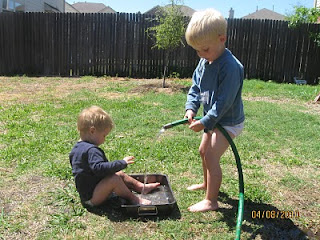 Why yes, that is my roasting pan! Why spend eleven dollars on a huge plastic baby pool when you can find hours of water fun right in your very own pantry?

Actually, the baby pool I want for them won't fit in my car, so I am waiting for the weekend when Ryan can stay with the kids while I roll it home by hand. I sure hope it's not windy. I'm not sure why I don't just buy the small one again, though, because then never use the whole bathtub, preferring to sit practically on top of one another where the kicking and scratching is most convenient.

Also? This afternoon when I checked the pumpkin patch for sprouts I was delighted to see several of these just peeking their way out of the soil: 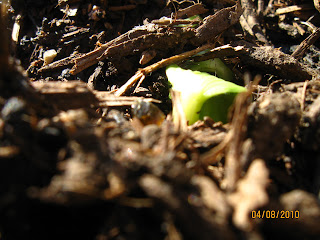 A few hours later I checked them again and they had grown even more! 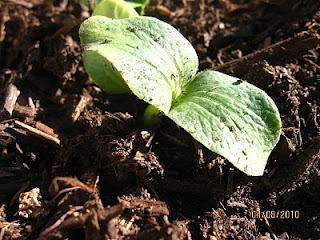 Charlie was pretty excited, but the thing he is most excited about is this: 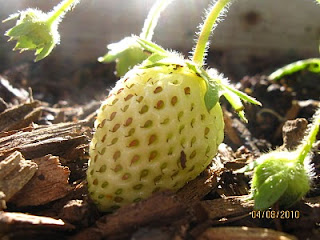 Every time we go in the back yard the first thing he does is check to see if the strawberry is turning red yet so he can eat it. Not that he's wanting for strawberries--I hit a sale at the hippie grocery store and loaded us up--we average a quart a day. He also ate two pounds of grapes today. Wes would eat three Clementines per meal if I let him. This is why I had to start a small farm in my yard. Next summer I'm going to have to till up rows and plant kidney beans, garbanzos, and pintos. Although I don't want to test my marriage vows in that way.

Hmm. Now I really want to try beans in a pot! Like these new additions! 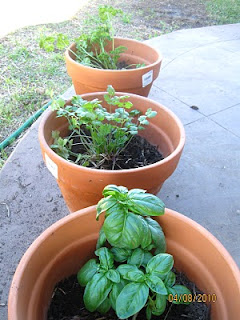 And two zucchini plants because not having them, and the associated possibility of growing another four-pound squash like I did in my first garden, was making me anxious. I also added another tomato plant, because I want to have enough to save for the winter. Because I want to be like Martha Ballard, a late 1700s Massachusetts midwife whose diary is featured in a book Godmother gave me, A Midwife's Tale, by Laura Thatcher Ulrich, who grew food for her family FOR THE WHOLE YEAR in the span of a New England summer. Although she probably wasn't making pico de gallo out of her tomatoes. And also, her kids practically ran the household while she waded through rivers at night in the snow to deliver babies. I will probably never be that cool. 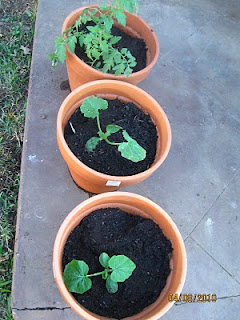 When the kids are playing outside I like to put my chair right in the middle of all those pots and think about salsa. And where I'm going to live after the TEN pumpkin vines that have sprouted take over my house like Jumanji.
Posted by Becca at 8:09 PM

Dude! I know Martha Ballard (well, not personally, obviously!). I took Laurel Thatcher Ulrich's Midwifery & Medicine class at UNH right after she published "A Midwife's Tale." It was an amazing class!!

Your garden looks awesome! I have a ton of things starting to sprout in dixie cups and I have NO clue what to do with them now! GAH!!!

I have said this before about your garden, but man I am jealous!

This post I am jealous of your pumpkin plants (they would not do well in pots, right? I am limited to pots until we get space in a community garden on campus, give it up undergrads!!!) and of your cilantro plant! I made carrot soup tonight for dinner and it was just begging for cilantro so I sent Sam out to cut me some from our herb garden. We have 7 pots of herbs outside. And he came back and said we had none. So I went to look because that couldn't be true. Well, it is. Because someone whose name starts with "S," may or may not have an "a" in the middle, and ends with an "m" decided we needed two basil plants instead of a cilantro. Boo!!

Also, if Rossby is anything like Franklin the Strawberry Thief, he will like strawberries and might get to them before you guys do when they ripen!!

So jealous of all your pretty plants! Mine are still in little pots inside and only a few centimeters tall :( --abby p.s let me know when the salsa is made :)

So cool! We had strawberries when I was a little kid, and it was SO FUN to pick them. We also had lots of fruit trees, which meant delicious baked goods. Yum.

Glad you like the book! And for future reference, I would climb over a toddler to be the first to eat the strawberries and tomatoes off the vine. But then, you have seen me binge eat tomatoes before.
-godmother

Looks like you are doing a great job with the garden. Hopefully the weather will stay decent for you so you can enjoy the fruits of your labor!

I am so jealous of you with the pumpkin plants. I planted 3 and my friend did too & we had a lot of rain & neither of ours survived.I guess they cant stand rain. ACTUALLY either can I.GGMann

Looks like you're starting a nice little farm there! Now you just need a few animals back there.

Have you read "Animal, Vegetable, Miracle" by Barbara Kingsolver? I highly recommend!