After I posted about making the brisket the other day I started thinking about other ways we could incorporate some tradition into our daily life. Besides Pizza Fridays, which are as much a throwing up of my hands after a long week of careful meal planning and budgeting as a tradition.

So! We will now be having a special dinner most Sunday nights that I will be calling "Heritage Night." This week I borrowed from my grandparents' New England upbringing and was determined to make Steamed Brown Bread and Boston Baked Beans. That was all I was going to make, because I am on a meat-free kick, but I thought Ryan would leave me if I didn't cook him some meat soon, so I made hot dogs too. This was keeping with tradition as hot dogs are a common go-along with baked beans, at least as I remember from time spent with my grandparents during the summers. 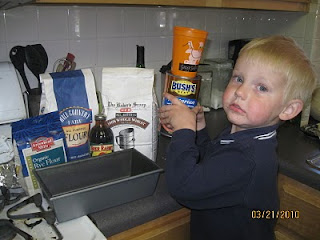 The beans came from a can, but our store doesn't carry the brown bread in a can that I remember having at my grandparents' house (Also, finding "baked beans," and not ranch beans, beans with jalepenos, or black beans, was tricky here in the Lone Star State). I gathered the ingredients for the bread then flipped excitedly to the Steamed Brown Bread recipe in my Moosewood cookbook. I was dismayed when I read (paraphrasing) "Pour batter into two metal coffee cans, wrap tightly in aluminum foil, partially submerge in water in a heavy kettle, then boil for THREE HOURS." OMG.

(1) My yuppy coffee comes in a foil bag, not a can, and if it did come in a can, it would be a plastic can. Not suitable for submersion in boiling water. (2) A kettle? Is that the same as a stock pot? Because that is all I have. (3) THREE HOURS? THREE HOURS? THREE HOURS? No wonder the only form I've had before was in a can!

My first mistake was smelling the molasses. Charlie smelled it first and said it smelled GOOOOOOOD, so I gave it a hearty whiff right out of the bottle and immediately started coughing uncontrollably. With that in mind I mixed up the rest of the ingredients into something that smelled alright, but in my opinion could have used about a cup of sugar. Charlie liked it so much I had to stop him from licking it right out of the bowl before I poured it into the loaf pan.

The beans were heated in a saucepan. Done and done.

Dinner was a moderate success. The bread ended up being pretty good, but not as good as I remember from my grandparents' house. Maybe with butter?

Wes was the true success. He-who-never-eats-dinner-because-all-he-wants-is-scrambled-eggs slurped up his beans and bread and was signing "more" before I could even pick up my fork! He had two healthy portions of each then unsnapped his pants and leaned back in his chair to accommodate his full tummy. Charlie enjoyed it too, but he will eat almost anything. First borns are pleasers who crave approval!

Any suggestions for this week? Something that does not require a kettle?
Posted by Becca at 7:52 AM

As long as you're doing New England, how about clam chowder?

(My) Grandma Mann - your Greatgrandmother - used to make wonderful meat dinners, which are a problem for you - leg of lamb and roast beef. But because she grew up on a ranch in California (now Lotusland in Montecito, we also had avocados and artichokes - with warmed lemon-butter. I always think of her when we have them!

And I remember making Bavarian Cream desert with her - it's a vanilla custard with gelatin with egg whites and whipped cream that divides, with a foamy top and creamy bottom.

I was looking for recipes and none of the ones I found online included the egg whites. So I looked for Grandma's old cookbook, which I guess I gave to my daughter. But Joy of Cooking mentions the possibility of both. I would blend in the egg whites immediately into the custard before cooling, and not use as much whipped cream as the recipe calls for. I don't think we used the whipped cream at all. The recipes I looked at didn't mention that it divides, either, which was the magical part of the whole recipe. I used to get to beat the egg whites with a hand rotary egg beater. And kids can always stir the custard as it cooks over low heat.

I keep finding recipes for Bavarian Cream with cornstarch - which isn't necessary if you make a good eggy custard - and ice-cream, which I suppose speeds up the cooling process, but is definitely NOT in any original recipe!

Becca--you should load up your father's car when it heads back to Texas in the fall with canned brown bread. That's what the NC Paulsens do!minguri

Definitely do Jewish heritage night. You could dust off the brisket again and try matzoh ball soup and kugel and blintzes and latkes (okay, so those things don't go together AT ALL, but still yum)

You could definitely through in a few nights of their "heritage" - the Southwest/Tex-Mex variety. Or, you could always just make one night of the week Tex-Mex night. We are pizza Friday people too most weeks for the same reason. But then again, we eat the same things most weeks. I wish I was more adventurous...

Brown bread in a can is the best! Ah, New England.

I love the idea of "heritage night". Am SO going to rip that off from you. (except that would mean I have to consistently cook meals for my family and that's just crazy talk--but I'll try!)