I got up a couple of hours early this morning to drive my friend Labmama to the airport. What followed was an amusing comedy of errors where we both got COMPLETELY LOST in long-term parking trying to find her husband's car so we could get one of the car seats out of it. After the second time we dead-ended in a very Homeland Security Code Orange looking place she said "Forget it. I can get another car seat for $50." I thought it was kind of funny that we kept driving by the place where they gas up the planes, for example, but I kept it to myself because LM was a little stressed by the whole missing a plane, flying into the (second) Great Blizzard of 2010 possibility. All was well in the end, though. They made their flight and I stopped on the way home to buy breakfast tacos for the family (courtesy of LM) then attempted to get a half hour nap in before it was time for Ryan to go to work. Ryan set Charlie up at the table with his bean and egg taco then came upstairs to take a shower. As soon as he turned on the water Charlie started screaming up the stairs that he needed help opening the back door so Rossby could go potty.

Anyway, all this to say that I am rather tired and think that if I have one more cup of coffee, the next time someone makes a sudden noise, my head might lift right off my body like an Apollo rocket. And there is no more grating sound than Legos crashing against the side of a Rubbermaid tub, am I right? Yay for everyone!

Good news, though, we are almost done with the making of the Valentines for Charlie's class party, which is tomorrow. I have not yet finished (or begun) the eight heart shaped sugar cookies I promised to bring. I also have a whole stack of labs to grade tonight. Freaking awesome planning if you ask me!

For Charlie's cards we (I) cut hearts out of pretty pink fabric (chosen by Charlie, lover of all things pink) with pinking shears and then glued them to construction paper cards. 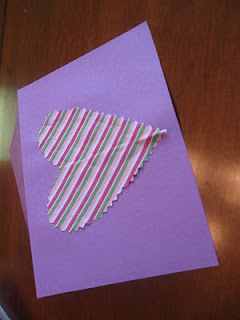 Then we (I) wrote a heartfelt message in each one and Charlie finished them off with a personal message in sparkly glitter glue (that's the wiggly line under the word "day." He made a freaking awesome smiley face on his teacher's card, though. He's so going to be "that kid."). 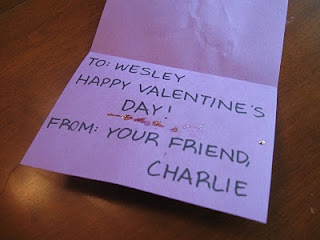 And finally, apropos of nothing, here is a picture of the neat sunrise we had the other day (that I got to watch courtesy of Charlie's early-morning potty sing-a-long). That vertical shaft of light was much brighter a few minutes before I took the picture but I was too busy staring at it with my mouth open, clutching my bathrobe around my body and muttering about the cold then to think maybe I should get my camera and put a picture of it on my blog so all my meteorology friends can tell me what caused it. It was like an upside down crepuscular ray. Way cool. 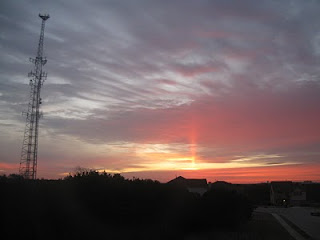 Actually, what you took a picture of is a sun pillar. Great shot though and at least y'all have seen the sun recently...unlike back here in the Hub.

Very crafty with the Valentines! I am impressed.

Now get some sleep after grading... hopefully not during...

I know that over-caffeinated feeling...when I get there, though, I usually have an ocular migraine. Being temporarily blind IS a good signal I should step away from the coffee, though. LOL.