We should have fun more often!

My dad is an awesome nanny. The kids love him. They seem to have a lot of fun because usually when I open the door, expecting to be greeted by happy screaming and hugs all around, this is what I see instead: 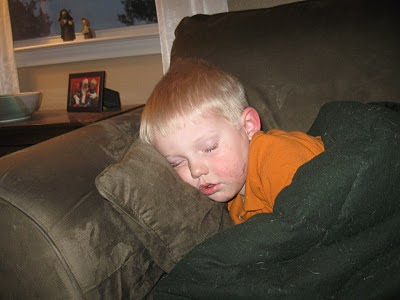 Yesterday was one of those days. They both woke up from naps around five-ish, which meant I was facing AT LEAST two and a half hours of out-of-sorts, bored children before I could even consider starting bedtime. So instead of dealing with that crazy we loaded up the bikes and drove to my school to let the kids burn off some energy on the endless sidewalks on campus.

Also? We took a lot of weird blurry pictures. And also? It was seventy degrees yesterday until about ten when it dropped to sixty five. Don't hate me.

Whenever girls passed by Wes he stopped, turned, held up a hand and yelled "HAHHHH" (his little Texan version of "Hi" or "Hello ladies!"). Only did that for the girls, interestingly. 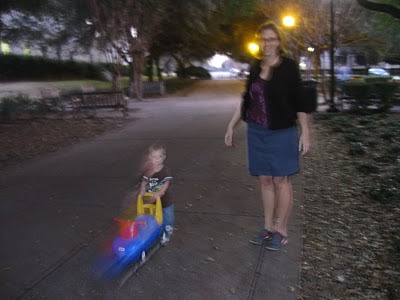 Here is one in a series of pictures of Charlie's back. Later we found an available community bike and were able to keep up with him. Before that? Lots of running and yelling "Stop at the lamp post/bushes/flag pole and wait for me!" He remarked repeatedly "Isn't this a SPECIAL TREAT?!" 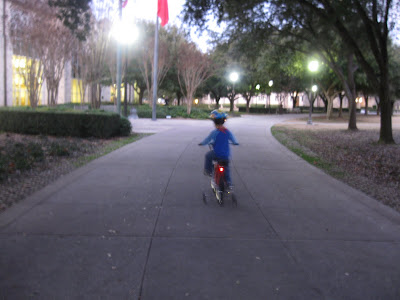 Wes took it off-road when the sidewalk no longer presented a suitable challenge. 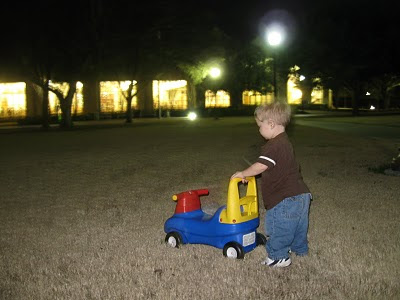 And I tried to use the "night scene" setting on my camera to take some neat pictures of Charlie riding in circles in front of the chapel. You can barely see a Charlie "ghost" near the door of the chapel. Still learning how to use my camera, obv. 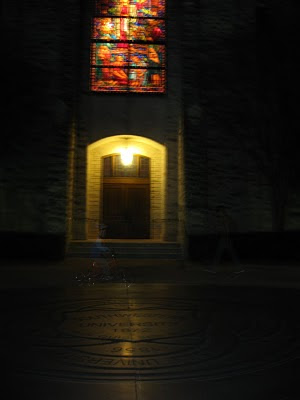 They rode/pushed for more than an hour and then we piled into the car and went out for Mexican food where they ate like recently rescued castaways and we had our first ever real conversation with Wes (Ryan: "Wes, do you like pickles?" Wes: shakes head. Ryan: "Can I have one of your pickles?" Wes: "Yeah."). Charlie topped off the evening by sitting on the public potty singing "Feliz Navidad" for ten lonnnnng minutes (he's on antibiotics.).

As we pulled onto our street Charlie yawned and said "I'm so tired!" Mission accomplished.
Posted by Becca at 7:57 AM

Sounds like a lot of fun. I so miss that place by the way - not being in school but the campus itself!

You are wearing a miniskirt in January. We can no longer be friends.

Hahahaha-- I love "Haaaah," that's what Jack says, too, despite being from WI where he should say "How's it going there?"

Such a good idea to tire them out :)

I love that Wes is already working on the ladies! Precious!

And I love the biking pictures and Wes "off-roading!"

Finally, I am so jealous of your weather. It is what my weather should be!! Instead, we had pouring rain (inches) and 50+ mph winds today and a TORNADO warning just now. During nap time. Screw you, El Nino.

I love that your dad is grooving so well in his duties. It must make your teaching gig that much more enjoyable to know that they are all faring so well.

My dad took the boy to the bouncy house *4* times while he was here. Ah, bliss.

You could totally freak someone out by telling them a story about that chapel being haunted by a preschooler on a bike...and then showing them that photo. LOL.