Get your guns up!

Last night our beloved Red Raiders were playing against Michigan State in the Alamo Bowl. You may have heard a little bit about the controversy surrounding our coach and his ALLEGED mistreatment of one of the players. It has been the subject of many heated discussions in our house this week (we are both TEAM LEACH all the way) and both Ryan and I were ready to just watch some football already.

The game was on The Cable so my sister came over and Ryan and I made a break for our favorite neighborhood place and asked for a seat close to the TV. I had looked forward to a large crowd of red and black with whom to scream at the TV and cheer our boys on, but once the game before ours ended the place cleared out and it was just us and a very nice family who no doubt unnerved by my frequent outbursts (and Ryan's, though he saved most of his enthusiasm for later when he was able to rig up our computer to show the game at home).

It was a little bit of a letdown, having been accustomed to packed sports bars where they play the fight song every time we score and everyone groans in unison when someone blows it. But we did move four-hundred miles away, so what are you going to do? We had a very nice time out by ourselves watching our team.

The place closed at halftime so we went home to relieve my sister and listen to the second half on the radio. But instead, Ryan found a website where you could stream the game live FOR FREE and we were back in business (website not named to protect the criminals, also it had a vaguely pornographic sounding URL).

We moved our love seat over to my desk so we could watch in style. 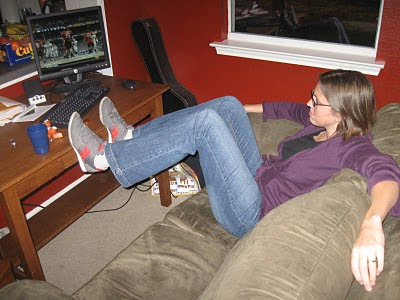 We were so happy we could yell at the TV again. Home sweet home. 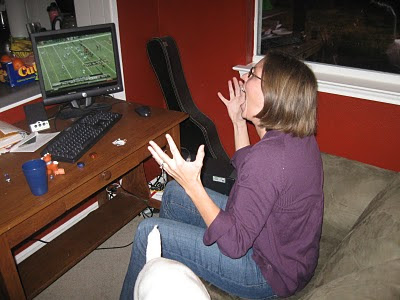 The game ended after midnight, but I only made it to 11:30 before I was fast asleep on the love seat. I had anxiety dreams all night about who won and when I woke up to the gentle screaming of our darling oldest child at 7:00 I shook Ryan awake and asked him who won. "41-31" he said. "WHO. WON." I repeated. "WE. DID." he said with a smile, then ran downstairs to start the coffee.

We all wore red to church. I was going to take a picture, but you know, there was crankiness and misbehavior and it didn't happen. We listened to the fight song in the car and sang along while Charlie yelled "GO TECH GO!" and pumped his little fist in the air. We are so proud of our team!

And now for some amusing pictures!

Charlie puts weird stuff in his bed after we say goodnight. Here we have a large chair cushion, a globe, a Santa rug, and Phent, of course. 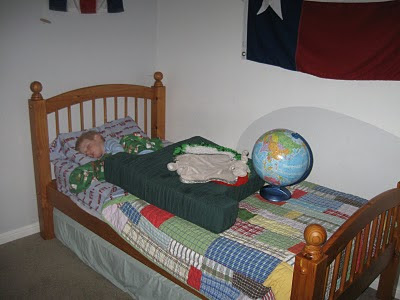 And Wes had like forty-five tantrums in a two-hour period on Thursday. Having been through all of Charlie's shenanigans last week I found Wes's outrage over EVERYTHING to be super funny (how can you not laugh when you tell a kid not to climb on a chair and his head snaps back like a Pez Dispenser before he slowly slithers to the floor screaming?), so I took a picture (then gave him some Tylenol and put him to bed, because what the hell, dude?). 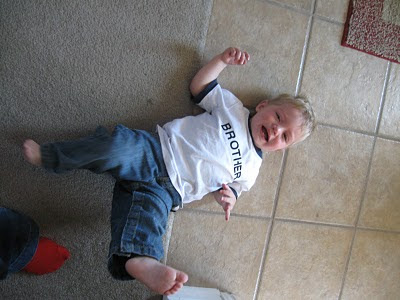 Oh my goodness that picture of Charlie cracked me UP-- how funny. Different stuff every night?

Love the baby tantrums, too, and they are funny as heck compared to the "real thing"

I love how you guys love football-- I know Ben wishes I were passionate about something besides Wimbeldon and ice skating.

I am assuming the t-shirt has no meaning on Wes (other than he is the little brother)...
And remember you moved to another BIG college town - most people are afraid to wear red and black there half the time :) But red and black are definitely not as hated as maroon...

I cannot really relate to the first part of this post as we are total non-sportsmen around here, but I'm glad you got to watch your game and that you won!

I love that photo of Charlie! Hilarity!

I can relate to Charlie, the bed can be a storage place too, no? Les doesn't agree though.