Did not know I could cook something I liked this much

Labmama sent me this recipe yesterday and the picture alone made me want to try it. We killed a good forty-five minutes getting the ingredients at the store because they are remodeling and today was the day they had five huge men using pick-axes to dig a trench in the floor of what used to be the coffee department. I don't think I have to tell you the horror I felt when I went into the store for the first time (New Year's Day. in the morning) and the coffee department had mysteriously vanished. I found it near the beer and wine. Anyway. Charlie wanted to watch the construction workers and it is thirty-degrees outside so we had absolutely nothing better to do, so watch we did. For an awkwardly long time.

This is a great recipe if you like to chop vegetables, and I do.

This is my favorite part of chopping: 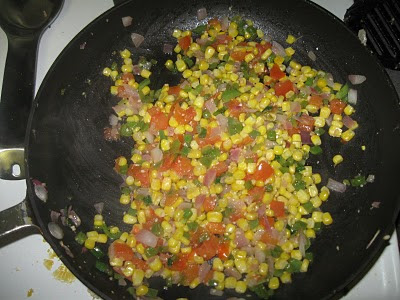 don't you want to eat it RIGHT NOW? When I make jambalaya I have to stop myself from putting my head right into the stock pot with the onions, peppers, celery, sausage, and chicken because it smells SO GOOD.

So, the ingredients are (from Yum-O) My comments in italics.:

1. Drizzle the chicken with olive oil then season with salt and pepper, then with cumin and chili powder, roast in 400F oven until internal temperature reaches 165F. This can be done WAY in advance. Highly recommend. Especially since mine took twice as long to cook as I anticipated. When the chicken is cool enough to handle, remove it from the bone. I also shredded it into bite sized pieces.

2. Chop the hell outta some veggies. I chopped them individually and put them in separate ramekins because it looked very pretty on my counter and also made it easy to add ingredients as they were called for.

3. Saute the garlic, pepper, and onion together until almost tender. Add the corn and cook for 3-4 minutes more. And then forget what you are doing, crank up the music, and have a dance party in the kitchen with your children. Sail right past almost tender into translucent blobs of mush.

(I can see you dancing! Don't forget about your corn relish!)

4. Top flatbread with olive oil and spices, broil or toast until crispy. Mine did not get crispy before they smelled like they were burning. I know! How does that happen?! Maybe it is time to clean my oven?

5. Top flatbread with chicken, shredded cheese, lettuce, and corn mixture, serve warm. Again, I forgot the lettuce. It would have looked pretty, but I don't think I was really missing out because it was delicious just the way it was. Maybe for company? 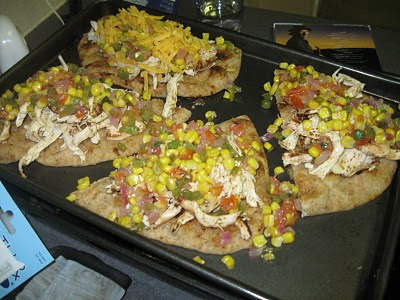 Ryan proclaimed me best wife in the universe, Charlie ate three bites, and Wes only ate the naan, which is about what I was expecting given he ate about seventy-five ounces of shredded cheese while I was cooking.
Posted by Becca at 5:14 PM

You and the kids need your own cooking show. Love this! I wish you lived next door.

OMGah-- I am going to make that next week-- delicious!

KayTar gets SO embarrassed when I sing that song. It is HILARIOUS! She says, "Maybe you should just sing this one in your mind, Mom."