As always, Christmas started Christmas Eve at my aunt's home for the traditional Polish Christmas Eve supper (which we had at lunchtime to accomodate the little ones) called "Wigilia." Charlie ate his whole bowl of borscht before the rest of us made our way to the table then finished off Wes's leftovers and a roll before disappearing until the pierogi course. 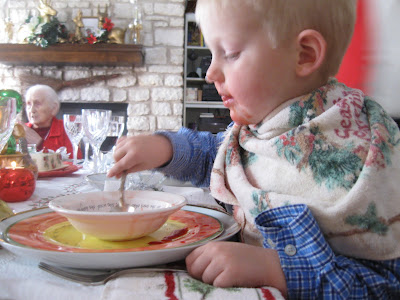 Next we went to the three o'clock children's service at our church, which they call "Bedlam in Bethlehem" because the kids get to participate in the service by wearing a hat (making them either a shepherd, king, or angel) and standing near the front and acting out the nativity. Charlie was a king, but was so tired and stressed out by all the excitement he didn't make it all the way to Bethlehem to greet the newborn king. Poor kiddo.

After church both boys took a nap until six, which gave them plenty of energy to stay awake until eleven, singing and yelling from their beds about Santa and Mary and Joseph coming to their house. He was a little confused.

We woke up to Charlie screaming about Santa, who had left his and Wes's stocking in the hallway outside their rooms. Santa was very generous with the treats. 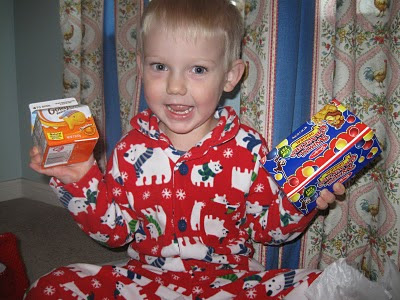 Wes was not a fan of stocking time. After a few matchbox cars and a box of animal crackers he became overwhelmed and dissolved into a puddle of tears. Poor little kid, all he wanted was some new pants and a banana. 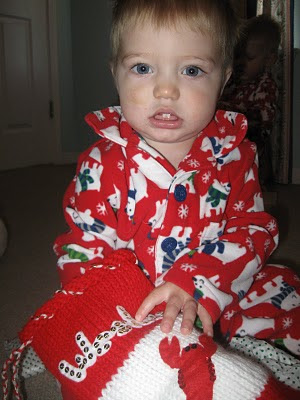 Facial bruising courtesy of the windowsill in our foyer.

He was pretty excited to see his new stacking game though. This one is made of wood for the baby who has everything. 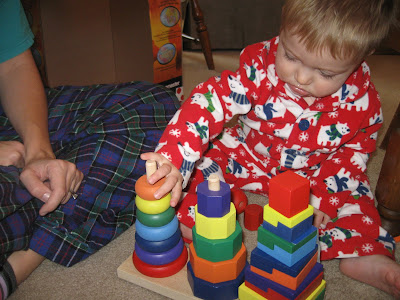 Fun for all ages! This brief moment of brotherly cooperation brought to you by Christmas morning adrenaline. Also note the light-up shoes I found at a consignment store that Charlie WILL NOT take off. WILL NOT. Also? He makes them light up by stomping. It's adorable, the stomping. 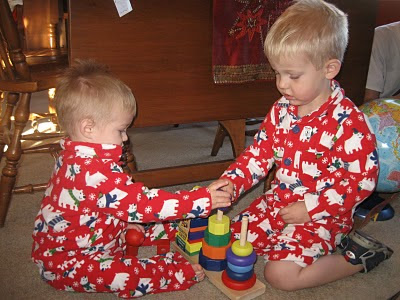 Several times this morning I thought "I should really wear something nicer than this ice cream store tshirt my sister found on the beach. I bet I'm going to be in a lot of pictures. Nah!"

Charlie: "IT'S A GARBAGE TRUCK! IT HONKS FOR ME, BEEP BEEP! THANK YOU GARBAGE MAN!" 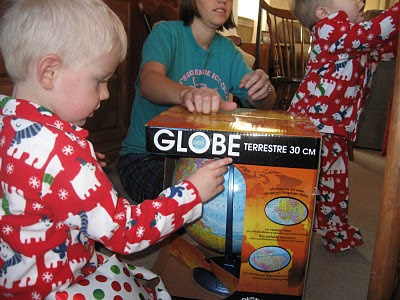 And then, oh shoot! The turkey, it is still crunchy! Into the sink with you while I peel fourteen pounds of potatoes. 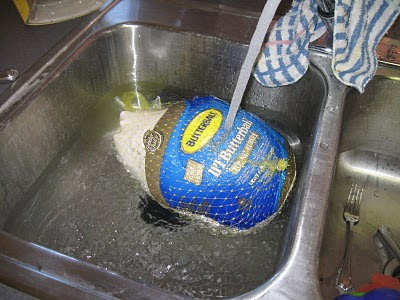 There are no more pictures of the dinner prep. Because I was, you know, cooking dinner for seventeen people. The turkey came out great save one teeny mishap at the end with the thermometer telling us the turkey was ready and then Ryan and my dad squinting at it as they carved it and ultimately declaring it "a little bit rare" and then, NO MATTER, let's just MICROWAVE IT for a couple of minutes! And the green beans almondine were easy and good and my uncle mashed the potatoes for me and the rum cake was practically illegal it was so good. The kids all had cookies for dinner I think, but it didn't matter because they spent the whole evening watching basketball and roughhousing upstairs in our new game room (which Ryan created by moving our guest bed out of our ironing nook and into our bedroom, creating a pleasing Ramada Inn kind of feel with the two queen sized beds in one room).

During the ten minutes I actually saw them, the cousins sat at the kitchen table. They got paper plates and plastic forks wrapped in Halloween napkins left over from Charlie's birthday party. And outdoor furniture for an extra touch of klass. 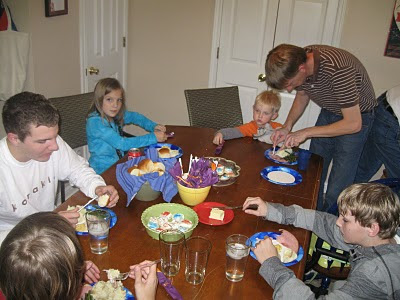 The adult table, beautifully decorated by Ryan. Perfect tablecloth provided by Labmama, table runner by my aunt, all festive centerpiece-ery provided by my mom. Thank you all for saving me a painful visit to Hobby Lobby. 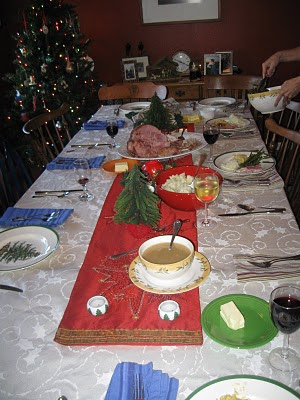 The table wasn't long enough for ten, even with both leaves in, so Ryan pushed my desk up to one end and covered it with the table cloth and VOILA! A comfortable table for ten, with convenient access to pens and camera cables and calculators at one end.

We all had a good time and one of my guests even said she would pass along a good report to my grandma. High praise, indeed (but she has probably never had to microwave a turkey).
Posted by Becca at 8:43 PM

I cannot believe you hosted for 17 people! I had 6 adults and two preschoolers and it took every. single ounce of my sanity to pull it off! I'm so impressed!

And those jammies are freaking adorable!!!

Beautiful! And very engineer-y of you on the table and game room solution (LOL @ Ramada). Is that Christmas Spode on your table? Love it. Th boys are adorable as usual, and it looks like you had a very merry Christmas :)

I love the whole run down, especially the part about Santa, Mary and Joseph coming to the house. Very Merry Christmas to you all and Congrats on what sounded like a very successful dinner!

That all looks so fun! We have the same ring stacker and Charlie loves it.

Sounds like a good Christmas too me1 I cracked up at the pencil-availability at the table comment.