Some weeks ago I took a picture of my kids sitting on the couch to show you just how seriously we take those AAP recommendations re: children under two and television watching. But instead of noticing those two little cutiepies on the couch, I noticed our awkwardly large and blank wall and the blinding light coming through the wooden shades that came with the house.

Here is the picture, which also documents a rare uncluttered moment for my living room. Probably because the TV is on and supressing any brain impulse that may have otherwise spurred the movement of a muscle group other than those that move the eyes. Which, believe me, after all those various trips to Pediatrician Man to get innoculated against flu, MMR, etc, was truly the only way to get anything done around here. Like cooking dinner or luxuriating in the bathroom for forty-five uninterrupted seconds. 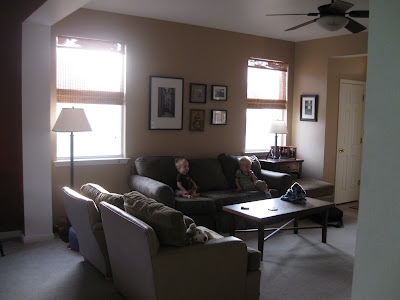 Curtains, I thought! We need curtains! Choosing a color and style was tricky, though, because our living room is open to the dining room, which is painted red and has black toile valances. Because of my rather specific needs, both stylistic and budgetary, I turned, naturally, to Craigslist.

I typed in "curtains" and the first listing I came across was exactly what I needed. Two curtain rods, four cream colored satin-looking (actually polyester, bien sur) panels, and four giant heavy metal things designed to hold back the curtains but which will not be used due to their potential function as weapons. All for $30! I emailed the seller and arranged a meeting. She replied "If you take everything, I'll let you have them for $20." Although the seller should probably never work for the State Department, I had to admire her negotiating style. Especially when she revealed that she originally bought everything for $200.

I brought everything home and stashed Wes in his crib for a nap, then ripped open the bag to discover there was no hardware provided to hang the curtain rods. GAH! Disappointed but undeterred I found some screws in the garage and cleverly rested the curtain rods on them then covered them up with the curtains. You totally can't tell that we are one step away from thumbtacking sheets to the windows like a couple of broke college students.

Then I rearranged the furniture because I felt like continuing with my "Design on a Dime" morning fun.

When Charlie returned from school he walked slowly into the room and said "It looks so pretty, Mama!"

And what more can you really ask than the approval of a three year-old, am I right? 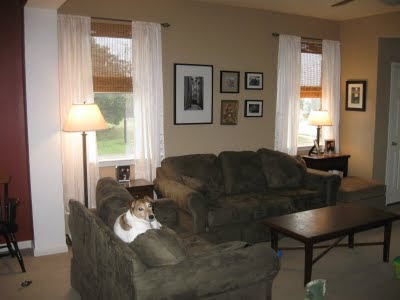 I think it is a huge improvement, and moving the ironically named "loveseat" to the same side of the room as the couch means that now each of us has our own couch to sit on while we watch Law and Order. It doesn't get any better than that, folks.

love it-- it does look so pretty.

Looks great! Gotta say, I was confused when you said that you moved some furniture, because the before and after looked similar! But I finally got it :)

I surely agree with Charlie. He is an accurate critic!
GGMann

That last line cracked me up - we, after eight years of sharing a couch for TV watching - now finally have two couches in the den and you're right - you can't beat having your own couch on which to watch prime time (in our case, its NCIS)

I love the curtains! And I'm amazed you found something so perfect so quickly on craigslist - you need to find a way to monetize those craigslist skills you have!

Looks awesome! We need curtains, but they never make it to the top of the list.