As you know, we don't have cable. This began as a matter of economics, two grad school "salaries" + one baby = you get the idea--and then once we graduated to adulthood two years ago became more of a source of smug pride slash competition slash staring contest between me and Ryan to see how long we could make it without getting cable. I sort of thought "the switch" would be the impetus we needed to take the $25/month plunge, but we left that in the dust months ago.

(When we stay in hotels we become total addicts, by the way, lest you actually believe what I said about "not watching that much TV." When I was eight weeks pregnant with Charlie we went to a conference in Houston together and spent HOURS in our disgusting hotel room watching a Mythbusters marathon. This was a hotel room in which we had to bail out the bathtub into the toilet after showering because the drain simply did not work. Disgusting. And yet.)

Our downstairs TV, which I bought shortly before Ryan graduated because our old one stopped getting NBC and I wanted to see the ER season premiere (and LIKE HELL you are going to leave me home by myself with a baby and no TV while you work in your lab until god knows what time of night), has a digital tuner so we were a little lazy about getting a converter box for the upstairs TV. It's been a giant paperweight ever since we moved in, serving only as a target for mumbled insults and swear words as I think of all the showers I could have taken during the PBS morning line-up.

Today, my dad told me we could use an extra converter box that he had. I brought it home tonight and we set it up just in the nick of time so I could watch Jay IN MY BED. It was everything I thought it could be. (Except that I still had to drag myself back downstairs because of NaBloPoMo.)

They say you shouldn't have a TV in your bedroom because it takes away from the romantic atmosphere. I don't think that's the case, do you? What could possibly be un-romantic about this little arrangement (and no I'm not talking about the framed picture of me and our department chair at graduation)? 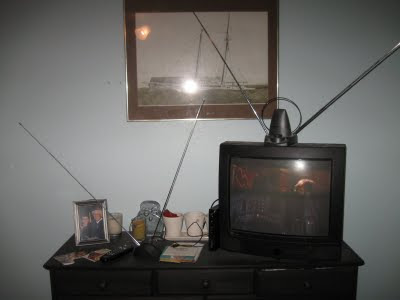 On a totally unrelated note, I love your dresser.

Cable might make things LESS romantic, actually, with it's polarizing choices. We can either watch something Ben likes (an old freaking movie that we've seen 64 times because HBO plays the SAME movies for like 6 weeks at a time) or something I like (HGTV!!), and the other person just sulks.

We've fallen asleep to my Golden Girls DVDs for months. Now THAT is romance :)

We are TV junkies. If we didn't have cable and a DVR that records 4 shows at once, we'd be in TROUBLE. We have a fairly large TV in our bedroom and it is what we call "quality time" together. The hard part is sometimes finding something we BOTH like. If we are together in there, we pretty much always compromise on the programming.

We haven't had a tv in our bedroom yet. And, I don't think we ever will. But, if it was just regular TV, I bet it wouldn't be too appealing anyways... And those rabbit ears- totally a decorating statement!

I haven't seen rabbit ears in FOREVER. And here I am thinking we sacrifice because we don't have HBO. Husband and I are so addicted to TV that we would need some sort of rehab if they took our TV away.