OK NOW I have met my match

Remember how I once thought I had found something that could not be bought on Craigslist? And then I SHOWED Craigslist who's boss and brought our new couches home to do their job of making my living room not look like a frathouse?

Well since then I've shopped for a number of other things. No purchases yet, but I'm just learning the market right now while I wait for the right moment. The right moment will present itself when a major mechanical element of one of our cars falls onto the road while one of us is driving. Or maybe it will be the next time my car dies on the access road to the highway, forcing me to sit there trying to start it while Charlie sings "Car broken! Mama fix it! Needs new batteries!" and laughs hysterically at the pitiful rrr-rrrr-rrr-rrr-rrr noise it makes as it struggles to turn its geriatric self over. It's a roll of the dice, really, anytime one of us gets in the car. But that is a story for another day.

We have been working on the garden in front of our house. When we moved in it was beautiful, but we haven't touched it all year and it was getting kind of wild looking. For example, after great effort, much swearing, and more persistance than I will ever have, Ryan pulled this little beauty out of the garden on Sunday: My dad looked at this picture and said "Oh, that's a Japanese Orchid!" and I immediately felt guilty for giving it the old heave-ho. But seriously, it was so big I think it was kill or be killed. The other one that we didn't have the strength to rip out on Sunday is still there and it is starting to bloom and it's quite pretty. So, um, oops?

Here is the before picture of the whole garden, seven hundred pound weed of doom is on the right: Those cascading white flowers on the left would be pretty if they didn't almost swallow Charlie whole every time he passed on the sidewalk.

We ripped almost everything out (everything except for Bride of Weed of Doom slash Japanese Orchid) and now we are left with a pitiful, empty garden. While at the grocery store today I found some items that I thought would look nice in the empty space. My favorite, a metal chicken statue that holds a flower pot, will have to wait for my birthday since I don't think the the other half of my landscaping team will deem that an wise use of $30 of our landscaping budget. I know! Why not?! I also fell in love with a statue of St. Francis surrounded by birds and woodland creatures. It reminded me of my grandparents and the garden they had behind their house. My grandfather was very proud of the garden and it was beautiful. I didn't really "get" the kind of work and know-how required to have such a beautiful garden at the time, but I do now. My grandma has a St. Francis statue inside the house and she refers to him as Frank, which always cracked me up. Nostalgic as I was, I couldn't justify spending the money impulsively, so I resigned to look around some more to find a St. Francis for our garden.

My first stop was Craigslist, my faithful purveyor of gently used household items of all types. A search of "St. Francis Statue" produced zero results. So I tried "Francis Statue" and "Francis." No luck. Then I tried "garden statue" and was rewarded with this: 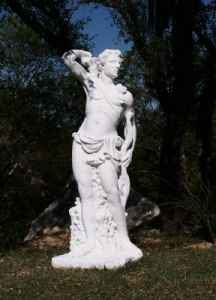 And as much as I think a six foot statue of Adonis would add to our curb appeal, I just don't think it's appropriate for all of the small children living nearby (maybe we could class it up with some marble columns --"elegant, sturdy, and bursting with class!"). Not to mention the group heart attack it would cause over at the HOA. First the striped swing set awning and now THIS! They would have our faces on a deck of cards.

It may be time to go to a real store. Sigh, the streak has been broken.
Posted by Becca at 12:00 PM

You can likely divide your weed of doom into three clumps and space them out in your front planter, lending a nice frame into which to tuck your new plants as you get them. Now that you're enjoying craigslist, have you heard of Freecycle? If there is one in your area, it is a super source of free plants. Each year everyone has to thin their perennials, and our freecycle fairly hops with offers of clumps of lovely flowers that all you have to do is prune back every 3 or 4 years. I LOVE a garden that comes back each year on its own!

Hey I wouldn't have known it was a Japanese Orchid either. The word orchid summons images of things that are delicate and...um...small. This thing is like something out of Little Shop of Horrors. Nothing personal.

I guess that is a lesson learned for the rest of us - before pulling a "weed" - check to make sure it is a weed and not a flowering plant. We were surprised last fall when a "bush" in our backyard blossomed with nice purple flowers!

Ha! My friend's neighbor had the CREEPIEST st. francis statue in his back yard. The head was made out of a mailbox- no joke! And we'd be over his house, doing things we weren't yet old enough to do (ahem) and it'd freak us out EVERY time!

We ripped out all of the stuff along our back fence last spring (we means Josh) where a garden once was and STILL haven't done anything with the space.

OMG-- that thing is HUGE!! And Charlie is SO CUTE