I wouldn't say that I was ever the type of person to completely rule out strapping my kid to a chair for discipline infractions. But it's not something you ever actually picture yourself doing or include in your mental discipline plan that you come up with in the middle of the night while you are pregnant and too terrified to sleep after watching SuperNanny. And yet, there you go: 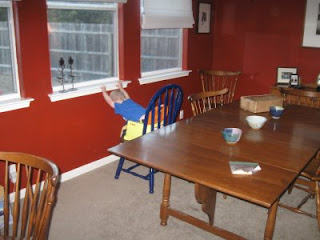 Our time out spot is the floor where that chair is, facing the wall. We were having a perfectly nice time playing on the floor when for no reason at all, Charlie leaned over and swatted Wesley on the face (!!!). "CHARLIE!" I shrieked before remembering that I'm supposed to "respond, not react." "We do NOT HIT." I carried him to the "Naughty Spot" and sat him down facing the wall. "You are here because you hit Wesley. You may NOT HIT ANYONE. Two minutes!" I walked away.

Ten seconds later I heard giggling. The offender was on his belly, commando crawling under the dining room table. I picked him up and carried him, still giggling back to time out. After many more attempts at escape (on the order of fifteen, but I don't know exactly) he finally resigned himself to sitting there for two minutes. He sat moaning and yelling "What are you doing, Mommy?" (I wanted to answer "I'm eating cookies where you can't see me!" but resisted) on the floor.

When his sentence was up I knelt and said to him "Charlie, you are in time out because you hit Wes--" but before I could finish he swatted me across the face! And laughed! A crazed psychopath kind of laugh that I distinctly remember from my own childhood as meaning "I'm going to see just how far I can take this before I get sent to bed without dinner."

I got up, went to the kitchen, got his chair, returned to the dining room, and strapped him in to the booster seat. In my best scary-calm voice I said to him "You DO NOT hit Mama. You SIT HERE for FIVE MINUTES."

Apparently, while I had his attention we also should have covered toy throwing, which is a growing problem here and, apparently, at the church nursery, where it was occuring to such a degree that we had to talk about it when I picked him up, but that is another post.

After he tucked Charlie into bed, Ryan came downstairs and said "Charlie said he hit you and that he's sorry." Is just happy that Charlie touched him.
Posted by Becca at 5:29 PM

You are a saint. I need to take notes for when it's time for us to have little ones! Will you write a book? :D

OH, I am already resorting to locking AJU5 into her chair when she refuses to listen! Mainly it is because I can't safely cook dinner and have her under foot opening the cabinets and pulling EVERYTHING out. I am glad he got the message though!

This post breaks my heart a little, but in a good way. Well done! Excellent parenting there, Becca.

Jack is also just happy to be touched! ha!

I take it this is the start of the terrible twos? Sounds like you are handling it brilliantly!

I'd buy your "On Having It All" book. I'm seriously going to have to go back to earlier posts two or three years from now so I can follow along with my own!

Scary-calm voice. LOL. I know that one.

Well done. And the Wesley caption is FUNNY.

Oh, my heart saddens to hear that this is, no doubt, in my near future. I revel in the fact that my kids don't yet know that they don't have to stay where I put them. Sigh. I guess it is good I kept the booster seat with straps.

Did you read the comment my sis Jen left on the recent Pequita post? Her son is a sweet boy, and yet...I can see Monito getting there. He already throws toys with reckless abandon, and damned if he doesn't have really good aim.

Sounds like you are off to a good start there. I like the respond not react method. I can't watch those out of control kids and struggling parents on Super Nanny. It's too painful. Luckily I'm past all that. whew!