We all knew it would come to this...

Because everyone who blogs about their kids ends up talking about poop at some point, right? Tonight, Ryan was putting Charlie to bed and I was downstairs "relaxing" on the couch when I heard Ryan exclaim "YOU POOPED! GREAT JOB! YOU POOPED! GOOD BOY!"

We are not potty training right now, but let Charlie sit, pantsless, on his potty or on the big potty when he is interested. He particularly enjoys using toilet paper and flushing. He doesn't realize yet that as a boy, neither will really be expected of him until he gets married one day.

Tonight he asked Ryan if he could sit on the potty, so Ryan got him situated and HE WENT POTTY. They then came downstairs, Charlie diaperless in his pajama pants, so we could all celebrate together. Charlie was a little overwhelmed, but later Ryan was getting him ready for bed and Charlie related the experience.

This afternoon I finished the nursery alcove. I found the cute crib bedding on Craigslist and we went to pick it up last night (in the middle of NOWHERE from this hippy lady who was expecting her second and had decided to cosleep and talked to us for several minutes with her shirt pulled up around her boobs stroking her tattooed belly). It came with a crib mattress which we are using as Charlie's crash mat to go beside his bed (he hasn't fallen out in a while, though). 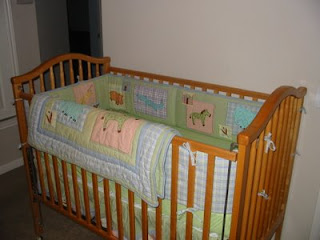 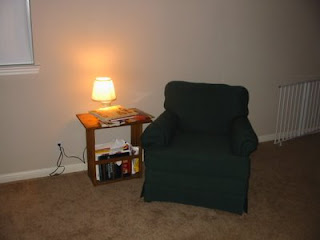 And of course, the giant mess of a changing table with TWO sizes of diapers on it. (Ryan on Sunday: "Why did you buy all these tiny Pampers?" Me: "I know right? They're for the BABY who's going to LIVE HERE in TWO WEEKS. I was surprised too.") 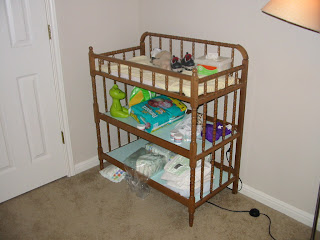 The nursery completion was spurred by the huge number of BH contractions I had all day. There were like three an hour, including ones that occurred during the walk around the culdesac, the shower, and the nap that the nurse said would make them stop if they were not real. But they are still quite irregular and weak (ish, there have been a couple of doozies). I don't expect any action soon, but I will keep you posted.

UPDATE: Heh heh, THAT WAS WEIRD! No babies yet. Contractions have left the building!

Also, you never freaking know-- I had a few of those at the mall 2 days before the real thing-- super excited for you guys!!!

Also, we've ramped up the potty training because 2 sizes of Pamper?? REALLY expensive.

that is the EXACT bedding that we had for H! i have extra border if you want it.
love the poop on the potty! go charlie!

Way to go Charlie! Keep that up and your Mommy and Daddy will be very happy!

Those tiny newborn diapers are so charming! Just like little pocket handkerchiefs.

Hurray for pooping on the potty!!

and I am laughing at the hippie lady with the tattoo'd belly!

Congratulations! Maybe you don't have to change two sizes of diapers for all that long. Although maybe I should mention that we went eight months between the first and second potty pooping successes.