We're done! Except for, you know, the giant mound of stuff that we moved into Bravo's "room" while we were working on the other rooms and have not since touched since we've been spending our evenings busy with our Blue Bell ice cream and all the yelling at the TV that has to be done when the only thing on is the RNC. 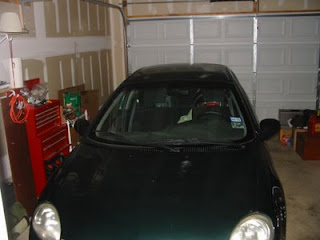 If I had known how nice it is to not climb into an erupting volcano every afternoon when it's time to go get Charlie I would have done this a LONG time ago. Also, Charlie gets to push "the button" twice every time we go out. This makes him very happy. On the way home he starts asking for "the button" about half a block away. Then when he pushes the button and the door goes up he gleefully shouts "UP UP UP!" from the back seat, marvelling at his power.

If you squint you can sort of see the SECOND CAR SEAT behind the driver's seat. Holy mother of pearl we're gonna have TWO KIDS.

Here is "Ryan's side" of the garage, heh heh. 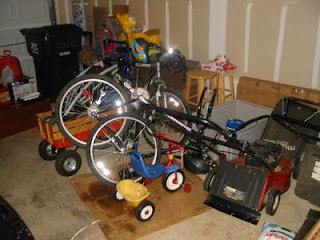 Have you ever seen so many wheeled things in your life? Eleven of those wheels are inflatable and frequently flat which keeps Ryan busy with his compressor and patch kit. I contribute by rolling the jogger through the park and picking up thorns. Only in Texas can thorns at a children's park puncture TIRES. Gee, whattayathink that would do to a tender little 2 year old knee?

Next up, the guest room! Remember what it looked like just after we moved in. Fortunately none of our guests have developed PTSD after waking up being patted to death by an army of pastel colored clowns. Remember how I said I hated painting? Turns out I hate it just a little bit less than I hate pastel colored clowns. 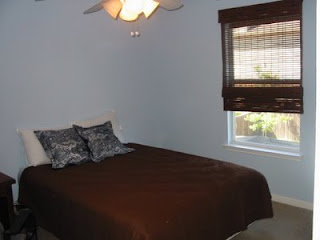 OH MY GOSH is this house inhabited by ADULTS? (Well, adults who still haven't bought pillow cases to go with the new quilt. But rest assured, if you come visit us, I will find some pillow cases. And you will not be attacked by circus folk). Not pictured: framed art that will go over the bed. That "limit your color palatte to two main colors" advice they are endlessly spouting on HGTV is SOLID GOLD. I won't go into how much our old house looked like a nursery school.

Also, our bedroom has curtains and the stairs have a baby gate, which makes the post-bath hysterical naked running around (Charlie, of course) a lot safer (and less visible from the street).

(My parents came over this weekend and helped us start and finish all these jobs. Also? They brought Congo Bars. Big thanks. HUGE.)

Looks good! And it isn't just Texas with the huge stickers! Although they call them Goat Heads here...

We moved into a peach house back in 2004, and I never realized how much I hated that color until I had to paint every single room to remove all traces of it.

I am soooooooo jealous of all of your garage space. And bedrooms.

We've been watching the RNC on mute. It's much, much nicer that way.

And I love the chocolate brown and light blue color scheme in the guest room. Love.

Wait, wait! Are you telling me that cars are supposed to go INSIDE the garage? 'Cause there's nothing but crap in ours and none of the cars will fit. Even if they did? Still too much junk and nowhere else to put it. Love the bedroom colors.