I just got back from meeting my new friend NT and her son E at the library today for story time, which is an hour set aside for mothers to sing silly songs in English and Spanish while the toddlers sit on a big quilt together and fight over pacifiers. Charlie was only mildly interested, but when The Dog Named Jack who said Quack popped out of the jack in the box his face lit up and he exclaimed "KITTY!!"

(After storytime we met up with some other friends for lunch. Charlie the fruitbat ate an entire Clementine, several pieces of pineapple, a piece of honeydew, and about five large blackberries in addition to his grilled cheese.)

Anyway, we looked at some more houses this weekend. We eliminated the one we both loved so much (brand new kitchen, deck, cul de sac, trees) because the layout was awkward and felt small (even though it wasn't that small... we really can't figure it out). We almost talked ourselves into this huge four bedroom house (yeah, I was surprised it was in our price range too). It badly needed a kitchen upgrade and some other cosmetic improvements, but it was clean and in great condition. But then Ryan found that a house we had completely ruled out had reduced its price a substantial amount.

The first house, which we call the Big House (see Fig. 1) was a no frills cube but we've talked for hours about the neat ways we could spruce it up. The thing we kept coming back to was "All that SPACE!" When we visited it we went around the corner in the hallway upstairs to discover ANOTHER turn leading to one more surprise bedroom. Also the carpet was so fuzzy and inviting I wanted to take off my shoes and lie down. 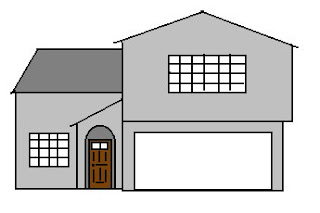 The other house, that we had originally ruled out, we call the Greek House because the cheesy attempt at the "Tuscan" look (that I already dislike even when it is done well) made by the current owners make it look like a bad parody of the house on My Big Fat Greek Wedding (think Costco firesale with lots of metal and glass and shiny metallic curtains and the largest, tackiest four-poster canopy bed you've ever seen; really? a canopy bed for adults?).

Without the furniture it is a nice enough house (although my memory of it is a little fuzzy as I was distracted most of the time by the horrible shiny gold curtains thumbtacked to the walls around the windows). It is smaller than The Big House, but has an extra bathroom and a very pretty kitchen. The problem is the facade (Fig. 2). Where The Big House was understated and welcoming with two pretty oak trees in the front yard, The Greek House is intimidating and stark with a giant window over the front door which allows people driving down the street an unobstructed view into the door of the master bedroom (and also a nice view of the absurdly large but somehow still very cheap looking chandelier hanging over the foyer; I am not a fan of the conspicuous consumption look, you might have noticed). 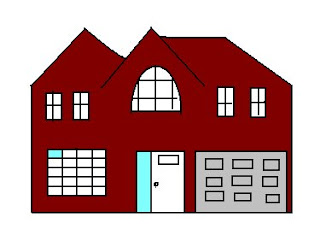 So anyway, it is hard to explain why I still prefer The Big House now that The Greek House is on the market for the same price, especially because The Greek House already has a nice kitchen. But The Big House just feels more like us for some reason. That feeling is very difficult to convey to our realtor who I am sure finds it extremely frustrating that I have made my mind up about many houses before we pull into the driveway (and make more frequent comments on features like "baby-gate-ability" than lot size, exterior material, or any other quality she could actually use to narrow down the listings).

My new friend said she and her husband looked at eighty houses before they picked one. I really hope it doesn't take that long.
Posted by Becca at 6:22 AM

I freaking love your figures. I also do consume conspicuously. Have fun with the hunt!

Someone Being Me said...

I would keep looking. If neither feels exactly right then wait. Buying a house is such a big commitment it would be terrible if you moved in and regretted it. I love my house but I wish I had held out for a 4 bedroom like I originally wanted. And more storage space!!!

That's a tough call. Kitchens and bathrooms are the most expensive rooms to build/remodel, and that's certainly something to factor in when buying a house where a kitchen needs an upgrade. Still...making a place your own is what it's all about. Good luck!